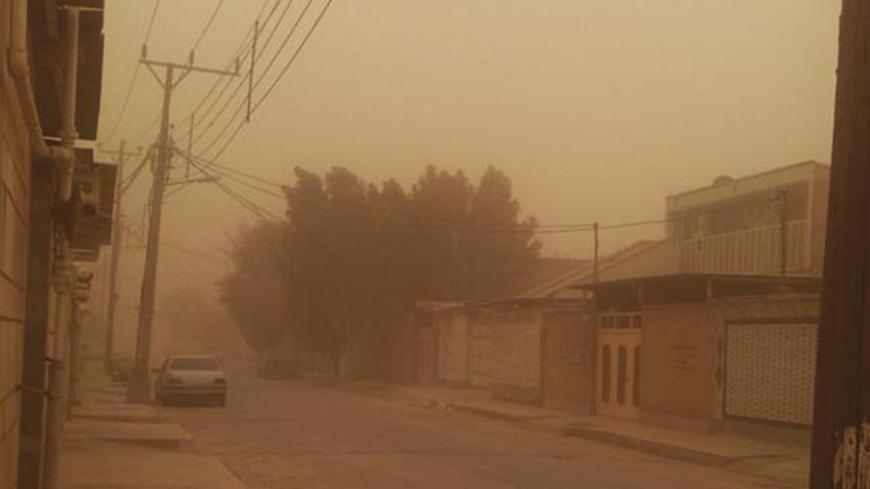 Eleven cities in Iran’s southwest Khouzestan province have shut down offices and schools over excessive dust particles in the air. Iranians tweeted pictures of buildings and streets covered with dust with the hashtag #Khouzestancantbreath while officials and politicians used the opportunity to take a shot at the administration for its lack of a comprehensive plan to address the crisis.

The Khouzestan Province Crisis Center asked the offices in the capital Ahvaz and major cities such as Abadan and Khoramshahr to close and for pregnant women and those suffering from respiratory problems to stay in doors.

Environmental officials for Khouzestan said that in some cities, the dust content per cubic meter was 66 times permissible levels.

Officials have given various reasons for the dust storms that have plagued parts of Khouzestan in the past week, such as the decrease in rain in the province, the drying of the wetlands and the failure in neighboring countries such as Iraq and Saudi Arabia to cover soil with mulch.

Iran's Vice President for Environmental Affairs Massoumeh Ebtekar met with parliamentarians from Khouzestan Feb. 5. She said that compared to last year, Khouzestan only experienced nine “emergency days,” whereas the year before, the province experienced 33. She said that she was not opposed to the criticism of parliament members, but that she wanted critics to take into consideration the improvement in conditions. She added that long term plans are needed, and that this process has already started.

She also wrote on her Facebook page yesterday that she had met with six different agencies and they have devised short and medium term plans to address the dust crisis in Khouzestan. She added that the plans will be confirmed and communicated by Chief of Staff Mohamamd Bagher Nobakht.

Many officials were not satisfied with her comments, however, and have continued to voice their criticism.

Tehran Mayor Mohammad Bagher Ghalibaf, a conservative who ran in the last presidential elections, said, “Today our main problem is the environment, and we cannot say that the environment is endangering people’s lives — we must say that the environment is taking people’s lives.” Addressing Ebtekar, Ghalibaf said, “You might say there is a problem with the budget or the law, but in my opinion these are preliminary problems and we have not even been able to use the budget in the legal capacities that we have.” Tehran is no stranger to shut-downs over pollution, usually due to smog. On June 2, 2014, a major sand storm hit Tehran, temporarily closing down the city.

Parliament member Ismael Jalili from Masjed Soleyman also voiced his displeasure, saying that for years, there have been warnings about this crisis. Jalili blamed the Energy Ministy for its poor management of the wetlands, rivers and springs in the province.