The administration of President Hassan Rouhani has declared that it has made great strides in combating dust storms and pollution in Iran’s southwestern province of Khuzestan, but the region appears to still be in the grip of recurring environmental crises. 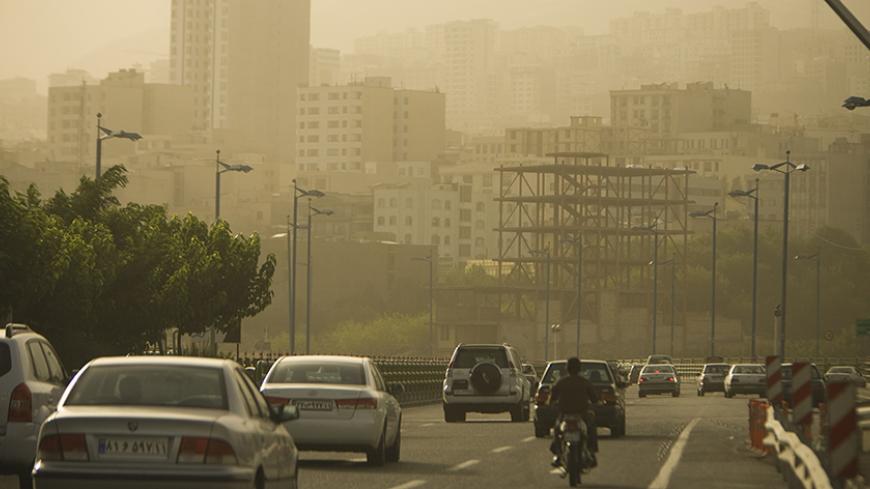 A massive influx of dust storms in recent weeks has once again paralyzed Iran’s southwestern province of Khuzestan. The province has been reeling from dust storms since the early 2000s, a problem which often leads to schools and government offices being closed, power, water and internet outages as well as residents being rushed to hospitals with respiratory complications.

The recent crisis in Khuzestan prompted protests not only on social media but also on the streets of Ahvaz. In an attempt to address the crisis, two provincial officials were dismissed while President Hassan Rouhani and two of his Cabinet ministers traveled to Khuzestan to examine the situation — or, in the words of Ahvaz’s deputy governor, to “sympathize” with the people ahead of the May 19 presidential elections. Just days before Rouhani’s trip, Supreme Leader Ayatollah Ali Khamenei also criticized the management of the crisis, saying, “If someone is concerned about the people, they cannot remain unmoved in the face of the difficult problems in Khuzestan.”

Mohammad Darvish, the director-general of the Department of Environment’s Public Participation Office, told Al-Monitor, “Due to its location next to natural deserts such as the Arabian Desert, the African Desert and the world’s dry belt, the Middle East has always grappled with sand and dust storms. However, the increasing dust seen in recent years in Iran’s southern regions, and especially Khuzestan, has many internal and external origins that have ultimately left us faced with the most unprecedented and destabilizing ecological phenomenon and placed the region in ecological debt.”

Darvish said he believes the main origin of the dust is Mesopotamia, the area between the Tigris and Euphrates rivers that spans from Turkey and Syria all the way down to Iraq, Iran and Kuwait.

According to Darvish, the number of dust-producing centers in Mesopotamia has risen from six in the early 1980s to more than 320. He told Al-Monitor, “This is due to the Turkish government’s ‘Great Anatolia’ project [one of the largest river basin development projects in the world] in the region, which is choking the Tigris and the Euphrates. By building large dams such as the Ataturk dam, Turkey has contained about 80 billion cubic meters of water that should be flowing toward Mesopotamia.”

Darvish added that the implementation of the Turkish project had caused noticeable climatic change in the region and made agricultural lands in Syria and Iraq unusable, creating economic problems for local farmers.

In an effort to solve the dust crisis, Iran’s Foreign Ministry and Department of Environment have been holding talks with Iraqi officials over the past three years. However, Darvish said, “These talks have not produced much result due to the insecurity created by the presence of Daesh [Islamic State] in parts of Iraq. We had this environmental diplomacy with the Turkish government as well. These pressures resulted in the United Nations acknowledging the phenomenon in Mesopotamia as dangerous, and a UN-led summit with the participation of regional countries is to be held in Tehran soon.”

The desiccation of the Hoor al-Azim or Hoveizeh wetland, which lies between Iran and Iraq, is seen as another source of the dust. This has also been a point of conflict between Iran’s Department of Environment and environmental activists. According to Darvish, the dust sources in this wetland originated under former Iraqi dictator Saddam Hussein following the creation of the Fifth Stream in Iraq, also known as the Saddam Stream. The project changed the directions of the Euphrates and Tigris rivers, leading to the gradual drying of the Iraqi portion of this wetland — a fate that the Iranian side of the Hoor al-Azim has also been grappling with in recent years. Protests by environmental activists have turned the revival of this wetland into a priority for Iran’s Department of Environment. Darvish told Al-Monitor that Iran’s dried wetlands, including Hoor al-Azim, are “victims of the thinking that dominates water management in Iran.”

Based on statistics provided by Department of Environment chief Masoumeh Ebtekar, this wetland has regained 70% of its water during the past three years, a point which Ebtekar highlighted as an environmental achievement by the administration of Rouhani. However, environmental activists in Khuzestan disagree with the declared revival.

Pointing to the drillings by the National Iranian Oil Company and the drying up of the internal part of this wetland since the Iranian year 1390 (2011-2012), Fereshteh Tabanian — a lawyer and environmental activist in Ahvaz — told Al-Monitor, “A revival of this wetland would mean that fish and birds can live in it. But we don’t see this here. The relay of this false information is a problem, and we pointed this out when Ebtekar and Rouhani visited the province.”

Tabanian referred to domestic environmental issues, unrestrained dam construction and the inter-basin water transfer projects in Iran as other external sources behind the dust, and said these factors have caused some regions in Khuzestan and the western province of Ilam to become additional dust sources, causing a national crisis.

Dealing with environmental issues was among Rouhani’s main campaign promises during the 2013 presidential elections. This is while Tabanian said the key demand of environmental activists in Khuzestan has been for the government to allocate a larger budget to resolve environmental problems — especially in terms of the dust.

Following the crisis created by the dust storms in Khuzestan and the increasing protests in response, the Iranian parliament’s planning and budget commission on Feb. 25 approved a $100 million budget for combating dust storms in the coming Iranian calendar year, which begins March 21. Pointing to the oil and natural gas resources of Khuzestan, Tabanian said environmental activists hope their protests will bring more attention to budget hikes for the province. She told Al-Monitor, “The air in Ahvaz is very polluted even without the dust. The World Health Organization ranked this city as the most polluted in the world in 2011. We had only 11 days of clean air in the first nine months of this Iranian year [ending March 20].”

Meanwhile, Darvish says that with the determination of the Rouhani administration to resolve the crisis and with the wealth and resources of the fertile plain, he expects an “exceptional spring” for the province in the next five years. He told Al-Monitor, “There is no region in the Middle East like Khuzestan, where about 30 to 40 billion cubic meters of water, or 33% of Iran’s total surface waters, are flowing. I believe that if our water rights are returned, the natural wetlands of Khuzestan will be revived again, the western part of Karkheh River will be biologically stabilized in Khuzestan and we will quickly witness climatic changes in this province.”