Despite the government’s measures, southwestern Iran remains mired in a deep environmental crisis. 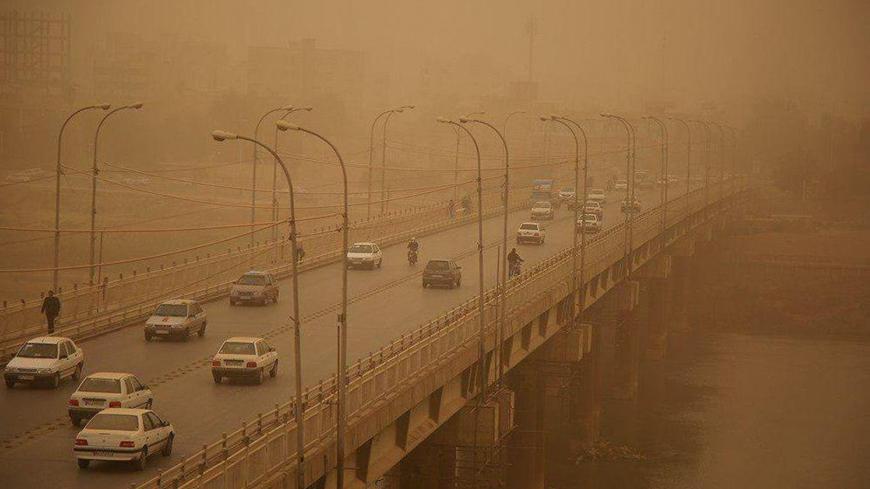 The air in Iran’s southwestern province of Khuzestan is no longer safe to breathe. Although the region has been dealing with dust and sandstorms for over a decade, it seems that the situation has only become a crisis in recent years.

Iran’s petroleum hub of Khuzestan borders Iraq. The province was a front line during the 1980-1988 Iran-Iraq War and suffered extensive damage during that time. Yet it has remained Iran’s main source of income due to its oil. As for the destruction from the war era, it has yet to be removed from the landscape. Burned walls can still be seen in the cities of Khorramshahr, Ahvaz and Abadan. However, it seems the challenge facing Khuzestan residents now is the daily dust and sandstorms, making breathing difficult for the people there.

Iranian experts have differing opinions about the source of this problem. Initially, they thought the dust pollution only had an external source, with the particles coming from neighboring Iraq. This viewpoint has changed over time, however, and many attribute internal mismanagement to this permanent environmental crisis in Iran.

According to Kourosh Bahadori, Khuzestan's chief meteorologist, “There are different reasons for this situation. It has an external source [coming] from Iraq, but there is not much hope this can be improved since the Iraqi government has officially announced that it is facing bigger problems, like the fight against terrorism, and has no plans of alleviating the problem in the next decade. It also has an internal source, which is drought and excessive dam construction.” Still, the environmental impact of the Iran-Iraq War is viewed as perhaps the most significant reason behind the issue.

While attending a meeting with Iranian officials in February 2017, Iraq’s Ambassador to Iran Rajeh Saber Abboud al-Mousavi said, “Maybe a great portion of Iran’s dust problem has its roots in Iraq. But don’t forget that Iraq is fighting Daesh [Islamic State] on behalf of the world. Therefore, Iraq should not be pressured more than its capacity. The main problem here is weak international relations.”

However, another part of the problem is the impending water crisis the region is facing in the coming years, which is believed to cause wars and catastrophes as ethnic and religious disputes between nations give way to water disputes. In fact, the water situation in the Middle East has reached dangerous levels and is expected to further intensify as days go by given continued regional wars, persistent droughts and low rainfall.

This situation has also had many domestic consequences for Iran’s political players. On May 17, 2017, Iranian President Hassan Rouhani traveled to Khuzestan province as part of his presidential campaign. At that time, dust pollution had reached dangerous levels, making breathing extremely difficult. Despite the unfavorable conditions, Rouhani received a warm welcome from his supporters, who shouted slogans such as, “We have no air, but we have your back” to express their support for the president.

During his election campaign, Rouhani had stated there were no short-term solutions for the problems caused by the dust storms. He had also noted that correcting the impact of previous poor policies, and especially those of former President Mahmoud Ahmadinejad, would require time. Yet as Khuzestan’s pollution worsened in the months of November and December 2017, so did the criticisms against Rouhani.

Various campaigns were launched on social media to draw more public attention to the environmental challenges faced by the people of Khuzestan. At the same time, the Rouhani administration proposed $150 million in its budget for the upcoming Iranian calendar year (beginning March 21) to combat sandstorms and dust storms in southwest Iran. Unfortunately, a parliamentary commission rejected the proposal on Jan. 21 — a move that was strongly criticized and even led to the questioning of the president during a live televised interview Jan. 22. Responding to a question about dust storms in Khuzestan, Rouhani said, “As I mentioned previously, this is something that takes time, not to mention that it is not just a domestic matter. Foreign policy is also needed here. We are trying to pursue both avenues simultaneously. Discussions have been and are being held on issues such as planting seedlings, creating canals or using the Karun River for irrigation, but of course, they will take some time to show results.”

In another part of the interview, Rouhani commented on his proposed budget being cut by parliament and said, “Of course it has not been completely rejected or ratified in parliament. But even if this were so, I promise to provide the budget through other sources and implement the plan.”

These are not the only measures taken by the Iranian government for solving the problem of dust storms. On Dec. 20, 2017, the United Nations approved a resolution proposed by Iran on combating dust and sandstorms. Tehran also hosted the second meeting of the Governing Council of the Asian and Pacific Centre for the Development of Disaster Information Management (APDIM) on Jan. 30-31. APDIM is a center affiliated with the United Nations Economic and Social Commission for Asia and the Pacific (ESCAP). In its final statement, the meeting called for the need to cooperate and exchange experiences between ESCAP member countries regarding ways to combat dust pollution.

Given these efforts, hopes have increased that this crisis can be alleviated in Iran. However, with diminishing water supplies and continued drought in the region, solving this environmental problem appears far from easy.