Russia and the Kurds

Russia balances its relationships with various Kurdish groups with its support for the states the Kurds live under. 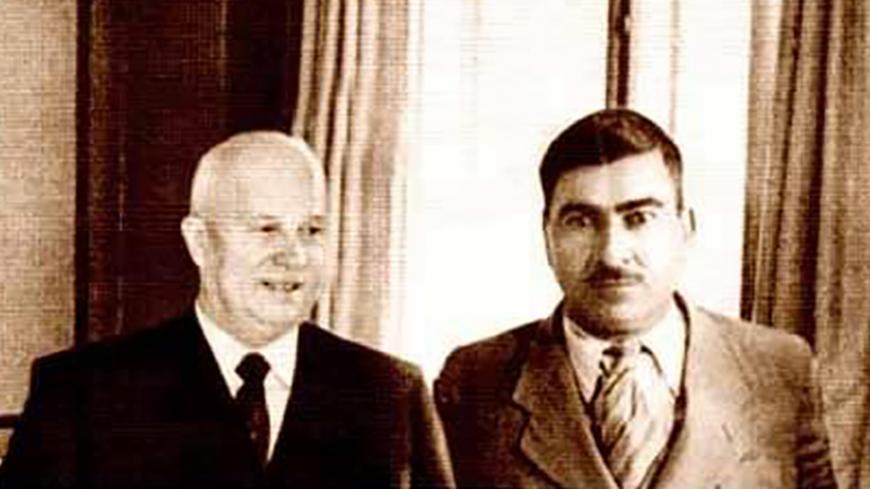 Nikita Khrushchev meets with Mustafa Barzani at the Kremlin in Moscow, 1955. - saradistribution.com

The Kurds’ growing role in the evolving and turbulent situation prevailing in the Middle East and elsewhere affects the policies of regional and global powers alike. Russia is no exception. In recent years, Moscow has taken steps to develop contacts with Kurdish political movements and establish economic cooperation with Iraqi Kurdistan, where Russian oil and gas companies have set up shop. The February 2013 visit to Russia by Kurdistan Regional Government President Massoud Barzani, dubbed by the Kurdish people as the “first official visit,” served as a significant milestone in the development of political contacts. The visit refreshed the memories of developments dating back more than half a century when the Kurds’ historical leader (and Barzani’s father) Mullah Mustafa Barzani lived in the Soviet Union from 1947 to 1958, where he enjoyed support on a number of fronts.

Another recent visit by a Kurdish politician was also a first, as Selahattin Demirtas, chairman of Turkey’s People's Democracy Party (HDP), visited Moscow in December 2014. One would think there was nothing unusual about the visit, with Demirtas at the helm of a lawful Turkish party and, on top of that, having recently run for the Turkish Republic’s presidency in the latest election and having won a tenth of the votes cast. However, there was a certain sensitivity given that Demirtas is opposed to the current authorities while Moscow maintains an unprecedentedly close relationship with the Turkish government. As noted by Demirtas himself, his party seeks to overcome a lack of communications with Russia, as “Russia's policies vis-a-vis the Kurds suffer from Cold War reflexes and are somewhat at odds with reality.”

It is then no wonder that the HDP leader, who considers protection of Kurdish rights a priority goal and, therefore, a topic for discussion in Russia, nevertheless has invariably sought to dispel the slightest suspicion of separatism and positioned himself as a proper Turkish politician during the visit. According to him, the Kurdish factor in the Russian-Turkish relationship, in fact, is being “relegated to a secondary position.” He said in a recent interview, “We would like to discuss the Kurdish issue in the context of the Russian-Turkish relationship without creating any problems for the relationship. However, the matters of democracy and free rights for the Kurds must be resolved.”

In his interactions with Russian political and public figures and entities (including the Oriental Studies Institute of the Russian Academy of Sciences), Demirtas also emphasized that the HDP was a "social party." It is an accident that, while at the State Duma, the lower chamber of the Russian parliament, he met with deputies representing the CPRF (communists) and the LDPR (Vladimir Zhirinovsky’s party). Demirtas was accompanied to the meetings by Salih Muslim, the leader of the Syrian Kurds’ Democratic Union Party (PYD) and a member of the National Coordination Body for Democratic Change.

The caution exhibited by Demirtas is understandable. Notably, at about the same time, Massoud Barzani — who maintains close ties with Ankara and recently made an appreciative remark toward the Turkish government (“Turkey assisted the [Kurdish] autonomy in its war against the Islamic State”) — also made a statement published Dec. 24 in Beirut's An-Nahar unlikely to win any favors with the Turks: “Kurdistan’s independence is a continuing process; it is our right and it is up to Kurdistan’s people.” Of course, he meant Iraqi Kurdistan, yet all the other Kurdish political forces cannot but keep in mind the situation prevailing there.

Demirtas, whose ambitions include leading the Turkish nation, counters an implicit or explicit idea of Kurdish independence with the concept of decentralization, which he explained in his Moscow meetings. He uses as a model the autonomous government in what is termed Western Kurdistan — Syria’s northern area inhabited by Kurds. Demirtas refers to that area as the "Republic of Rojava" (in the Kurmanji dialect of the Kurdish language). He is strongly opposed to redrawing the borders of Middle Eastern nations. His ideal state is a representative democracy whereby all ethnic, religious and other communities and groupings such as the Assyrians, Armenians, Yazidis, Turkmens, and women, etc., should enjoy equal access to all resources, including power, and equal rights on the same footing as the majority community. In particular, the right to use and advance national languages of all groups must be made available.

At the same time, a high-ranking official in Damascus told me, while asking his name not be disclosed, that the concept of the nation’s decentralization under the current circumstances is viewed as a path to the nation’s dismemberment and that no area in the north of Syria features a contiguous Kurdish population such as that found in Iraqi Kurdistan. However, based on the HDP concept, Rojava would have multicultural autonomy not only for the Kurds, who enjoy a numerical preponderance there, but for all communities living in the area. It is within this framework that Kurds’ right to self-determination might be realized. “Ethnic and confessional independence is more important than political independence,” the HDP leader told me.

Official Moscow maintains a relationship of mutual understanding and close cooperation with all the Middle Eastern states where Kurds reside; it does not interfere in their internal issues in any way whatsoever. However, it is clearly sympathetic to the HDP leader’s line in favor of resolving such problems solely through negotiations, something Russia has steadfastly advocated. At the same time, informally, Demirtas’ Russian counterparts cannot but like the idea of decentralization that Russia views as a path toward resolving the internal conflict in Ukraine. Significantly, any kind of decentralization in the Levant is strongly opposed by Islamic State extremists who see their ideal in a strictly unitary state in the form of a caliphate.

During his Moscow meetings, the Kurdish-Turkish politician reaffirmed the HDP’s position vis-a-vis the Kurdistan Workers Party (PKK), namely that the party should be removed from the list of terrorist organizations and that Abdullah Ocalan should be freed. In fact, this might well happen provided that the peace process between the Turkish government and the PKK, which has been set back by the Kobani developments, moves forward.