Fearing setbacks in Kurdish-Turkish relations, Iraqi Kurds have taken to the streets in support of Erdogan, whom many regard as being the most tolerant of Turkey’s leaders toward the Kurdish population. 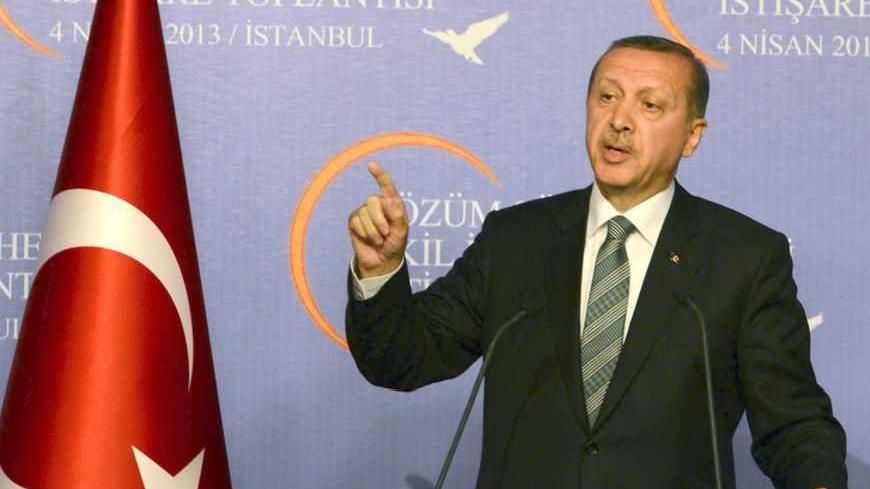 Turkey's Prime Minister Recep Tayyip Erdogan makes his address during a meeting with the Wise Men commission in Istanbul, April 4, 2013, as part of the peace process with the Kurds. - REUTERS/Metin Pala

The square facing the Turkish consulate in the city of Erbil, the largest city in Iraq's Kurdistan region, had been experiencing over the past years demonstrations condemning the policies of the Turkish government headed by Recep Tayyip Erdogan.

Things, however, have changed, and the square has begun seeing demonstrations in which participants hold photos of Erdogan, his party's logo and Turkish flags, while expressing fears of Kurdish-Turkish relations being affected if the demonstrations were to manage to topple the government of Erdogan.

On June 15, 2013, a group of Iraqi Kurds and Turks protested, waving pictures of Erdogan, the red Turkish flags, and the logo of the Turkish Justice and Development Party (AKP) to express their support for Erdogan, who is facing internal protests.

Erbil has witnessed many demonstrations over the past years against Turkish policy concerning the bombing of the border areas of the Iraqi Kurdistan region by aircraft and artillery under the pretext of targeting PKK sites, or failing to grant the country’s Kurds their national and cultural rights.

The Turkish protests started on May 28, against a plan to develop Gezi Park in Taksim Square in downtown Istanbul, but demonstrations escalated and turned into anti-government protests across Turkey in response to the harsh treatment that protesters were exposed to from the authorities.

Lund Mirani, who was speaking in Kurdish and Turkish, led the protest and read a statement to the protesters in which he said they “fear the deterioration of Kurdish-Turkish relations if these opposition-led demonstrations managed to topple the government that is headed by the AKP."

Mirani told Al-Monitor, “We believe that Erdogan is the first Turkish prime minister to recognize the national rights of the Kurdish people in Turkey. He visited the Kurdistan region of Iraq and met with Kurdish leaders, which is an important step. We know very well that the Turkish opposition wants to eliminate all of these gains that have been achieved for the Turkish and Kurdish populations.”

He pointed to the economic relations that prospered during the rule of Erdogan, the arrival of hundreds of Turkish companies to work in the region, and the influx of thousands of workers to work in Kurdish cities in Iraqi Kurdistan, noting that “the Turkish opposition wants to abort these gains under the pretext of cutting some trees in one of the public squares of Istanbul.”

Turkish-Kurdish relations, both at the economic and political levels, have developed significantly as of late, and the most important development in these relations may be Erdogan’s visit to the city of Erbil at the end of March 2011 and his participation in the inauguration ceremonies for Erbil International Airport, the Turkish consulate in Erbil and two Turkish banks. During his visit, Erdogan met with Iraqi Kurdistan Region President Massoud Barzani.

According to the statistics of the Ministry of Trade and Industry in the Kurdistan Regional Government (KRG), out of a total of 2,250 foreign companies operating in Iraqi Kurdistan, about 50% are Turkish companies in the hotel, restaurant or business sectors, not to mention the thousands of Turkish workers who are working on construction projects in the region.

The KRG has strong ties in the oil sector with the Turkish government and companies. Chief among these are those relating to the extension of the oil pipeline that will connect the region's oil wells with the Turkish port of Ceyhan, which will hopefully be completed by the end of 2014.

The KRG says that it will finish an oil pipeline to directly link the region’s wells to the outside world by the end of 2014, or the beginning of 2015 at the latest. Previously, the region’s wells had been linked to the Iraqi-Turkish pipeline that connects Kirkuk with Ceyhan.

Economists and analysts of the Turkish-Kurdish developments confirm that these relationships will be affected if the internal demonstrations and protests in Turkey manage to topple Erdogan's government.

Iyad Ajaja, a political analyst and specialist in Turkish-Kurdish affairs who teaches at the University of Dahuk, told Al-Monitor, “There is internal objection and a fierce opposition within Turkey against Erdogan’s policy regarding the ongoing peace process in Turkey with the Kurds, especially among the AKP and the Nationalist Movement Party, which strongly oppose this policy.”

Ajaj asserted, “There is a continuous economic circle between the region and Turkey, and there is no doubt that in the event of any internal disorder in Turkey, these relationships will be affected.”

The KRG perceives Turkey as the only artery it has to access European countries or world trade on the Mediterranean Sea, especially after the deterioration of the situation in Syria and the inability to continue to trade through Syrian ports.

Ajaj said, “These relations may get tense, not only with the Kurdistan region, but also with all the countries that have advanced economic relations with Turkey.”

Idriss Ramadan, a Kurdish economic analyst and academic, said that if the demonstrations were held for domestic issues and for defending the rights of all of Turkey’s people — including Turks and Kurds — then these relations will not be affected.

However, he added, “If these demonstrations are against the AKP government and aim to overthrow Erdogan, then Turkey’s economic relations with the Kurdistan region will be affected.”

He clarified that, “Since politics and the economy are two sides of the same coin, and given that these relations have evolved and expanded during the era of Erdogan, any change in the ruling system in Turkey will also lead to a coup in Kurdish-Turkish relations.”