Are there any prospects for Moscow-Libya cooperation?

Russian officials are taking a wait-and-see attitude to developments in Libya. 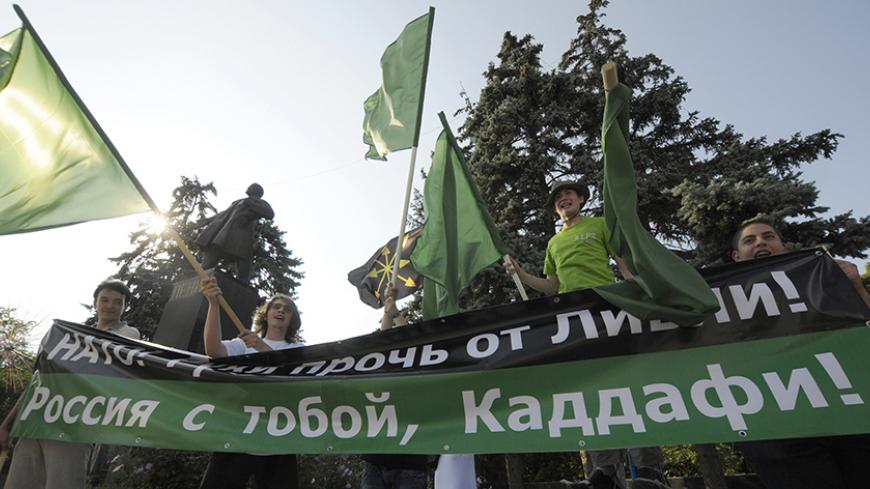 People take part in a rally on July 7, 2011, to support Libyan leader Moammar Gadhafi and protest against the NATO military operation in Libya in the Russian city of Rostov-on-Don. The banner reads "NATO: Hands off Libya! Russia is with you, Gadhafi." He was killed three months later. - REUTERS/Sergei Karpov

Since the fall of Moammar Gadhafi’s regime, Russia has clearly evinced no interest in Libya and there are a number of reasons for that.

First, a de facto civil war in that country and rampant violence perpetrated by gangs and irregular militias make any economic projects in Libya very risky.

Second, Moscow reasonably fears that a sizable portion of the nation’s new political elite views Russia as an enemy due to the latter’s critical attitude to the NATO operation against the former regime.

Third, the prevailing opinion in Russia suggests that Libya has turned into a vassal land for a number of Western nations that are in fact responsible for the developments there and that Moscow neither wishes nor feels an incentive to compete.

Fourth, the Russian expert community believes that the outcome of the fight being waged by rival Libyan groups remains unclear, even though recent successes of Operation Dignity undertaken against radical Islamists under the leadership of Gen. Khalifa Hifter, who is supported by the internationally recognized government in Tobruk, suggest that the balance of forces may change.

An attack against the Russian Embassy has not exactly boosted Russia’s enthusiasm for greater involvement in the Libyan affairs, apart from its commitments as a permanent member of the UN Security Council. As far back as August, former Russian Ambassador to Libya Alexei Podtserob described several scenarios of potential developments in Libya. His first scenario involved a rebel victory, which would mean the country’s “Somalization” because “everyone would start fighting against everyone else: Cyrenaica residents against people of Tripolitania and Fezzan, tribes against tribes, Arabs against Berbers, fundamentalists against Gadhafi supporters.”

True, the Libyan authorities displayed no particular willingness to improve the relationship with Russia for quite some time, at least until the Libyan internecine war entered its active phase. However, in recent months, a number of Libyan politicians have approached Russian officials proposing official interactions and consideration of potential avenues for trade and economic cooperation. In the course of these contacts, they floated concepts of reinstating the economic contracts lost by Russian companies after Gadhafi’s ouster. According to Arab sources, the Libyans suggested an official visit to Moscow by Abdullah al-Thani, the head of Libya’s internationally supported government.

In his recent contacts with Al-Monitor, a high-profile representative of a secular political group wishing to remain anonymous stated that Libya’s disintegration had de facto handed power over to armed militia mafias controlling the nation’s key source of revenues, i.e., oil, and run by numerous criminals released from prisons. The crux of the nation’s problems is the rampant militias, rather than a confrontation between the so-called liberals and Islamists, between federalists and unitary government proponents, or between the self-proclaimed General National Congress (GNC) and the Council of Deputies.

Our source claimed that, with a vested interest in maintaining chaos, militia leaders bankroll army units deployed in areas under their control, and the military has thus been removed from taking part in protecting the nation’s security.

According to the source, while the Thani government effectively has no control over most of the nation save for Tobruk and a portion of Benghazi, the Islamist government of Omar al-Hasi, representing the GNC, openly relies on Libya Dawn militias and lets them do as they please in Tripolitania. Meanwhile, this internecine war might well bring about the nation’s final dismemberment and demise of the Libyan state.

Far from everyone in Russia shares these pessimistic views of Libya’s future. Podtserob noted two other possibilities: One involves the nation’s division along cease-fire lines, the way it happened in China, Korea, Vietnam and Cyprus in relevant periods. The second, most optimistic scenario contemplates a political settlement whereby a coalition government could be established followed by a move toward a federal system. However, the recent postponement of the conflicting parties’ talks, originally scheduled for Jan. 5 under the UN aegis, suggests that the process of potential reconciliation would be exceedingly difficult. However, a number of Russian analysts, who foresee an eventual defeat for the Islamists, disagree with Podtserob.

In fact, under the condition of anonymity, a Libyan representative gave Al-Monitor a highly critical assessment of actions taken by a number of regional and global powers vis-a-vis Libya. He believes that some of them continue to manipulate the differences among various groups and to set them against one another. Thus, France is working to establish control over Fezzan to take possession of local uranium reserves the French need (ostensibly, Paris had been driven by the same motive in Mali). Indeed, these arguments resonate with many Russian analysts. To Qatar, Libya’s disintegration offers a stronger hand in the European market and a simultaneous opportunity to influence the entire region using Islamist groups entrenched in the country. Egypt benefits from the chaos in Libya in that it lets Cairo drive opponents of the Abdel Fattah al-Sisi regime, mostly Muslim Brotherhood members, into exile in Cyrenaica. According to the above source, apparently just about the only country with a vested interest in a stronger Libyan state is Algeria, and a lot of hope is placed on its role in stabilizing the situation.

In regard to France, the Libyan interlocutor’s comments resonate with Russian strategic analysts, some of whom concur with his suggestions. However, others are reluctant to attribute France’s policy vis-a-vis Libya solely to its interest in the Fezzan uranium. However, to the extent these analysts agree on something, it is the opinion that Paris is largely responsible for the chaos in Libya, since France played a major role in destroying Libyan statehood and yet it has been unable to meaningfully assist the Libyans in building a new state.

Regarding Egypt, however, Russian analysts take a different stance and believe that Cairo might play a highly positive role in stabilizing the situation, and that close cooperation between Egypt and Algeria in the matter could make this alternative much more realistic. Similarities between the two nations’ regimes might serve as a factor facilitating their close interactions toward a Libyan settlement. Meanwhile, their good relationships with Moscow might encourage Russians to favor greater involvement in the Libyan peacemaking process. By the way, certain high-ranking Libyan representatives who have approached Russians insisted that Moscow should support the highly professional Libyan officer corps that has been pushed aside, given that a proportion of Libyan officers had studied in Russia and view Russia in favorable terms. Ostensibly, that force could play a decisive role in stabilizing the situation across the nation.

Even though Russia, like many other global players, is unable to obtain accurate information directly from Libyan provinces, Russian analysts have reasons to believe that the Tripoli government, reliant on disparate armed groups, not only has no control over a large section of the territory held thereby, but is also losing support in Tripoli. Among other things, this is evidenced by mass-scale civilian protest rallies against militias and the very government of Omar al-Hasi, which occur on a regular basis. However, does it mean that the existence of a sole political center, the Council of Deputies, could soon be suggested in Libya given that, already at this point in time, it relies on a broad international and, to an extent, domestic support base?

So far, there are no grounds to believe that the Russian leadership sees any reason to substantially gear up its policy vis-a-vis Libya. However, given the changes occurring across the region, it will certainly closely watch the developments in that nation. Significantly, a group of Libyan politicians that have made contact with Moscow suggested that Russia should be the country to table a draft resolution at the UN Security Council denouncing the activities of Libya’s unlawful armed units (militias) and mandating international prosecution of Libyan gang commanders guilty of war crimes.