The Libyan parliament’s call for foreign intervention is unlikely to have any takers, and offers no guarantee at resolving the militia violence plaguing the country. 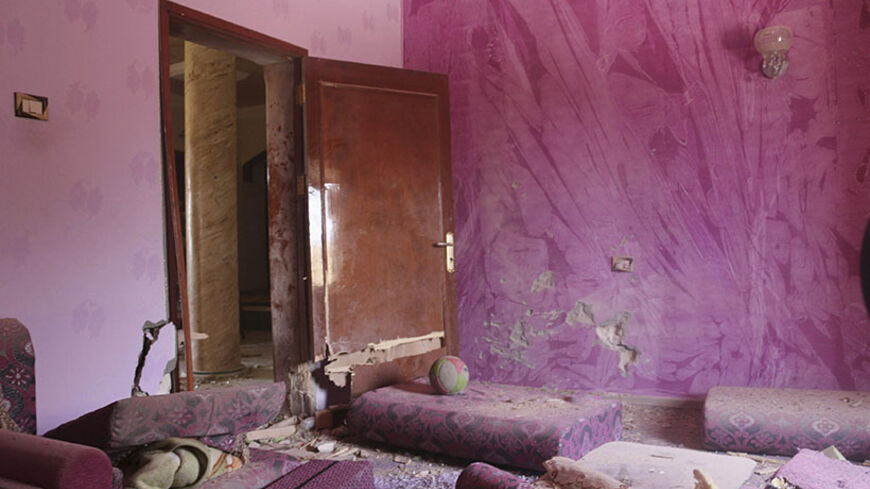 Damage to a house is seen following clashes between rival militias in the Wershavana district of Tripoli, Aug. 10, 2014. - REUTERS/Hani Amara

Among its first acts, Libya’s newly inaugurated Council of Representatives called on all warring militias across the country to immediately cease fire or it will call on the international community to intervene to protect Libyan civilians. Unlike its predecessor, the notorious General National Congress (GNC), the parliament was up to its word. Barely three days after its cease-fire, the parliament, the highest credible legislative authority in Libya, voted for foreign intervention to protect Libyan civilians. Tripoli, the capital, has effectively been under siege since early July when the fighting erupted, leaving its residents hostages to a multitude of shortages of daily necessities, on top of the daily horror of indiscriminate shelling.

Throwing the ball back into the United Nations’ court, the Libyan parliament appears to be embarrassing the international body to take action in Libya. One must remember that the same body helped transform Libya into what it is now when it adopted UN Security Council Resolution 1973 authorizing the use of force against the former Moammar Gadhafi regime in 2011.

However, the call this time will fall on deaf ears, just as the parliament’s call for a cease-fire before went unanswered.

First, the legitimacy of the parliament itself is domestically disputed by certain political players, such as the Islamists, including the Muslim Brotherhood’s Construction and Justice Party led by Mohammed Swan, who publicly endorsed the current attack against the airport. Nuri Abu Sahmin, chairman of the now dissolved GNC, still claims he's in charge and the new parliament is illegal.

Second, the recent fighting in Benghazi and Tripoli has revealed how strong Islamists are today. Since 2011, they have grown in numbers, received more military hardware, and became more entrenched in their political and military positions.

Third, it is unlikely that NATO or any major world power, be it the United States, United Kingdom or France, will answer the call this time, given their previous experience in Libya demonstrated a lack of understanding of the country. Also, no country is willing to risk its soldiers to die in Libya for no clear objective. Air-only intervention will not change the situation on the ground and is bound to victimize more civilians, since most of the fighting, particularly in Benghazi, is taking place within or near residential areas. Finally, and given the complex local situation in Libya, it is hard to see what any intervention could achieve. Tipping the conflict in favor of one party might not be the best for the country as a whole.

What's feasible, however, is some kind of regional intervention led, possibly, by Egypt in the east and Algeria in the west, with international and regional backing. These two countries have been increasingly worried about the deteriorating security situation, which has had serious consequences for both. Egypt is deeply worried about press reports and eyewitness accounts speaking of a Free Egyptian Army being formed and trained in eastern Libya. As reported in Al-Monitor, Algeria is also eyeing closer military ties to Egypt to confront the terror threat emanating from Libya.

Yet, Libyans are also divided over the issue. While they are fed up with their misery and would welcome any sort of solution that could bring them peace and security, they are not yet openly supporting foreign intervention. In eastern Libya, given its historical ties to neighboring Egypt, any Egyptian action that could weaken the fanatics could receive support from locals.

An Algerian role is, however, likely to generate more controversy since Algeria was accused of helping the former regime. In general, tribes across Libya seem to be more open to the idea of limited intervention particularly by Egypt, and an Arab intervention would likely be more acceptable than a Western one.

A member of parliament, who voted against intervention, told Al-Monitor, "I cannot publicly support such action; however, I see it as a strong possible alternative to our nightmare." He declined to elaborate when asked, and requested that his name not be disclosed for safety reasons.

The "legal" framework for an intervention is already in place. Resolution 1973 passed under Chapter VII of the United Nations Charter is still in force and Libya is bound by it. It authorizes countries to use all possible means to "protect" civilians and end the threat to regional and international peace. Today’s fragmented Libya is indeed a threat to its neighbors and unable to protect its own people.

Whether the call for intervention finds any response or not, and whether it actually does happen, is another matter. What is certain, though, is that the complex Libyan situation will remain a largely internal issue requiring Libyans to come to their senses and sit together to claim back their country.

On the other hand, recent history has taught us that outside military intervention has only created more complex problems rather than solving them. Long-term intervention with boots on the ground is likely to suck any intervening party into a quagmire where outright military victory is almost impossible. Libya’s vast territory and difficult terrain make it a logistical nightmare. Should Algeria and Egypt decide to intervene, it would thus be swift and limited, with no guarantees they would be able to eradicate the extremely capable Islamist terror threat.