Could Libya's IS suck Egypt into endless war?

The massacre committed by the Islamic State against Egyptian Copts has raised talk about a new military intervention in Libya, while Egypt is calling for military action against the terrorists. 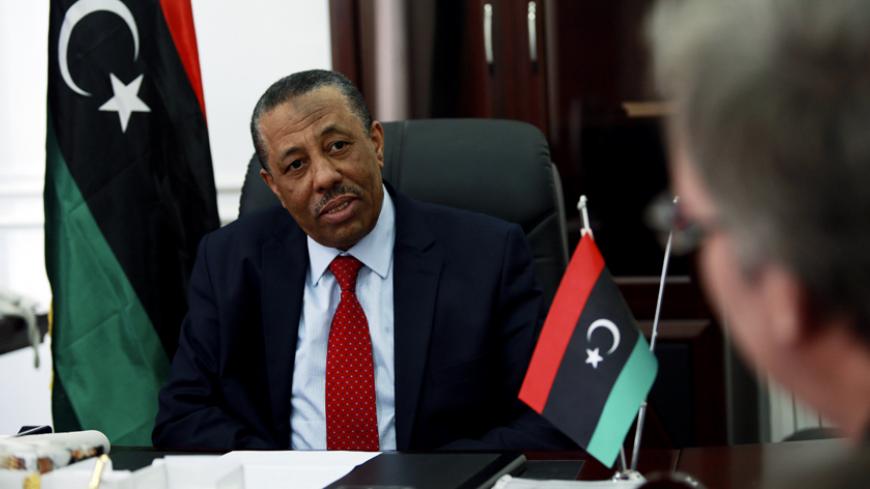 In its classic show of brutality, the Islamic State (IS) terror group committed yet another appalling crime on Feb. 15 by murdering 21 Coptic Egyptians in Libya’s city of Sirte, where the group has been quietly consolidating its presence since it first came to the devastated coastal city a little over a year ago. The trademark IS video appeared to have been well rehearsed and professionally produced to send a clear message of horror intended to terrify and intimidate any opponents.

Residents of war-ravaged Sirte have repeatedly told outsiders of the recent escalating activities of IS in their town. However, Libya’s weak government lacks any control over much of the country, Sirte included, which is supposedly under the control of the Tripoli-based rival government set up by Libya Dawn militias after they overran Tripoli and much of western Libya in August 2014.

The internationally recognized government was quick to offer condolences to Egypt, condemn the murder of the workers and give its approval to the airstrikes launched by the Egyptian air force against IS targets in the eastern city of Derna, where IS first appeared in Libya less than a year ago.

Col. Saqer al-Joroushi, the spokesman for Libya’s nascent air force, loyal to Gen. Khalifa Hifter and allied with the government, said that his forces also took part in the airstrike in which “between 40 to 50 militants were killed,” promising more strikes Feb. 17-18.

Meanwhile, its rival in Tripoli, the General National Congress (GNC), condemned in a statement Egypt’s military action, calling it “an assault against Libyan sovereignty.” In fact, Sirte is supposed to be under the control of the GNC-backed government headed by Omar al-Hassi, which appears to lack control, just like the Tobruk-based internationally recognized government.

Targeting Derna makes sense because the city has long been a stronghold of IS in Libya since a couple of local militias announced their loyalty to the group in October, among them the little-known Shura Council of Islamic Youth and al-Battar Brigades. In fact, Derna has a long history of breeding extremists and jihadists since the 1990s and was the main wellspring of foreign fighters in Iraq after the US invasion in 2003.

On Jan. 28, IS attacked Tripoli’s landmark Corinthia Hotel on the seafront, killing nearly a dozen foreigners, including those of American, French and Filipino nationality. In his statement to the nation Feb. 16, Egyptian President Abdel Fattah al-Sisi appeared ready to take part or perhaps lead an international or regional coalition against IS in Libya like the one currently underway in Syria and Iraq. In a statement on Feb. 17, the Egyptian Foreign Ministry called for action against “IS and other terror groups in Libya.”

The idea of Egyptian military action in Libya is neither new nor unexpected. In fact, it has long been expected since Sisi was elected president in May 2014 and his crackdown on Islamists in Egypt itself. Many Egyptian jihadists found refuge across the borders in Libya, and the arms flow into Egypt has never stopped because of the long and hard-to-control borders the two North African countries share.

Dysfunctional Libya is becoming a serious regional security threat to its neighbors. Since NATO’s 2011 disastrous intervention to force regime change, Libya has not had a stable and strong government, thus becoming a regional magnet for all sorts of criminal activities, including the trafficking of humans and weapons, and the training and harboring of jihadists.

Even though accurate figures are unavailable, it is estimated that thousands of Libyans are living in Egypt. Many of them cannot return home because of the security situation in the country or because the new Libya is hardly able to protect its citizens’ rights and well-being. As part of the larger Libyan population, most of those forced refugees would only welcome any development that could help them return home and lead a normal life.

However, any Egyptian military action in Libya is likely to be risky and could easily backfire on Egypt, which has its own IS to fight in the Sinai Peninsula and almost daily bombings in Cairo itself.

Rather than getting sucked into Libya’s militia warfare, it would be more productive in the long run for Egypt to lead international efforts to help train and arm the Libyan army under the authority of the elected government, which lacks the necessary hardware and expertise to fight terrorism inside Libya.

Egyptian diplomacy, instead of calling for the international coalition to fight IS in Libya, should have started by pushing major world powers, particularly permanent members of the UN Security Council, to reinforce its resolutions on Libya, in particular Resolution 2174, which spells out certain punitive measures against countries, groups and individuals responsible for instability and destruction in Libya.

Such UN reinforcement should have happened long ago, and would have played a more positive role in helping UN mediation led by Bernardino Leon, which appears to have stalled after the latest round in Ghadamis last week.

While Libyans would welcome renewed international help to stabilize their country, the majority of them are sensitive to any foreign military intervention, be it regional or otherwise. This should be always taken into account when deciding on any course of action on Libya.