Poor Egyptian workers in Libya have been threatened and killed by Islamic militias, while Egypt has announced its official support for the Libyan army against the terrorists. 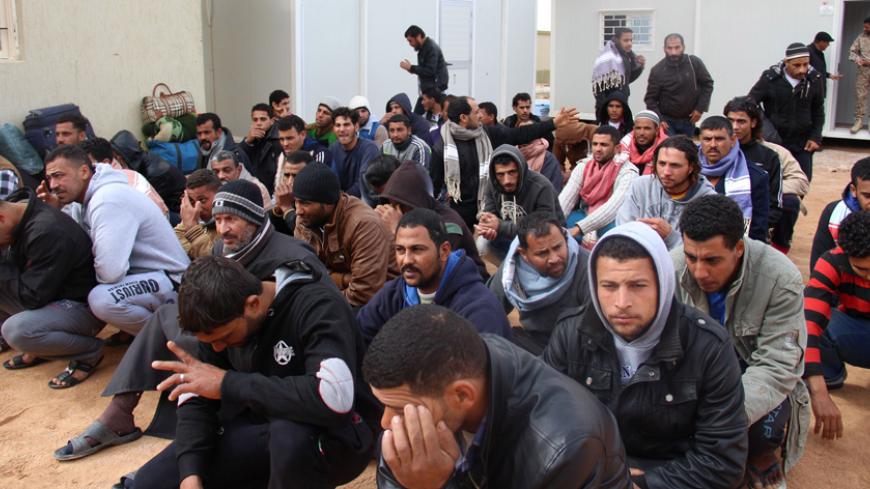 A group of Egyptian illegal immigrants, who according to authorities will be deported, are seen being held at the Alkarareem immigration center in the east of Misrata, Feb. 18, 2015. - REUTERS

CAIRO — By supporting the Libyan army, Egypt has shown official interest in the political and security issues in Libya and the fight against extremist jihadist groups and armed militias for reasons related to Egyptian national security. Meanwhile, Egyptians living in Libya, especially Copts and poor laborers, suffer amid ongoing threats made by organizations affiliated with the Islamic State (IS).

The Arab Center for Research and Studies issued a report Feb. 14 on the situation of Egyptian workers in Libya, be they Muslims or Copts. The report fully blames the Egyptian state for the killing of Egyptian workers in Libya, especially Copts, and it explains that the poor people of Port Said city in Egypt top the list of emigrants to Libya. It pointed out that the killing and security threats suffered by Egyptians in Libya — a community about which no official data is available — show the deterioration of Egyptian workers’ conditions in Libya as well as the absence of legislation and safeguards to protect them abroad.

Ever since the Feb. 16 Egyptian airstrike against IS-affiliated forces in the Libyan city of Derna, Egyptians in Libya, especially Copts, have been facing threats from militias that demand the Egyptian state to stop supporting the Libyan army. Egypt’s strike came after 21 Coptic Egyptian workers were slaughtered Feb. 15 by IS elements on the shores of Tripoli.

Bishwa Hanna, a Coptic citizen from the province of Minya, told Al-Monitor, “We are the only ones paying the price of marginalization and the lack of job opportunities. We are chasing our livelihood as armed organizations target Copts in Libya.”

Hanna, who returned from Libya several months ago, added, “The decision to return to Egypt was difficult because I haven’t found a good job opportunity since my return, despite the promises of the government. Many of my colleagues refused to return due to the lack of a source of livelihood in Egypt.”

The Egyptian government decided to organize the return of Egyptians to their homeland via the Ras Jdir port on the Tunisian-Libyan border, in a move to protect Egyptians from the violence in Libyan territory. The government also banned Egyptians from traveling to Libya via the Salloum port.

Jerjes Fekri, a journalist covering Coptic affairs, told Al-Monitor, “There have been clear attacks against Egyptian Copts in Libya since the events of June 30 and the fall of the Muslim Brotherhood regime in Egypt as seven Copts were kidnapped, shot to death and left in the desert by Ansar al-Sharia on Feb. 23, 2014. Another Egyptian Coptic doctor was killed in his home on Dec. 24, 2014. This confirms the deterioration of the situation of Copts in Libya since June 30.”

He added, “The state is doing whatever it can to secure the return of Copts from Libya, but there are still kidnapped Egyptians, and the state cannot negotiate with groups to protect its citizens.”

Copts in Egypt are still waiting to see if the state will secure their children and other family members in Libya, and they widely welcomed the Egyptian airstrike against armed groups in Libya in retaliation for the IS killing. However, they also voice fears that other airstrikes would increase these incidents against Copts.

“Long conversations with the Copts in Libya have shown me that most of them lack assurances, and they feel that the state’s capabilities are limited to a military response or financial compensation. They do not believe that the state can save the Christians due to the harsh situation in Libya. Meanwhile, saving the Copts and returning them to Egypt is also difficult, especially amid continued threats and fears of another episode of killings,” Fekri added.

The Coptic Orthodox Church of Alexandria had determined the number of Copts in Libya by asking them to submit their names and the areas where they live, as a prelude to coordinating with state agencies to bring them back to Egypt.

Abdul Khaliq explained, “With the gravity of the security situation of Egyptians in Libya, a lot of people still refuse to return to Egypt and prefer to live burdened with security concerns instead of having to struggle to find a source of livelihood.”

With the continued security warnings and risks facing the Egyptians in Libya, serious indications show that the poor Egyptian laborers in Libya could be a ticking time bomb. They could be influenced to join the conflicting parties and bear arms in the ongoing war there. They could also return to Egypt and contribute to the violence there, given the state's inability to contain them and help them find job opportunities.