Egypt is mediating efforts to supply the Libyan army with Russian weapons to fight the Islamic State, a move that might lead to a end to UN Resolution 1973, which bans the provision of arms to Libya. 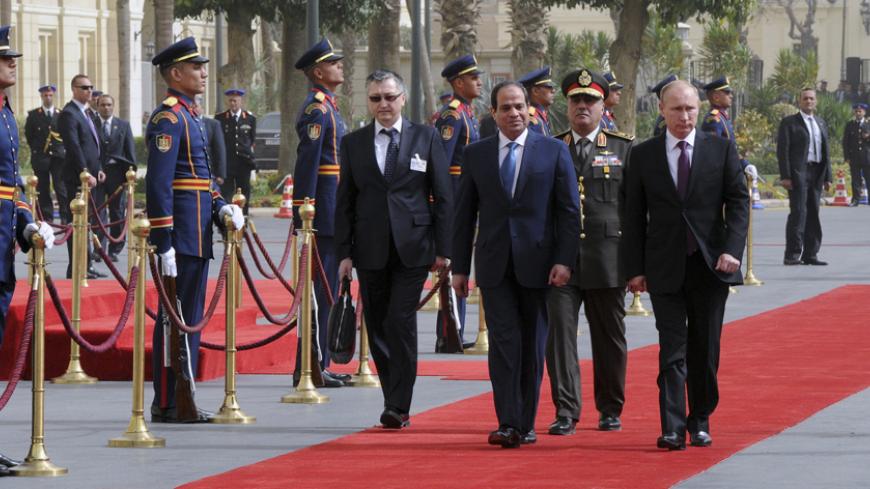 CAIRO — The Libya dossier has now risen to the top of the priority list of the administration of President Abdel Fattah al-Sisi, following an increase in the number of kidnappings and the killing of Egyptians at the hands of armed militias affiliated with the Islamic State (IS) in Libya. The latest such incident resulted in the slaughter of 21 Egyptian Copts on the Tripoli coast, leading to intervention and mediation by Cairo to bolster the Libyan army’s capabilities in confronting the militias.

During Russian President Vladimir Putin’s visit to Cairo Feb. 9, the Libyan army’s chief of staff, Maj. Gen. Abdulrazek Al Nadoori, also arrived in the Egyptian capital in an unannounced visit, in which he met with Russian officials to sign agreements for the supply of Russian weapons to the Libyan army.

Col. Ahmed al-Mismari, the spokesman for the Libyan chief of staff, told Al-Monitor, “Arming the Libyan army was a point of discussion between the Egyptian and Russian presidents in Cairo.”

Mismari emphasized the importance of Russian weapons in the Libyan army’s efforts to fight the terrorists and armed militias that now control large swaths of Libyan territory. He said, “We have had Russian arms contracts valued at tens of billions of dollars, dating back to before the revolution on Feb. 17 [2011], which, if implemented, would lead to a quick victory by the Libyan army. Since its inception, the Libyan army’s armament came from the east — from Russia — and we have the military and technical expertise to immediately begin using said armament.” He added that Russia was Libya’s best choice for weapons at this point.

Libya’s military command continues to suffer as a result of UN Security Council Resolution 1973, adopted March 17, 2011, which barred the arming or munitioning of the Libyan army and imposed many other sanctions, including a no-fly zone over Libya.

Mismari added, “We ask Security Council members to immediately vote to lift the ban on arming the military, which will have a great effect on the army’s ability to combat terrorism.” He further asked that the army be expeditiously and urgently supplied with weapons, ammunition and modern military technologies.

An Egyptian diplomatic source familiar with the recent Egyptian-Russian negotiations told Al-Monitor, “Consensus exists between the Egyptians and Russians concerning the Libyan crisis and the intervention needed to resolve the situation, by backing the civilian administration represented by the elected parliament, the transitional government of Abdullah al-Thinni and the Libyan national army.”

The source, who requested anonymity as he was not authorized to speak with the press, added, “Negotiations included discussions about possible ways to give direct Russian military support and provide weapons to the Libyan army under the international embargo, as well as urge Russia into pushing the issue forward in the Security Council.”

Since the Egyptian airstrike that targeted IS strongholds in the Libyan city of Derna at dawn on Feb. 16, following the slaughter of 21 Egyptian Copts on the Tripoli coast, the Egyptian government began a wide-ranging international effort to end the ban on arming the Libyan army and spur a rapid international response to end the Libyan crisis. Sisi commissioned his foreign minister to convey those demands to the UN General Assembly in New York.

Military and security expert Khaled Akasheh told Al-Monitor, “The problem now is not confined to who will supply the Libyan army with weapons, for everyone knows that the Russians are ready and willing to do so and expeditiously enter into military contracts. The problem now lies in breaching the UN resolution banning the armament of the Libyan army. This is the main issue not yet discussed in the Geneva talks that UN special envoy Bernardino Leon undertook with Libyan factions.”

Despite the arms embargo on Libya, a well-informed Libyan military source told Al-Monitor on condition of anonymity, “We have confirmed information about large quantities of weapons being illegally smuggled to armed militias backed by countries such as Sudan. We are prepared to submit documented information to all concerned international parties, particularly to Security Council member countries.”

Despite the political and military thrust, as well as the Cairo-led international efforts concerning the Libyan dossier, questions remain about the extent to which the international community is amenable to Egyptian-Libyan demands around fighting terrorism and forming a new international coalition to fight IS in Libya.