Libya looks to Russia for arms

Disillusioned with the West, the Libya government is exploring opportunities in Russia and says it is willing to accept limited participation by Islamists that agree to play by the rules. 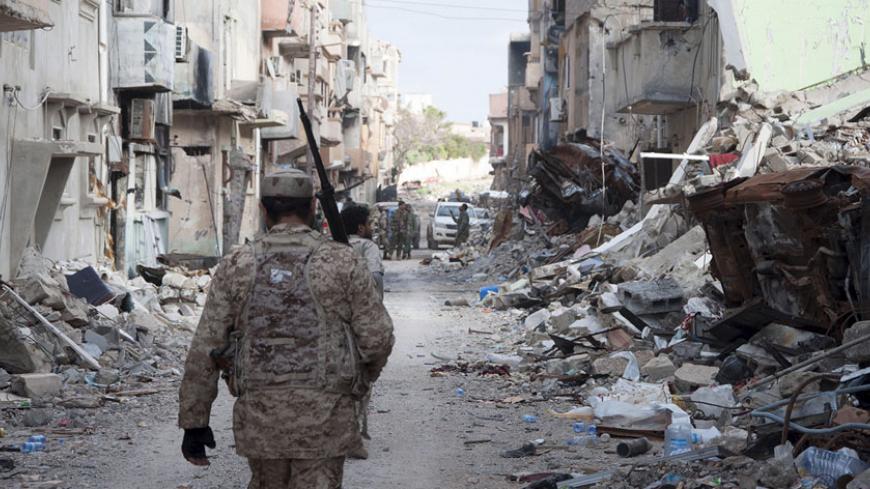 Members of Libyan pro-government forces, backed by locals, walk with weapons during clashes in the streets with the Shura Council of Libyan Revolutionaries, an alliance of former anti-Gadhafi rebels who have joined forces with the Islamist group Ansar al-Sharia, in Benghazi, April 1, 2015. - REUTERS

Libyan Prime Minister Abdullah al-Thinni has confirmed the widely held belief among Libyans that Turkey and Qatar are the main supporters of the militias in control of Tripoli since August, after overrunning the capital in a bloody 40-day war, and opposed to his internationally recognized government.

In an April 15 TV interview with RT's Arabic channel during his first visit to Moscow, Thinni said, “[C]ountries are trying to impose fanatical Islamic political views on the Libyan people.” He added, however, “Libyans do not want Islamists to dominate government,” but “welcome their participation” in the political process as long as they play by the rules. Thinni then went further, charging Qatar and Turkey with being the main weapons suppliers of the Islamist-backed militias running the Tripoli-based rebel government.

Many Libyan officials, including the army chief of staff Lt. Gen. Khalifa Hifter, as early as last June accused Ankara of arming and politically supporting the Tripoli-based militias while Doha took care of finances. Thinni also accused the West of turning its back on Libya after helping destroy it when NATO intervened in the 2011 civil war, which led to the fall of the Moammar Gadhafi regime in October that year. He said that Libyans are “disappointed by those who supported us in the beginning and let us down when we most need their help.”​

France, the United Kingdom and the United States, among other countries, have so far refused to allow the UN Security Council to lift the arms embargo imposed on Libya in Resolution 1970, passed on Feb. 26, 2011. The Tobruk-based government has repeatedly asked the United Nations to lift the embargo so it can rearm its struggling military to try to counter the increasingly more powerful Islamists, particularly in Benghazi (in the east), Sirte (in the middle of the country) and Tripoli. Jordan, currently a non-permanent member of the Security Council, along with Egypt, sponsored a draft resolution to this end, but the idea was struck down by the major powers, including the United States, arguing that the UN-sponsored mediation led by Bernardino Leon is approaching a turning point, and the two sides in Libya should therefore refrain from activities that might jeopardize the talks currently underway in Skhirat, Morocco. According to Leon, both sides have agreed to a draft agreement he described as “something that the parties can agree [on].”

In lashing out in Russia, Libya’s prime minister accused Western states of being “contradictory” in their approach to the Libyan conflict, engaging in a double standard. While they accept him and his government as Libya's legitimate representatives, they deny his administration the kind of help it needs to exercise full sovereignty and counter the increasing spread of terror organizations in Libya. In an unexpected turn, it appears that US President Barack Obama is now concerned about the role some Gulf states are playing in Libya, echoing Thinni's assessment. On April 17 Obama told the media: “In some cases, you've seen them fan the flames of military conflict, rather than try to reduce them.”

Thinni's RT appearance was the first time he had spoken out by singling out certain countries that played a central role in bringing down the Gadhafi regime, ultimately handing the country over to their own enemies, namely, extremist Islamists. NATO's eight-month air campaign destroyed much of the Libyan army, and its rebuilding is what took Thinni to Russia in search of arms and training. Moscow has so many problems on its doorstep, however, it cannot offer much assistance unless the embargo is lifted.

Thinni also traveled to Moscow in an attempt to soothe ties with Russia, which have been strained since 2011, when Russia was accused of supporting the Gadhafi regime in the civil war. Indeed, Russia did not support UN Security Council Resolution 1973, which authorized the use of force against Libya at the time. Furthermore, in December 2011 President Vladimir Putin accused the United States of involvement in the killing of Gadhafi.

The Libyan army had been equipped with Russian-made weaponry in the past, and as Thinni noted, tens of thousands of Libyan officers trained at Soviet military academies in the 1970s and 1980s. After Libya was welcomed back into the international community, the Gadhafi regime signed large military and energy sector contracts with Moscow. On his visit, Thinni sought to reactivate contracts concluded during a 2008 visit by Gadhafi to Moscow that some described as a “shopping trip.” Contracts signed then included one to build a railroad from Sirte to Benghazi and major investments in energy and infrastructure.

If Moscow decides to respond to the Libyan cry for help, it will first need to go back to the UN Security Council to pass a resolution suspending the arms embargo or completely lifting it, both of which are unlikely to happen any time soon, unless the talks in Morocco reach a conclusive agreement, another unlikely possibility despite Leon’s optimism.

Until then, Thinni must make do with what is available to his government without expecting much from the international community.