UN envoy to Libya Bernardino Leon is set to steer a new round of talks between rival factions in Libya, neither of which he reportedly considers legitimate. 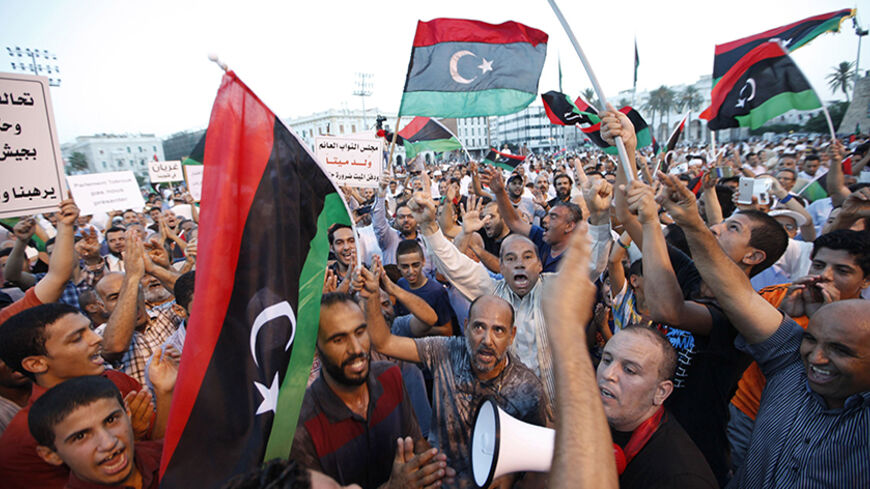 Supporters of Libya Dawn, a group of forces mainly from Misrata, demonstrate against and call for the removal of the new Libyan parliament based in the eastern city of Tobruk, at Martyrs Square in Tripoli, Sept. 19, 2014. - REUTERS/Ismail Zitouny

On Dec. 2, Bernardino Leon, the head of United Nations Support Mission in Libya (UNSMIL), announced a new round of talks between Libyan rival groups to be held in the desert oasis of Ghadames on Dec. 9. These talks will be a follow-up to last September’s, which brought together parliamentarians and their boycotting colleagues. In that initial meeting, both sides expressed their opinions on how to reconcile the country’s two rival governments and avert further bloodshed.

Since then, however, Libya has gone through many changes. The novice army backed by Gen. Khalifa Hifter appears to be gaining on the ground, at least in Benghazi. Meanwhile, the Libya Dawn leadership in Tripoli has entrenched its political position after the Supreme Court declared the elected parliament in Tobruk illegal, thus annulling it, and used Leon’s visit to Tripoli last October to further advance its claim of legitimacy.

This time around, though, Leon seems to have departed from the UN’s position of recognizing only the Tobruk-based elected parliament and its government headed by Abdullah al-Thinni. On Dec. 2, Al Arabiya reported his position as "Neither Tobruk-based authorities, which are backed by [Hifter], nor the Tripoli-based Islamist authorities can claim legitimacy."

The elected parliament has already agreed to attend the talks, but on the condition it be treated as the sole elected body representing the Libyan people. Libya Dawn, on the other hand, wants the parliament in Tobruk to accept the ruling of the Supreme Court, which decided the parliament itself was unconstitutional and should disband.

The UN and other world powers have so far only recognized the elected council of representatives based in Tobruk, but Leon appears to have the backing of major powers in his latest diplomatic push. In their joint statement issued in Brussels on Dec. 3, the foreign ministers of the United States, United Kingdom, France and others backed his mediation efforts. However, as things stand now, there are only two scenarios that could play out in Ghadames and both are risky.

The Constitutional Drafting Assembly (CDA) could be asked to act as the country’s parliament until elections can be organized and a constitution voted on. The CDA is an independently elected body with only one task — to draft the constitution — and it does not wish to play any political role other than what it was elected for. It has been working quietly in the eastern city of al-Baida and is expected to hand over its final draft by the end of the month. It has surpassed the official deadline of four months and its legality is being increasingly questioned. If it delivers the document to the General National Conference (GNC) in Tripoli, that will amount to its recognition of the GNC, despite its mandate having expired with the election of the new parliament last June. If it goes to Tobruk, it risks aggravating the GNC in Tripoli. So acting as an interim parliament could well be the best option to preserve the CDA's independence.

The risks associated with this scenario are twofold: It sends the wrong signal and it halts the transitional process. Simply put, it would mean that any party not happy with election results could easily resort to force and change the situation. The Libya Dawn movement came about last summer when its leaders, backed by Islamists, refused to accept last June’s parliamentary elections, which they badly lost. It also creates impunity, as no one is held accountable for all the killings and destruction in Libya, particularly the capital, and means that the transition process toward a stable and secure country can be prolonged as long as militant factions wish to prolong it. In the meantime, it also says that elections are not to be respected as the only democratic venue to settle political differences among factions.

The other scenario is to set up a national government based on the current status quo in the country. This would involve sharing power between the Tobruk-based elected government and its unelected Tripoli-based counterpart, which came to life after the Islamist-backed militia took over Tripoli in August 2014.

This scenario also disrupts the democratic process, as it suggests that power in the new Libya is not obtained as a result of a popular vote, and the elected parliament is nothing but a rubber stamp.

Leon’s mediation efforts appear to be more complicated now than they were several months ago. If he stands by what he has been quoted as saying about the lack of legitimacy of both sides, he is endorsing the outcome of last summer’s war that resulted in the capital falling to Islamists. This, of course, would bring into question the whole 2011 UN-approved NATO intervention in Libya. One should remember that the declared aim then was the protection of civilians and democracy for Libyans. Reneging on the elected parliament means renegading on the whole Libya project.

Should Ghadames II take place and proceed toward a political solution, its outcome would need to be skillfully sold to the Libyan people, who are already frustrated and have little trust in their political elite, let alone elections.