Hope for Libya after first round of talks

After months of painful lobbying, the UN’s special envoy to Libya, Bernardino Leon, managed to get opposing sides to the negotiating table, with Libya’s main warring factions declaring a cease-fire to give the talks a chance. 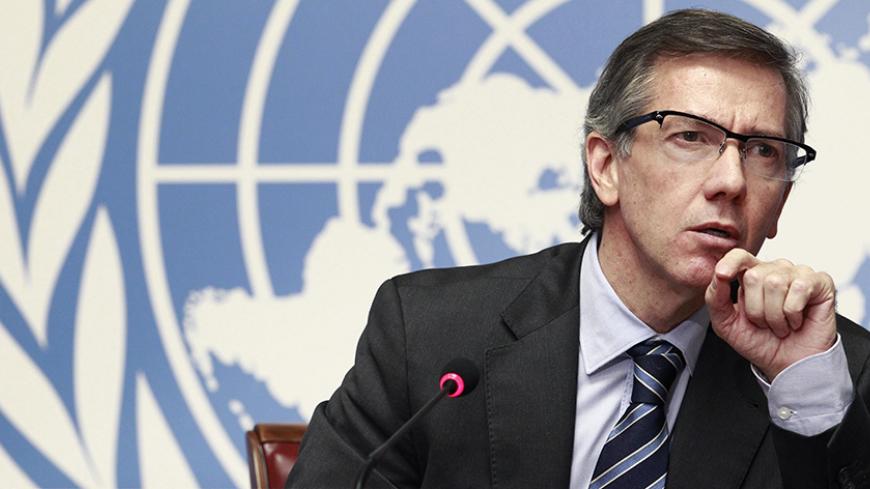 With the strong backing of the United Nations and the European Union, finally, UN special envoy to Libya Bernardino Leon’s mediation in the Libyan crisis has borne some fruit.

Leon succeeded in bringing the rival bickering Libyan factions together in Geneva for two-day talks Jan. 14-15 to agree on an agenda for further talks that will resume this week, according to a statement by the United Nations Support Mission in Libya (UNSMIL). The intense negotiations produced negotiable points for further discussions, which were a positive sign of progress given the violence Libya has suffered since last summer.

The most important point on the agenda was the agreed cease-fire to go into immediate effect. In what appeared to be a show of good faith, Libya Dawn militias were quick to announce suspension of hostilities on all fronts as of Jan. 15 on the condition that the Tobruk-based government does the same, according to a statement delivered to local media by their spokesman Ahmed Hadia.

It was not long before the Libyan army announced its own cease-fire effective midnight Jan. 18. However, in a statement published on Jan. 17, the army retained its right to continue targeting “terrorists who deny Libyans their right in building a national democratic state,” a clear reference to jihadists in eastern Libya, namely Ansar al-Sharia and the Benghazi Revolutionaries’ Shura Council, who have been fighting the army since last summer. In practical terms, the army’s cease-fire means a suspension of hostilities around the oil crescent in central Libya, east of Sirte, and on front lines in the Nafusa mountains close to the Libyan-Tunisian border. It will also halt airstrikes against the western city of Misrata, the backbone of the Libya Dawn militias.

The statement also made it clear that it will continue its reconnaissance missions on front lines to prevent any changes on the ground through the supply of arms or transfer of more fighters by Libya Dawn militias.

Notably, neither the Libya Dawn leadership nor the Tripoli-based General National Congress (GNC) attended the first round of talks in Geneva. However, they were indirectly represented through others such as Fathi Basha Agha and Na’am al-Gharini. Both are members of the Tobruk-based parliament, but they are among the dozen members who boycotted it, choosing instead to support Libya Dawn. However, on Jan. 18, GNC spokesman Omar Hmeidan said the GNC is willing to take part in the next round of talks provided it takes place inside the country.

There are two reasons behind this change of heart. One, the visit to Turkey on Jan. 16 by GNC Chairman Nuri Abu Sahmain, where he met Turkish President Recep Tayyip Erdogan, who advised him that the GNC should join the UN-brokered talks. Two, Agha, a boycotting member of the Tobruk-based parliament and a prominent leader from Misrata, was in Geneva last week and appeared to be in a more reconciliatory mood.

It was more than likely that Turkey played a role in persuading the Libya Dawn militias to accept a truce as well, in an attempt to save face and capitalize on the talks, which implicitly means some sort of recognition by the United Nations. The GNC’s mandate expired when the new parliament was elected June 25, 2014, thus it is not recognized by any country as a legitimate political body. It was revived last summer by the Libya Dawn militias who took control of the capital in August 2014. Participating in any UN-brokered talks is a step toward accepting it as a legitimate party in the talks.

International pressure also appears to have paid off, at least in making it clear that the UN Security Council and the European Union are backing Leon’s mediation efforts. French President Francois Hollande called on the “international community to take its responsibility" on Jan. 5 while the EU warned that the Geneva talks could well be the “last chance” for Libyans to find a solution to the crisis that has been gripping the country since 2011. The Security Council, for its part, was quick to back Leon in a Jan. 17 statement, in which it welcomed the cease-fire and stressed its willingness to use sanctions against those who obstruct peace in the country.

The second round of talks has an ambitious agenda, which appears to be inclusive, and directly related to the majority of Libyans. It calls for addressing important issues including illegal detainees, illegal jails, abducted individuals, return of refugees and the forcibly displaced.

It remains to be seen if the talks will take place or not. While it is not expected that the talks will succeed in tackling complicated issues, such as return of refugees and freeing of illegal detainees, that such issues are on the agenda means there is recognition of the need to address them.

Despite many reservations on the way the talks are conducted and who was invited, they represent the first glimpse of hope for the majority of Libyans that there could be light at the end of the tunnel.

If the next round of talks succeeds in settling at least some of those issues, it might give the Libyans something to cheer about at the fourth anniversary of the so-called revolution on Feb. 17.