The Turkish government denies that it is taking sides in Libya, between the governments in Tobruk and Tripoli. 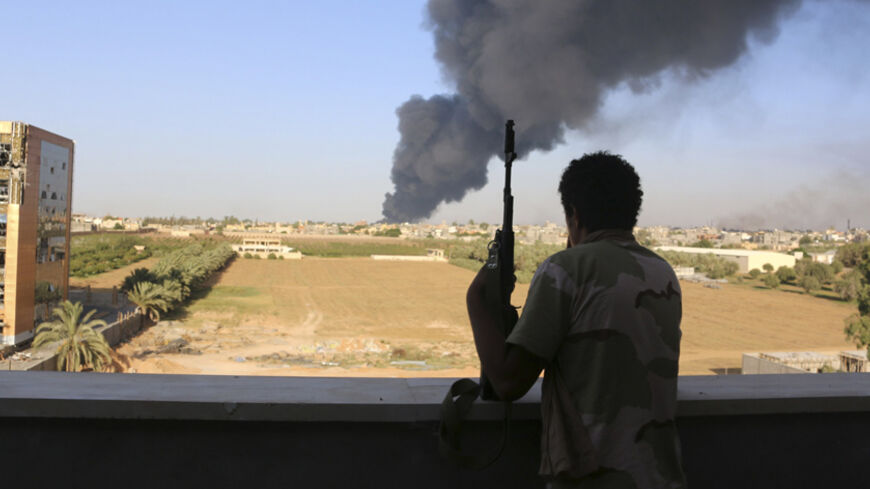 A fighter watches as smoke rises after rockets fired by one of Libya's militias struck and ignited a fuel tank in Tripoli, Aug. 2, 2014. - REUTERS/Hani Amara

Turkey had initially opposed NATO's intervention in the uprising against Moammar Gadhafi's regime in Libya to prevent France from playing a prominent role. But within a month, Turkey gave NATO the green light and allowed Izmir to become the command center of the NATO operation. Now, Ankara is griping about foreign intervention in Libya. Of course, this attitude is not prompted by the foreign policy principle of maintaining neutrality. On the contrary, Turkey has not abandoned its policies that are dragging it into a war of proxies because of its backing of the Muslim Brotherhood. On one side Egypt, Saudi Arabia and the United Arab Emirates have joined forces to squash the Muslim Brotherhood and on the other side are Turkey and Qatar. Sudan has joined the Qatar-Turkey bloc by playing a role in Qatari weapons shipments to Libyan Dawn, a superstructure of militia forces dominating Tripoli.

The Justice and Development Party (AKP) government in Ankara categorically rejects accusations that it is taking sides in Libya and working only with the Muslim Brotherhood. But Ankara’s reading of the political developments in Libya and its views about the parties there immediately brings Ankara to one side. For one thing, the AKP government is not hiding its support for the Tripoli-based General National Congress (GNC) and the Omar al-Hassi government — which is not recognized by the international community — against the House of Representatives and the government of Abdullah al-Thinni.

When "Operation Dignity" led by retired Gen. Khalifa Hifter, who represents the military front of the House of Representatives and the Thinni government, bombed on Nov. 24-25 Tripoli's Mitiga International Airport under the control of rival militias, Turkey's Foreign Ministry commented: "We strongly condemn the airstrikes. The crisis in Libya can be resolved only by ceasing foreign interventions, reaching a cease-fire and a comprehensive political dialogue.”

The language used by the government-controlled media in Turkey, including the national news agency Anadolu, sheds light on how one side is favored. The government media has persistently referred to Hifter, who has declared war on Islamic organizations in Tripoli that control Benghazi and against the Muslim Brotherhood and the GNC that is supported by militias from Misrata, as a “putschist” or “coup-plotting general.” To understand the position of the AKP government it suffices to follow reporting by the semi-official Anadolu news agency.

In October, when Hifter declared Turks in Libya as "unwanted persons," and even took some of them hostage, there was an interesting diplomatic demarche from Ankara. Emrullah Isler, the special envoy of Turkish President Recep Tayyip Erdogan, went to Libya and met with various parties, first in Tobruk and then in Tripoli.

Government sources cited this move as a demonstration of Turkey’s neutrality. But the answer by the "Hassi government" when asked which is the legitimate government in Libya is clear, especially after the decision of Libya's Constitutional Court that found the June 25 elections illegal and invalid.

A government source in Ankara, who did not want to be identified, told Al-Monitor: “There is an ongoing perception that shows Turkey as backing radical groups. Turkey doesn’t take sides in Libya. We meet with all parties. When Emrullah Isler went to Libya as special envoy of President Erdogan he first met in Tobruk with Thinni and then with the Hassi government in Tripoli. He offered assistance to end their political rifts. Thinni asked Turkish Airlines to fly to Tobruk. When reminded that Turks have been declared 'unwanted persons,' Thinni said that was an unacceptable attitude and called Hifter to end his hostile attitude against Turkey. If Turkey had taken sides or ended dialogue with one of the parties, then the nine Turkish hostages would not have been released.”

True, Turkey had engaged Thinni in a dialogue in Tobruk, but meanwhile Isler became the first high-level foreign guest ever hosted by the Hassi government. Turkish envoy Isler labeled the contacts of UN special envoy Bernardino Leon in Tripoli — in the aftermath of the Constitutional Court ruling that annulled the elections — as "coming closer to Turkey’s position," overlooking Leon’s comment “We will study the ruling” and his addressing Thinni as prime minister. Because of his position Leon has to meet with both sides.

Ankara, which had first agreed Thinni to dispatch a charge d’affaires from Tobruk to Turkey, reversed its decision after the ruling of the Constitutional Court. A Turkish government official told Al-Monitor on condition of anonymity when asked whether Turkey recognizes the Tobruk government (recognized by the UN) or the Tripoli government, “The Constitutional Court abrogated the assembly in Tobruk. That decision determines who is legitimate.”

Although Erdogan’s tough stance that convening of the House of Representatives elected on June 25 in Tobruk instead of Tripoli is unacceptable and was promoted as a Turkish warning against a division of Libya, it did place Turkey clearly on one side of the argument. While even the UN is cautiously engaged in the debate on the Constitutional Court ruling and the debate on legitimacy, Ankara's taking a position of supporting one side’s claim is narrowing the diplomatic maneuvering room of Turkey.