The shift follows a heavy push by Egypt and Jordan after the Islamic State beheading of Coptic Christians. 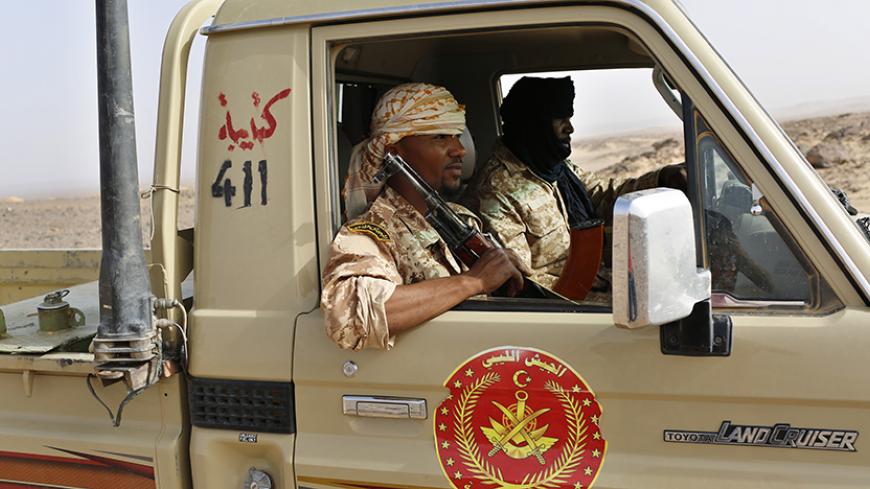 A Libyan army vehicle patrols on a desert road between Libya and Algeria, May 29, 2014. - REUTERS/Ahmed Jadallah

Some US lawmakers are starting to question the United Nations weapons ban on Libya following a lobbying blitz by regional powers after the Islamic State (IS) announced last week it had beheaded 21 Egyptian Coptic Christians.

Jordan, which saw one of its pilots burned alive by the Islamist group, began circulating a draft resolution at the UN Security Council on Feb. 18. Libya and Egypt immediately jumped on board and have since both pressed their case on Fox News, whose viewership consists largely of politically active conservative Americans.

"It is time to rethink the UN's arms ban, and it's time to come up with a comprehensive approach," the powerful chairman of the Senate foreign aid panel, Lindsey Graham, R-S.C., told Al-Monitor on Feb. 24. "We're going to have to take some risks and make some bets here, because without a dynamic change on the ground Libya's going to be the new Syria."

"This is typical of what's happened so many times in the past: Rather than try and determine who the good guys are — meaning the friends of the United States — we end up just having an arms embargo against everybody, so only the bad guys get re-armed," Rohrabacher told Al-Monitor. "It's a flaw in our system that needs to be corrected."

The comments follow increasing criticism that the United States and other Western powers aren't doing enough to confront a growing IS presence in Libya. The country is split between an internationally recognized parliament and government in the east and a rival, Islamist-dominated government based in the capital, Tripoli.

​"Unfortunately, the international community and especially the United States, Britain and the European Union have refused to arm the Libyan army," the leader of the country's Western-backed government, Prime Minister Abdullah al-Thinni, told Al-Arabiya on Feb. 24. "Libya Dawn is part of militant Islamists which get weapons, ammunition and supplies from all over the world. But America and Britain have other ideas against the interest of the Libyan people."

Obama administration officials argue that lifting the ban, which dates back to the uprising against strongman Moammar Gadhafi, would imperil any chance of a reconciliation between the rival governments. They add that the Libyan army is in any case already eligible for weapons, but must simply first go through a committee created by the 2011 resolution.

"The sanctions measures currently in place do not prohibit the Government of Libya from procuring arms," State Department spokeswoman Jen Psaki said last week. "They merely require a sanctions committee approval for lethal items. Given the instability on the ground, this exemption request provides a measure of oversight to ensure arms are safely and securely delivered to their intended users in Libya."

The Libyan government and its allies disagree, arguing that any extra hurdles make it harder to confront IS.

“The most important thing right now is to lift the arms embargo on Libya so that the national army has the means to battle [IS]," Libyan ambassador to the UN Ibrahim Dabbashi told Fox last week after video of the beheadings became public.

Egypt's ambassador to the United States, Mohamed Tawfik, joined the chorus over the weekend. Cairo bombed IS strongholds in Libya with Thinni's blessing last week, but has called for an international campaign inside Libya.

"In Libya, there is a legitimate government, and that government is denied the weapons it needs to confront terrorists,” he told Fox News. "If you start early on, it is easy to control [IS]. If you wait until it is too late, until they have roots deeply in place, until they have training camps, until they control a large part of the country, then it’s already too late.”

Some experts, however, say the IS threat is being used to scare the international community into getting behind Libyan forces that are not only opposed to the radical group, but are also determined to take back Tripoli from Libya Dawn's more moderate Islamists by force. Karim Mezran, a Libyan-Italian senior fellow with the Atlantic Council's Rafik Hariri Center for the Middle East, said lifting the ban would further sideline those Libyans who want a negotiated settlement with Islamic Dawn.

"It decreases the incentive to negotiate," Mezran told Al-Monitor. He said the idea of lumping together all Islamists into a "big octopus" was a myth being pushed by people like Gen. Khalifa Hifter, the head of a military campaign against Libyan Islamists of all stripes.

Some Libyan officials have made it clear they have no intention of pursuing talks with Libya Dawn. In a swing through Washington earlier this month, the country's ambassador to the United Arab Emirates called Libya Dawn a "bunch of thugs."

"Muslim Brotherhood-associated lobbyists have been pushing this line of ‘two governments that have to discuss things with each other,'" Aref Ali Nayed told Al-Monitor. "That’s a huge mistake and a betrayal of the values of democracy."

In any event, the time for a negotiated settlement may well have passed. The Western-backed parliament suspended its participation in talks on Feb. 23, and on Feb. 24 voted to create a new army chief post for Hifter.

"The big debate now," Mezran said, "is does parliament control Hifter — or does Hifter control parliament?"