Libyan diplomat Aref Ali Nayed urges Washington to step up its involvement in the country. 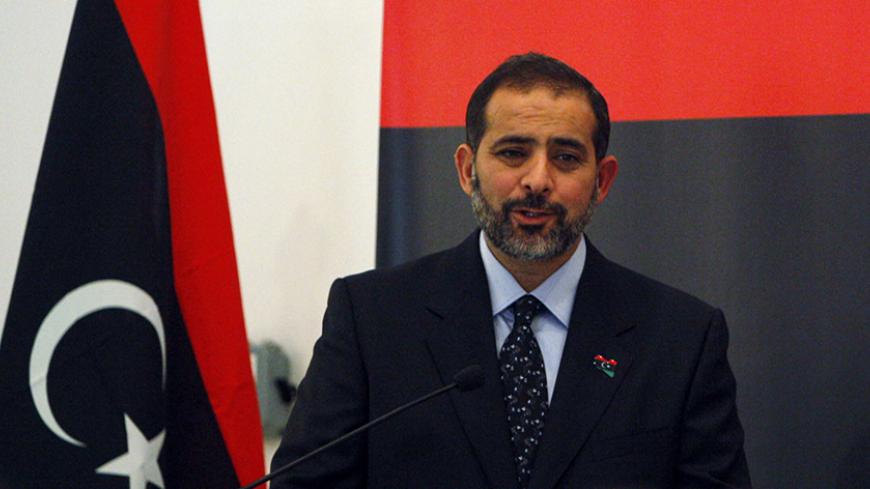 One of Libya’s senior diplomats is in Washington this week on a lonely mission to drag the US back into the Libyan fray.

Aref Ali Nayed, the Bayda-based government’s ambassador to the UAE, says the Islamic State (IS), or ISIS, risks taking over Libya and turning it into a global terrorism base. He wants help kicking IS militants out — along with the rival Libyan Dawn government in Tripoli that he says made their rise possible.

“What I think many people don’t know is how much [IS] has infiltrated Libya [and turned it] into its ATM machine, gas station and airport from which it can basically attack any European target,” Nayed said in an interview at Al-Monitor’s Washington office. “It’s the most important risk to the security of the region, be it to our Arab neighbors, our African neighbors or our European neighbors across the Mediterranean.”

An Islamic scholar and longtime foe of the Muslim Brotherhood-affiliated Islamists who have taken over the western part of the country, Nayed is officially in Washington to update the US Institute of Peace on its 15-month-old partnership with the Libya Institute for Advanced Studies, an educational program he chairs. Among its efforts is a groundbreaking compendium of Islamic State incidents — kidnappings, executions, etc. — in Libya since July.

As Congress prepares to debate a new war authorization against Islamic State, Nayed plans to share those findings with key members of both parties and urge them not to forget about Libya. He points out that the democratically elected and internationally recognized parliament in Tobruk last week announced its desire to be part of the international coalition against Islamic State, and would welcome US help.

“There is no reason to treat Libya as an isolated case, especially when it is the most important country when it comes to resources,” Nayed said. “You cannot fight [IS] effectively in Iraq or Syria without including Libya, because of the flow of arms, fighters and money. It is a network, and a network of darkness needs a network of light to fight it. You cannot fight networks by simply focusing on certain nodes; it’s like trying to eliminate cancer from a body by treating one tumor.”

The embattled government is seeking help with humanitarian assistance, as well as technical coordination with NATO, Africom and regional forces on counter-terrorism, border control and trafficking of arms and fighters, Nayed said. The Bayda-based government doesn’t want US boots on the ground, but may welcome air strikes such as those targeting Islamic State fighters in Syria and Iraq.

Just as important, he said, the international community needs to put its support behind Libyan government entities that it has formally recognized, such as the Central Bank, the National Oil Company and the Libyan Investment Authority.

“Ambiguity about who’s in control of Libyan assets is a very destructive thing — it leads to the misuse of these assets and continued looting for the use of terrorism,” Nayed said. “We need to act on actually supporting these entities. For example, it’s ludicrous that the Libyan army still cannot import the equipment it needs because of UN sanctions.”

The Obama administration and Congress soured on Libya after the civil strife that followed the fall of strongman Moammar Gadhafi. Relations further deteriorated after the attack that killed US Ambassador Christopher Stevens in 2012, but Nayed said the previous government’s seeming reluctance to help catch and punish those responsible argues in favor of getting involved now.

“The problem is the infiltration of extremists,” Nayed said. “The reason the Libyan state did not cooperate with the USA in capturing the killers of my friend Chris Stevens is precisely because that government was infiltrated. How can you expect them to help you when the extremists control the nodes of the state?”

Nayed went on to argue that Washington has fallen for a two-pronged narrative about Libya: That the situation is hopeless, and that the two rival factions in Tripoli and Bayda just need to agree to share the spoils. He’s here to tell them that’s bunk.

“Muslim Brotherhood-associated lobbyists have been pushing this line of ‘two governments that have to discuss things with each other.’ That’s a huge mistake and a betrayal of the values of democracy,” Nayed said. “The guys in Tripoli are basically a bunch of thugs. They’re not partners in the fight against terrorism; they are precisely part of the problem. They are incubating terrorism and using the democratic system to further their ends.”

He said he welcomes the UN-sponsored peace talks that are set to start inside Libya within the next few days. But he cautioned that a unity government “cannot be inclusive of exclusivists or Trojans who are trying to sabotage the Libyan state.”

“That process must not be a process of letting Trojans back into the system whereby they can control the nodes of the state,” Nayed said.

Asked if last week’s attack against the Corinthia Hotel, which has been claimed by the Islamic State’s Tripoli branch, could bring the two governments closer together, Nayed scoffed. The hotel serves as residence to Libyan Dawn Prime Minister Omar al-Hassi, who appears to have been the target of the attack.

“Part of the reason [IS] is rising in Libya is because Islamists have been able to control nodes of the Libyan state for the past four years by having key positions in the Defense Ministry, the Interior Ministry, the Central Bank, the Auditor General, the intelligence service,” he said. “They’ve been able to further their interests and to use Libyan funds.”

Tripoli officials have taken a similar stand, placing the blame for the attack on Gen. Khalifa Hifter, the military commander of the eastern forces trying to dislodge Libyan Dawn.

“We have seen initial reports on Facebook and social media from some sites that they are saying they are from [IS] and are claiming the attack. Following up with our own intelligence services, we have seen that these social media are not authentic sources,” Hassi told the Bloomberg news service. “We do believe this action was taken by the Hifter government with the possible aid of Egyptian intelligence, in an operation to try to show that there is instability in the capital, where we have provided stability for the residents, and to give the impression that terrorist organizations are able to operate in Tripoli.”

Such accusations of political shenanigans are rife in Libya, and Nayed himself has been accused of using his diplomatic office to get the UAE to arrest several Libyan political rivals. He says the stories were planted by Muslim Brotherhood operatives that he’s been battling since working with the National Transitional Council during the uprising against Gadhafi in 2011, and points out that he's even helped get the UAE to release three of the arrested Libyans.

“I have no illusions: I am under attack by the Muslim Brotherhood,” he said. “But at the same time I am neither afraid of that attack, nor does it dissuade me from supporting Libyan citizens even if they belong to the Muslim Brotherhood. I still deliver their consular rights, and I dare anyone or challenge anyone to prove otherwise.”