Egyptian authorities have implemented new measures to restrict the entry of foreigners and to prevent Egyptians from traveling to politically unfriendly countries like Qatar and Turkey. 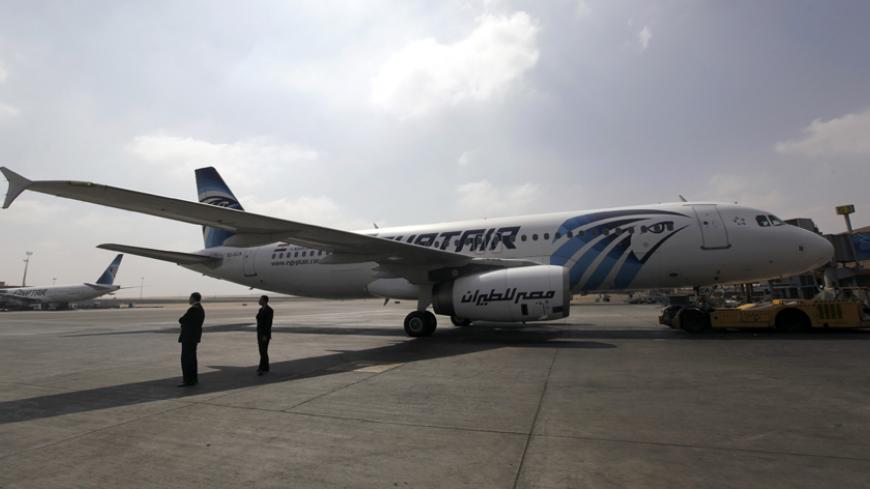 Airport staff stand next to an EgyptAir plane on the runway at Cairo airport, Sept. 5, 2013. - REUTERS/Mohamed Abd El Ghany

CAIRO — Egyptian authorities are increasingly denying foreign human rights activists entry to the country. Cairo has created security watch lists of undeclared visits of figures who oppose the Egyptian regime. Most recently, on Dec. 13, 2014, entry was denied at the Cairo airport to Michele Dunne, a senior associate at the Carnegie Endowment for International Peace, who was set to attend a conference. On Aug. 4, 2013, Egyptian authorities denied entry to Yemeni activist Tawakkol Karman.

Egyptian travelers also complained of being unable to travel to Turkey without prior authorization from Egyptian security authorities. In addition, Cairo imposed new measures to restrict residents from traveling to ​Qatar, Iraq, Libya and Syria.

The Egyptian Interior Ministry said this last set of restrictions are limited to countries where war has broken out, such as Syria and Iraq. The ministry added Turkey to the list as a way to limit the recruitment of Egyptians into extremist groups. Furthermore, Egypt wants to prevent members of the Islamic State (IS) and Jabhat al-Nusra from entering the country, so Cairo’s airport is thoroughly examining the papers of travelers coming from these countries.

However, Egyptian officials failed to explain why stable Qatar had been added to the list. It is well known that Qatar and Turkey oppose the current Egyptian regime and see its rise to power as the result of a coup. The two countries also support the Muslim Brotherhood, which Cairo declared a terrorist group, holding it responsible for the violence that occurred after the ousting of President Mohammed Morsi.

A source from EgyptAir told Al-Monitor that four flights depart Cairo daily for Istanbul (two EgyptAir flights and two from Turkey-based airlines). On condition of anonymity, the source said, “Indeed, airport security stops and investigates Egyptian passengers between the ages of 20 and 40. They do not allow them to board unless they have prior authorization provided by Cairo’s security authorities, represented by the Interior Ministry.”

The source said, “These procedures are new to the Istanbul flights, while they were already applied for flights to war-torn countries such as Iraq and Libya. However, they have not yet been applied to the Qatar flights, where airport security only goes over the previously existing travel-ban lists.”

Egypt’s decision to restrict travel to Turkey creates a major issue for Egyptian tourism companies, as 375,000 Egyptian tourists travel to Turkey annually. Turkey is considered a cheap and nearby destination for Egyptians. The Egyptian Tourism Federation said the ministry's decision mixed politics with tourism. Ali al-Manesterly, a member of the federation, said that the new measures target an age group that represents 70% of Egypt's travelers to Turkey, most of whom are families or traders. The measure negatively impacted 150 Egyptian tourism companies that organize flights to Turkey. Manesterly warned that Turkish authorities might take reciprocal measures, noting, “Turkish tourism companies handle the majority of tourists coming from Europe to visit Sharm el-Sheikh and Hurghada in Egypt.”

Asked whether Egypt's new measures comply with the principles of international relations, Said al-Lawandi, an expert in international relations at Al-Ahram Center for Political and Strategic Studies, told Al-Monitor, “The Egyptian regime led by President Abdel Fattah al-Sisi does not operate randomly. The Egyptian constitution stipulates that the country, represented by the government, is responsible for providing safety and security, as well as impeding all internal or external elements that attempt to harm the country’s security.”

Lawandi said that the Egyptian decision is the result of Libya, Iraq and Syria being unstable. Regarding Qatar and Turkey, Lawandi said, "The situation between Egypt and Qatar is currently taking a different course. A new agreement is expected to allow Qataris to come to Egypt in order to revive tourism and create new projects. Egyptian travel will be allowed again after reaching a reconciliation between both countries, sponsored by the Saudi king."

He added, “However, Turkey remains one of the countries that creates concerns for Egyptian national security. It interferes in internal Egyptian affairs and tends to support the terrorist Brotherhood that wanted to take over Egypt. Egyptians do not complain about such a decision as long as it’s for the protection of national security.”

Lawandi said that denying foreign figures like Karman and Dunne entry did not come out of nowhere. The Egyptian security apparatus, he said, often has access to information that has not been made public and takes strict measures accordingly.

Cairo’s concerns about the IS threat expanding to Egypt and the rising number of Egyptians joining the group are legitimate reasons to restrict Egyptian travel. However, Egypt's selective exclusion of certain rights activists is more ambiguous.