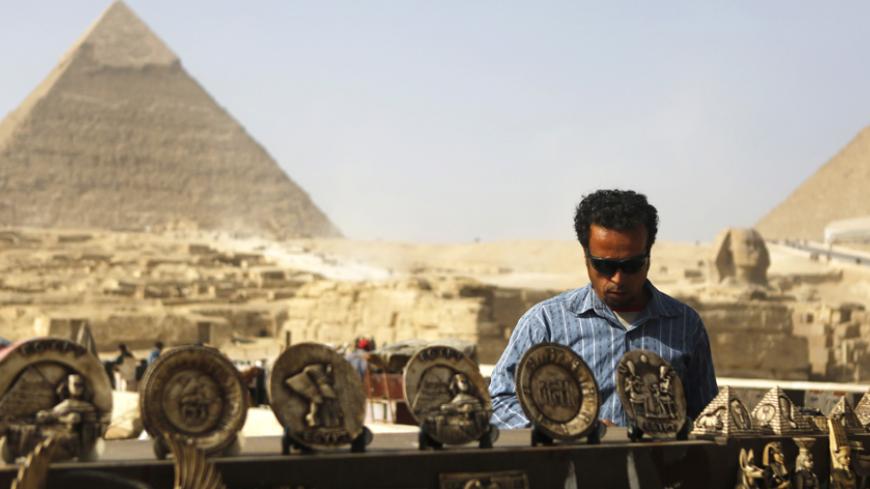 A souvenir vendor waits for tourists in front of the Sphinx and the Pyramids of Giza on the outskirts of Cairo, Dec. 9, 2014. - REUTERS/Amr Abdallah Dalsh

Egypt needs to "revitalize its tourism sector," said Amr Sedky, deputy chairman of the tourism chamber’s board of directors. The sector was disrupted following the "January 25 Revolution of 2011, the subsequent strikes that plagued the country and after many countries imposed travel bans on Egypt."

Sedky’s statement came in response to a March 17 decision by the Ministry of Foreign Affairs requiring tourists to obtain visas prior to their arrival in Egypt. As of May 15, tourist visas will no longer be issued at Egyptian ports of entry. Egypt will only grant visas to tour groups organized by national tourism agencies.

Many workers in Egypt's tourist sector opposed the decision, which was passed along to Egypt's embassies.

Sedky said that individual tourism would possibly recover after a March 13 economic conference that hoped to attract investment to Egypt. "Egyptian cities will witness a high level of business tourists," he said. "These [tourists] usually come individually, not in groups, and they often decide to visit Egypt at the last minute without prior preparation. Preventing [these tourists] from obtaining a visa at Egyptian airports will delay their visits and maybe discourage them from ever visiting, given the large number of procedures that are required to extract visas with consulates abroad."

He added, “Owners of tourist agencies were not consulted. [These individuals] have experience in the field and can provide suggestions to officials before making a decision.”

Salah al-Niyyal, head of Sako Tours, told Al-Monitor, “The decision will adversely affect Arab tourists, especially citizens of the Arab Gulf states, who do not come in tourist groups and usually go to the Egyptian airports to buy a visa for $25.”

“While neighboring countries such as Turkey issued measures to facilitate the entry of tourists, Egypt issued decisions to complicate such procedures and still projects to attract 20 million tourists by 2020,” Niyyal said.

Official Egyptian statistics show that the percentage of tourists who travel in official groups did not exceed 20% in 2014, while the proportion of European tourist groups fluctuated between 73% and 75%. The same statistics show a decline in tourism after the January 25 Revolution. In 2010, Arab tourists totaled 2 million and then fell in 2014 to 1.6 million, while the number of Europeans exceeded 11 million in 2010 and dropped to 7.5 million in 2014.

Official figures on tourists not traveling in groups are oftentimes conflicting. Adlah Ragab, economic adviser to the minister of tourism, stated that individual tourism accounted for 17% of overall tourism in 2014, and that Arabs represented 65% of the individual tourists. Yet, Tourism Ministry spokeswoman Rasha al-Azayzi told Al-Monitor that Arab and non-Arab tourists did not exceed 10% in 2014.

Foreign Ministry spokesman Badr Abdel Ati told Al-Monitor that the visa decision stems from "security concerns to protect [Egypt] from foreign countries. In light of the difficult security conditions plaguing Egypt, there are concerns over the entry of individuals with unknown motives and their probable involvement in sabotage acts."

Abdel Ati pointed out that by having tourists register with tourist agencies, the Egyptian Tourist Authority will be able to keep track of tourists' details, such as their country of origin, their occupation, the length of their trip and the places they will visit. Since outings are normally scheduled and planned by the tourist agency, whenever someone does not arrive for a scheduled tour, the company can report the case to authorities who can then take the necessary actions and investigate their whereabouts.

Abdel Ati said that the decision — which was reached following consultations with the ministries of tourism and interior — is final because national security is a top priority.

Asked about the consequences of such a decision on tourism, he said, “We'll see how it goes once the decision is applied.”

Azayzi denied that Tourism Minister Khaled Rami objected to the decision, and said that it was agreed upon following discussions with the Ministry of Tourism. She believes that the decision will have little effect on the number of arrivals to Egypt, as 90% of tourists come as official groups.

She noted that Egyptian consular authorities in the Gulf states will work promptly and swiftly to facilitate the visa procedures for Arab tourists, as most of them arrive in Egypt independently, not with tourist agencies.