Why are Sylvester Stallone, Salma Hayek, Will Smith visiting Egypt?

Egypt’s Tourism Ministry is investing in a “tourism of stars” to try to revive the tourism sector by bringing A-list celebrities to the country. 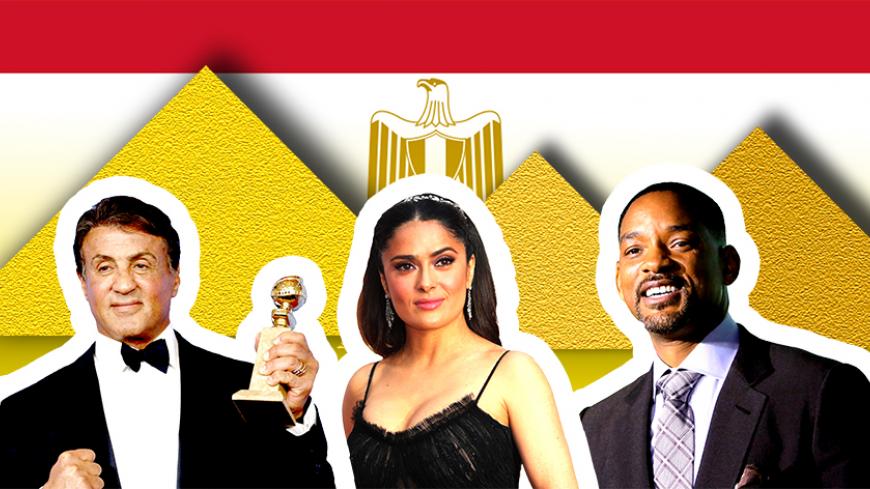 CAIRO — The Egyptian Tourism Ministry announced March 31 that Hollywood actor Sylvester Stallone would visit Egypt in April with his family. The ministry said that there were ongoing negotiations with international star Salma Hayek to also visit Cairo in April and that the visit would be promoted to attract the greatest possible number of tourists.

In March, Hollywood star Will Smith and his family visited Egypt for two days during which he visited the pyramids with former Antiquities Minister Zahi Hawass and also toured the Egyptian Museum, where he took photos with his family.

The Antiquities Ministry said on its official Facebook page that the visit was aimed at “supporting Egyptian tourism and promoting Egyptian archaeological areas.”

On Feb. 21, global soccer great Lionel Messi made a short visit to Egypt that lasted for a couple of hours in support of Egypt's medical tourism campaign for international hepatitis C patients. Messi visited the pyramids before attending a dinner held to launch the campaign. He then left Cairo in his private jet.

Ahmed Shukri, the head of the International Tourism Department at the Tourism Ministry, told El-Watan News on Feb. 21 that the visit “is the greatest message to the world that Egypt is a safe destination. It is also a free advertisement for the archaeological aspect of tourism. The Tourism Ministry’s offices abroad will exploit this visit for promotional purposes.”

The Tourism Ministry is taking advantage of the international popularity of these stars to support Egyptian tourism, especially since the sector has been suffering from a sharp decline in revenues since the January 25 Revolution in 2011. In 2010, revenues amounted to $12.5 billion, but they fell to about $3.4 billion in 2016, a drop of almost 73%.

Walid al-Batouti, an adviser to Tourism Minister Yahya Rashid, told Al-Monitor, “The Tourism Ministry has an undeclared plan to attract a large number of international stars in various fields to support Egyptian tourism, and the coming period will witness visits by A-list international stars. However, their names will not be revealed because we do not want to invade their privacy and because something might come up and prevent them from coming at the scheduled dates and some people might start promoting unrealistic reasons as being behind the calling off or postponement of the visits, and this negatively affects Egyptian tourism.”

Batouti said, “The recent visit of Will Smith had a great impact on tourism in Egypt, especially as he posted pictures of the visit on his official Facebook page, which is followed by millions around the world. Following his visit, a large number of international tourism companies contacted the ministry to coordinate visits of large tourist delegations to Egypt.”

Batouti added, “The Tourism Ministry is trying to capitalize on these visits to push the tourism sector forward, especially considering that tourism activity went well during the beginning of this year compared with previous years.”

Saif Ammari, a tourism expert and former treasurer of the Egyptian Tourism Federation, told Al-Monitor, “The international stars’ visits to Egypt positively affect the country’s global reputation and serve as an important attraction for the tourism activity, especially if these visits are capitalized on. But it is important to stress that breathing new life into the tourism sector requires several combined factors, including a better political, economic and security climate and a media promotion of the visits carried out by stars.”

Member of parliament Mohammed Abdelmaksoud, the undersecretary of parliament’s Tourism Committee, told Al-Monitor, “Social media has become very important as far as attracting tourists is concerned. Media outlets show a positive image of the state, and global stars are followed by millions around the world. So they positively impact tourism in Egypt when they post pictures of their visit to Egypt on their personal accounts.”

He added that the parliament supports the efforts of the Tourism Ministry in this regard, and the Tourism Committee is doing everything it can in order for Egyptian tourism to return to its pre-revolution level. The committee is trying to overcome any obstacles that may hinder tourism. The case in point is that it rejected the Tourism Ministry's February decision to increase visa fees to Egypt from $25 to $60 given the negative impact this would have on tourism activity. The decision was reversed after the Cabinet agreed March 21 to keep visa fees at just $25.”

The “tourism of stars” is a significant tool that the Tourism Ministry is trying to take advantage of as part of its undeclared strategy to attract as many global stars as possible to Egypt. All of these factors bode relatively well for Egyptian tourism in 2017.