The Egyptian Ministry of Tourism is seeking to attract 20 million tourists by 2020 following setbacks in the sector due to security and political instability. 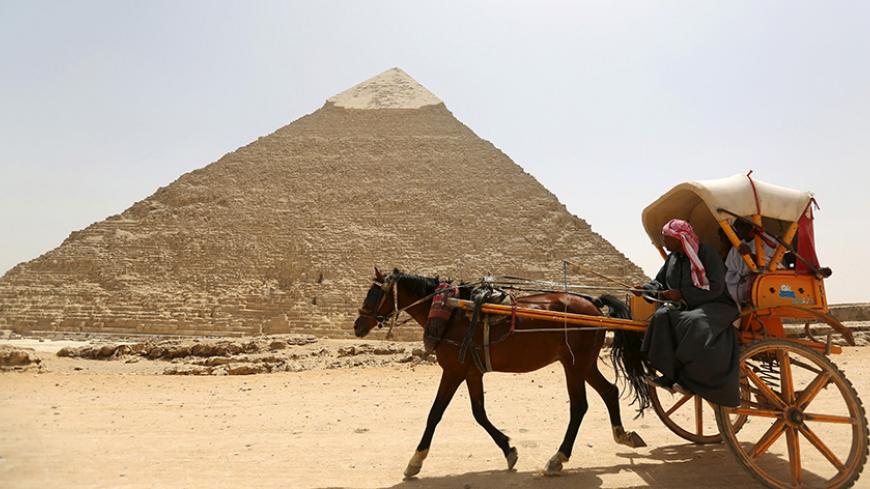 Arab tourists ride a horse cart at the Giza pyramid on the outskirts of Cairo, April 27, 2015. - REUTERS/Mohamed Abd El Ghany

CAIRO — The Egyptian Ministry of Tourism is drafting an ambitious plan to attract 20 million tourists by 2020 and to boost the sector's total revenues to $26 billion.

Minister of Tourism Khaled Rami believes this goal can be achieved through a new international advertising campaign that is set to begin in December 2015. The campaign will focus on the diversity of tourism in Egypt, in particular Nile tourism, as well as desert outings, sports, therapeutic retreats and religious tourism.

Elhamy el-Zayat, chairman of the Egyptian Federation of Chambers of Tourism, told Al-Monitor, “It is possible to achieve the goal of 20 million tourists, but reaching the estimated revenues of $26 billion is difficult in light of the prices at which the Egyptian tourism product is offered.”

Cultural tourism was strongly affected following the January 25 Revolution, as many countries such as Japan, China, India and Spain warned their citizens about traveling to Cairo, Luxor and Aswan.

The Chambers of Tourism currently plan to send tourism delegations to the United States and Latin America to promote Egyptian tourism, Zayat said. He added that a delegation would be sent in October to eastern US cities, including New York, Washington and Boston, as well as Toronto and Montreal in Canada, with the mission of attracting more tourists to Egypt. Another delegation is scheduled to depart in November to the cities of San Francisco, Los Angeles and Chicago, as well as Mexico City. The third delegation will target South American countries, namely Argentina, Brazil and Chile.

El-Zayat said that the United States, Canada and South America are known for their cultural tourists, and that the delegations will contribute to Egypt being more accepted by the West — a trend that has already begun thanks to President Abdel Fattah al-Sisi’s repeated visits to foreign countries.

According to the strategy presented by the Ministry of Tourism to the Council of Ministers on April 21 — a copy of which Al-Monitor was able to obtain — the spending rate of tourists in 2020 is expected to be $100 per night — an increase of $23 from 2014. The strategy aims to amass 260 million tourism nights in 2020, compared with less than 97 million nights in 2014.

The Egyptian Ministry of Foreign Affairs issued a decree March 17 banning the distribution of individual visas to foreigners at Egyptian airports. However, the ministry reversed its decision April 2 after owners of tourism companies showed that they were negatively affected by the decision.

El-Zayat said that this decision would have negatively impacted Arab tourism as a whole, as most Arab tourists visiting Egypt, individually or as families, are not required to obtain entry visas in advance. “We would have lost the Arab market,” he said.

Arab tourists totaled 1.8 million in 2014, accounting for about 16.4% of the total inbound tourism to Egypt, according to the Egyptian report. The Ministry of Tourism plans to have Egypt account for 34% of inbound tourists to the Arab world by 2020, compared with 25% in 2014.

Tourism relies on political and security stability, which has been strengthened following a long period of violence in Egypt. This political stability positively affected the number of inbound tourists to Egypt, which rose by 10.6% in March compared with the same month last year.

Adla Ragab, economic adviser to the minister of tourism, told Al-Monitor that the first quarter of 2015 witnessed an increase of 6.9% in the total number of tourists coming to Egypt, noting that about 2.15 million tourists visited the country during that period.

Bookings indicate that the total number of tourists will reach about 12 million by the end of 2015, which misses the peak recorded in 2010, when 14.7 million tourists visited the country. However, this number exceeds the one registered in 2014 as 9.9 million, according to Ragab.

Ragab said that indicators regarding summer bookings improved by about 15% when compared with the summer of 2014, noting that the next winter season bookings indicate an increase from 15% to 20% compared with last winter.