Egypt has awarded a major advertising agency a multimillion-dollar project to promote Egypt abroad in the hopes of boosting tourism following the security crises that have hurt the industry over the past few years. 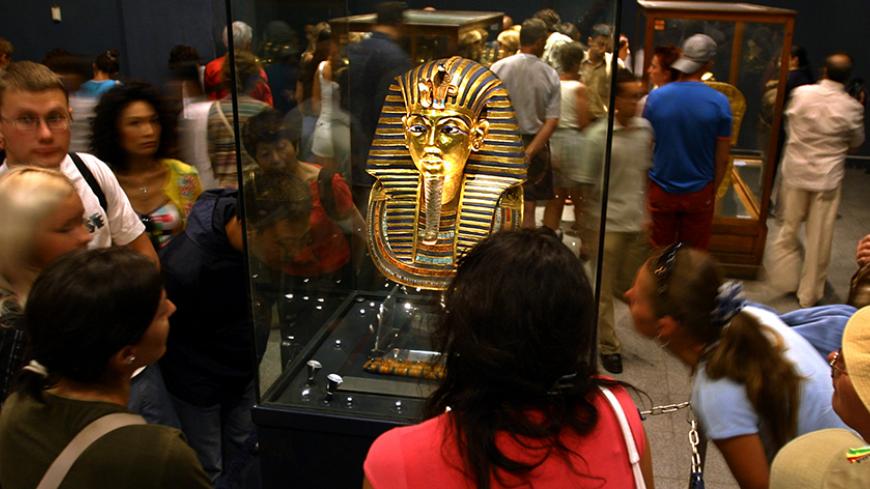 Tourists look at the gold mask of King Tutankhamun at the Egyptian Museum in Cairo, Nov. 18, 2004. - REUTERS/Aladin Abdel Naby

CAIRO — Tourism is beginning to pick up in Egypt. To encourage greater and faster growth, the country is awarding a $68 million, three-year contract to New York advertising agency J. Walter Thompson Co. (JWT) to run a public relations campaign in 27 markets around the world.

The Egyptian Ministry of Tourism announced the contract on Aug. 23. JWT had promoted Egypt before the outbreak of the revolution in January 2009. Since then, the country has been relying on the ministry's offices for promotion.

Elhamy el-Zayat, chairman of the Egyptian Tourism Federation, told Al-Monitor, “Improving Egypt’s tourism sector depends on improving the view of the country’s domestic situation, as many countries believe that Egypt has no security or stability for the time being.” He stressed, “The biggest challenge for Egypt is to shift this perspective, especially since Egypt is the heart of the Arab world, which has now become a source of news of violence in the world.”

The terror attack in Sousse, Tunisia, at the end of June has also negatively affected Egyptian tourism, Zayat added. “JWT will be able to respond to all that is being said about Egypt in foreign markets, because it is one of the world’s largest companies in the public relations and advertising field,” he said.

Amal al-Masri, chief strategy officer for Lebanon-based JWT-Middle East Africa, told Al-Monitor that JWT will take advantage of social media to get the word out.

“The company will focus on social media sites in its work in promoting the country, as they are the most effective now, and would affect tourists’ decisions in choosing their destinations. The company will also use conventional marketing methods through advertising campaigns in major television channels and advertising spaces in newspapers, but to a lesser extent than social media marketing," she said.

“We will also respond to abusive news distorting Egypt’s image in case of terrorist incidents, and we will also respond to criticism. However, we will also focus on and promote the positive aspects in Egypt. The company also seeks to host large numbers of famous bloggers to visit a number of locations in Egypt and blog about the country to reach the largest numbers of their followers, which is an excellent way of advertising."

Masri added that JWT's Mirum unit will also promote Egypt over social media. Mirum is the umbrella company for 11 digital agencies in 17 countries.

The company plans to highlight the difference between North and South Sinai. The latter includes several tourist cities such as Sharm el-Sheikh, Taba, Dahab and El-Tor. "Many foreigners are under the impression that Sinai is a battlefield and not safe to visit,” she said.

According to previous statements by Egyptian Tourism Authority Chairman Samy Mahmoud, the Ministry of Tourism has the right to terminate the agreement in case of a breach of contractual terms or poor performance.

Egyptian Tourism Minister Khaled Ramy has said Egypt aims to attract 20 million tourists by 2020. This year, the country seeks to attract between 11 million and 11.5 million tourists and achieve revenues of $9 billion to $9.5 billion. Comparing the first half of 2015 with the same period in 2014, Egypt’s tourism revenues have risen 3.1% and the number of tourists has increased by 8.2%.

"Increasing the number of tourists in Egypt necessitates giving attention to cultural tourism, such as temples and museums, instead of focusing on beach resorts and coastal cities only," he said. "Tourists from the US and Canada are particularly interested in cultural tourism, in addition to some countries in South America, India, China and Australia. Thus, Egypt ought to be promoted in such countries.”

The Egyptian Tourism Federation is planning promotional campaigns in the United States, Canada, Mexico and South American countries including Brazil, Chile, Peru and Argentina during October and November.

“Former Minister of Antiquities Zahi Hawass will deliver speeches during symposia in North America that will attract a large number of people and senators," Zayat said. "His speeches will be covered by the media, offering another sort of publicity for Egypt.”

Zayat will discuss with JWT the possible benefits of visits by President Abdel Fattah al-Sisi to a number of countries during the coming weeks. "In his upcoming visits to Japan and North Korea, Sisi would deliver speeches at the reception, which will be attended by the presidents of these countries. He would draw the attention of the attendees to the current stability Egypt has been witnessing lately.”