With Egypt’s most vital economic sector, tourism, at record lows since revolution, the new government is launching a number of initiatives to attract tourists. 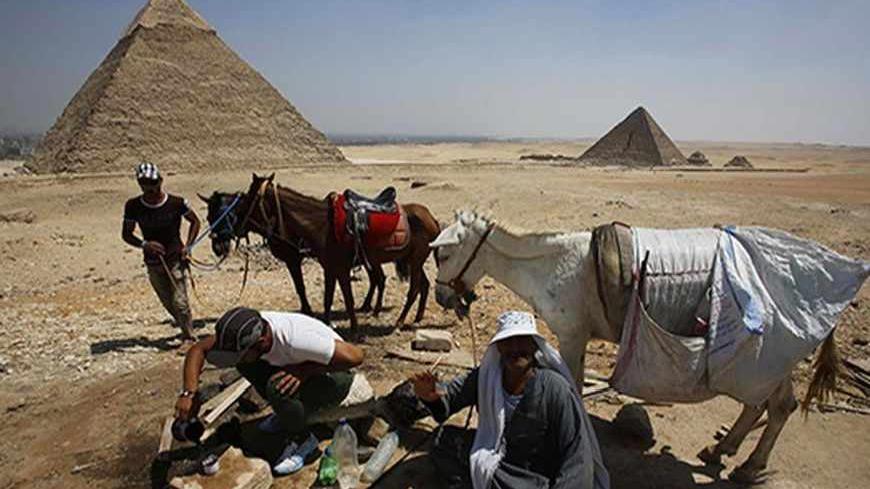 Camel guides drink tea as they wait for customers at the Pyramids Plateau in Giza Pyramids, on the outskirts of Cairo Aug. 26, 2013. - REUTERS/Youssef Boudlal

The crisis affecting tourism in Egypt, a sector on which the economy heavily relies, has been worsening by the day since the January 25 Revolution. At every sign of recovery, tourism relapses again due to the fall of two regimes in just over two years and the subsequent tenuous security situation, in addition to the declaration of a state of emergency and the imposition of a curfew.

The Egyptian government is trying to restore Egypt’s position on the international tourism map through the execution of an emergency plan. The Ministries of Tourism, Antiquities, Civil Aviation, Foreign Affairs, Local Development and Communication are taking part in this multi-sector plan, which will be comprised of hosting night-time events for international tourism companies in the most important touristic regions of Luxor and Aswan, in addition to opening sites to the public that were previously inaccessible. Day trips will also be launched and airfare will be reduced to promote the provinces of the Red Sea and South Sinai, deemed safe touristic destinations. Neither has been affected by the developments Cairo is currently witnessing.

The plan also involves taking advantage of Oct. 22 — one of only two days a year when the sun’s rays reach the inner sanctuary of the Abu Simbel Temple and shine on the statue of Ramses II — to launch an international advertising campaign through Egypt's embassies. A number of international figures and artists, including former British Prime Minister Tony Blair, will be invited to contribute to promoting tourism and restoring trust in Egypt as a tourist destination, as was announced by Tourism Minister Hisham Zaazou.

Zaazou added that he will contract with international public-relations companies to improve Egypt’s image among tourists, since direct advertising will not yield results at this stage. Zaazou noted that trips for prominent international journalists will be organized and to convey the "real image" of Egypt.

Zaazou said that the plan heavily relies on using technology, announcing that 15 destinations were specified from which live coverage will be broadcast online within the next few months. He reiterated his deep concern for cultural tourism and the necessity of promoting it.

Zaazou affirmed that cooperation protocols were set with the Ministries of Communication and Information Technology, in coordination with companies and hotels, to support domestic and Arab tourism through mobile-phone applications and text messages, in addition to specific offers for different social groups. All of this will be linked to a communication center in the ministry that deals with tourism services.

Egypt’s Foreign Ministry is also to play a key role in reviving tourism. Minister of Foreign Affairs Nabil Fahmi asked ambassadors to Egypt to talk to their respective governments about loosening the imposed restrictions on tourists, especially in the regions that are not subject to curfews and enjoy stability, such as Sharm el-Sheikh and the Red Sea.

For its part, the Ministry of Antiquities issued its own proposal to jump-start tourism in Egypt. This proposal aims to increase the number of nights foreign visitors spend in Egypt, in addition to attracting tourists to visit the coast and the most famous touristic regions in one-day trips. The ministry is also discussing temporarily exempting aircraft from international landing and takeoff fees in some airports in the southern provinces until the tourism sector recovers.

Despite all the incentives the government is working on offering in order to attract tourists, an insurance crisis is still ongoing. Insurance companies are refusing to grant policies to tourists visiting Egypt, citing prevailing risks and violence. This impedes the activity of tourism companies and has led Luxor governor Tarek Saad el-Din to meet with many ambassadors, tour operators and international organizations to discuss resuscitating tourism in Luxor, which is home to one third of the world’s most valuable monuments and antiquities. The residents of Luxor rely primarily on tourism for revenue. This is why the province is working on lifting the travel ban to Egypt, which will encourage insurance companies to reconsider this decision.

Elham al-Zayyat, head of Egypt’s federation of tourism chambers, told Al-Monitor that it is required, when getting a tourist visa for any country, to get a temporary life insurance policy good for 10 to 15 days. Some countries allow foreign visitors to receive treatment in their hospitals for free as long as the insurance policy is effective. French law, however, recently ended this process.

Since Egypt is subject to an international travel ban due to the turmoil, the Egyptian plan proposes to revive tourism by letting Egyptian insurance companies grant foreign visitors insurance policies if they cannot otherwise get them. This idea is still an idea, neither detailed nor thoroughly discussed yet.

Zayyat added, “This proposal aims to facilitate the issue of life insurance for international tourism agencies and foreign tourists, given the tenuous security situation. The federation believes that the idea is promising, yet difficult to implement.” He noted that there is indeed a life-insurance policy available against "riots," yet this is not considered sufficient for granting tourism visas.

Given the extent to which the government has invested in these moves to re-launch international tourism, the authorities in Luxor have referred to a French security expert named Bernard Jacquemart to check on the security situation in touristic and archeological regions, and will announce the results of his observations to agencies in the countries that tourists come from. This expert, who works for one of the most important French security companies, will visit Luxor, Taba, Sharm el-Sheikh, Cairo, Hurghada, Marsa Alam and Aswan.