Egypt gears up for the big opening of the Grand Egyptian Museum in 2021, where 50,000 artifacts will be displayed. 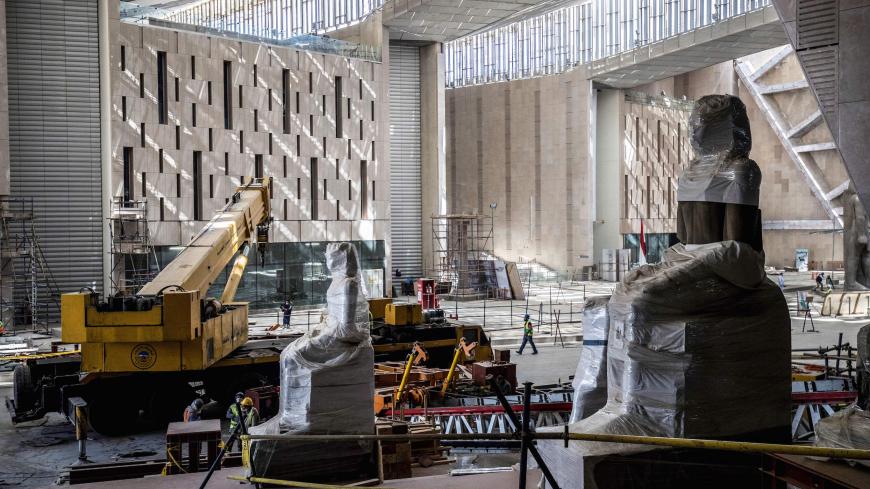 This photo shows the construction work at the entrance of the Grand Egyptian Museum, which is set to be completed this year, in Giza on the southwestern outskirts of the capital Cairo, Egypt, April 13, 2020. - KHALED DESOUKI/AFP via Getty Images

CAIRO — Some 2,000 artifacts of various sizes have recently arrived at the Grand Egyptian Museum, located in Remaya Square. They were moved from the Egyptian Museum in Tahrir Square, Tell el-Yahudiya (Mound of the Jews) and the Giza Pyramid complex to be among the distinctive items on display at the museum.

Maj. Gen. Atef Meftah, general director of the Grand Egyptian Museum, said in a Sept. 19 press statement that the number of items transferred to the museum had reached 54,000 artifacts so far, including two pink granite columns belonging to King Ramses II, each six meters (20 feet) high and weighing 13 tons, which will be the last pieces to be placed on the Great Stairs of the museum.

Tayyeb Abbas, director of archaeological affairs at the Grand Egyptian Museum, said in a press statement that these items include 54 artifacts from the King Tutankhamun collection, including jewelry and gold necklaces as well as a gilded wood statue of Tutankhamun standing with his left foot forward on a rectangular base placed on the back of a leopard, holding a stick in one hand, a flail in the other, a Hedjet on the head and a wide necklace covering his chest and shoulders.

Eissa Zeidan, head of the restoration affairs and transfer of antiquities department at the museum, explained that the items are being transferred based on a specific schedule and special display scenario at the Grand Egyptian Museum, which is set to be inaugurated next year. He told Al-Monitor that 47 wooden pieces of Khufu's second solar ship were also moved from the Giza Pyramid complex, making the total number of wooden items transferred to the Grand Egyptian Museum 1,053.

Speaking to Al-Monitor over the phone, Egyptian archaeologist and former Minister of Antiquities Zahi Hawass said that the Grand Egyptian Museum is the most important global cultural project of the 21st century, and will be the greatest and largest museum in the world. Its interior design and the display of antiquities will be dazzling for the tourists, he said, adding that 100 monumental statues of the kings who ruled Egypt throughout the ages will be displaced at the museum’s entrance hall.

Hawass noted that the state and political leadership have particular interest in the Egyptian antiquities, and that President Abdel Fattah al-Sisi will announce the inauguration date, scheduled for next year. It will be a message to the world that Egypt is a safe and secure country and a tourist destination, he added, noting that the museum is the gift Egypt is offering to the world.

Once inaugurated, the Grand Egyptian Museum will amaze the entire world, he said. He explained that a group of artifacts was moved from the Egyptian Museum in Tahrir Square and other museums to be placed in storage labs for antiquities, and that 60,000 artifacts will be on display at the museum.

Mostafa Waziri, secretary-general of the Supreme Council of Antiquities, told Al-Monitor that the museum’s collection was completed, and that the total number of artifacts that will be on display amounts to 60,000 pieces. He said that the entire world, including the international media, is awaiting the inauguration of the museum, since it will include treasures that have not been on display before.

He noted that visiting the Grand Egyptian Museum will be a different and unique cultural experience, as the antiquities will be displayed in a different way from other museums. He said that it contains artifacts of King Amun, all of Tutankhamun’s treasures that will be on display at the same place for the first time in history, in addition to the huge statues, including the 11-meter-high (36 feet) and 3,200-year-old statue of Ramses II.

Elhamy el-Zayat, chairman of the Egyptian Federation of Chambers of Tourism, told Al-Monitor, that the Grand Egyptian Museum will be the top tourist attraction once inaugurated next year, which the Egyptian state will benefit from in marketing tourism.

He said that a number of presidents and royalties around the world, as well as public figures and the international media, will be invited to attend the opening ceremony. The number of tourists will double in the future with the Grand Egyptian Museum displaying important artifacts for the first time, according to Zayat.