Egyptians outraged at plans to leave best beaches to tourists

Egypt has a bad record when it comes to tourist harassment, but keeping locals out of beaches in Alexandria may not be the best way to prevent it. 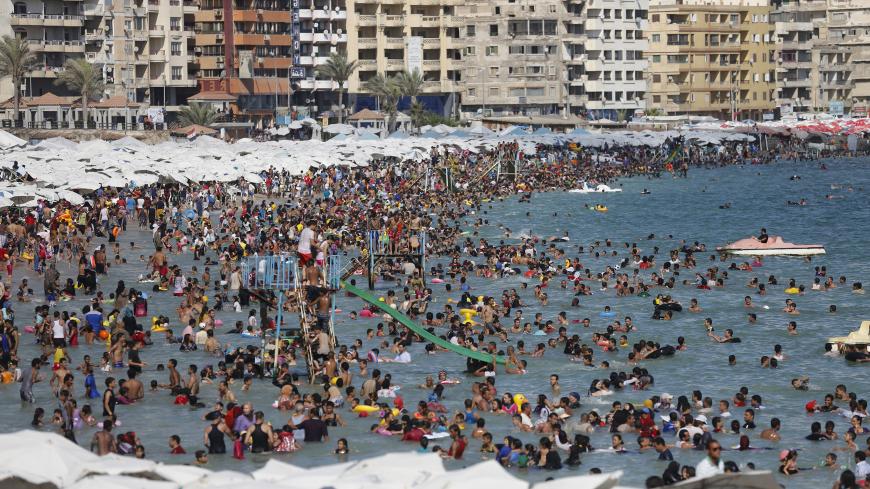 Egyptians crowd a public beach during a hot day in the Mediterranean city of Alexandria, Egypt, Sept. 5, 2014. - REUTERS/Amr Abdallah Dalsh

A government plan to promote tourism in Alexandria — Egypt's second-largest city, which is located on the Mediterranean coast 140 miles northwest of Cairo — has sparked controversy among the city's residents and holidaymakers. The plan, unveiled in recent days by Ali al-Manesterly, the chairman of the Alexandria Chamber of Travel Agencies, includes allocating private beaches exclusively for foreign visitors.

"It's insulting and deeply disturbing," Amro Ali, an Alexandria-based sociologist, said in reference to the decision. Denouncing the plan as "a form of auto-colonialism,” Ali told Al-Monitor that Alexandria was already losing its beaches due to rising sea levels and privatization. He added, "The few remaining public beaches are not well-kept, and citizens still have to pay to get in. The few good beaches that exist charge a lot of money and are beyond the means of the average Egyptian, so there is already a class barrier in place."

The Alexandria Chamber of Travel Agencies has signed agreements with Greece, Cyprus and Italy to promote Alexandria as a tourist destination in the hope of increasing the inflow of tourists from the three Mediterranean states, Manesterly was quoted as telling Al Masry Al Youm newspaper.

Direct flights to Alexandria's Borg El Arab Airport will be established under the plan, which also seeks to increase the airport's annual passenger handling capacity to 4 million passengers by 2022 — more than three times the current capacity of 1.2 million. In parallel, the number of hotel rooms will also be increased to cater to the projected growth in tourism, according to Manesterly.

He defended the decision to establish tourist-only beaches in the port city, insisting that this would "create an opportunity to promote beach tourism in Alexandria." He added that the beaches would be tailored to suit the needs of the foreign visitors.

But many Egyptians are skeptical about the plan.

"Keeping the locals out of certain beaches is discriminatory and will likely fuel anti-foreign sentiment," complained 49-year-old Samira Abdel Meguid, an Alexandria resident who works at the Arab Academy for Science and Technology library. A mother of two, Abdel Meguid told Al-Monitor that her family no longer spends the summer holiday in Alexandria. "To escape the overcrowded beaches of Alexandria, we spend our vacations at one of the resorts on the northwestern coast," she said, in reference to the long coastline stretching from Alexandria westward to Salloum on the border with Libya.

Up until the mid-'90s, Alexandria was a popular summer destination for well-to-do Egyptian holidaymakers, but this has now changed. Decades of state neglect, population growth, beach erosion and heavy pollution have left their mark on the city, long considered the jewel of the Mediterranean. As Alexandria grew more dilapidated and congested, the country's upper crust moved west, spending their summers at the pristine beach resorts farther along the coast. In recent years, holiday homes have mushroomed along the shoreline to meet the rising demand. Meanwhile, Alexandria's public beaches have become the preserve of the less privileged.

As a tourist destination, Alexandria has traditionally been outshined by Cairo, Luxor — which boasts a wealth of Pharaonic monuments — and Red Sea diving hotspots like Sharm el-Sheikh. Tourists visiting Egypt have tended to overlook Alexandria or limit their stay there to a quick day trip. Despite its relatively low ranking as a holiday destination for travelers to Egypt, Alexandria has a great deal to offer tourists, including Greco-Roman monuments and colonial-era buildings. The notable Alexandria Library was built in 2002 on what is believed to be the site of its ancient predecessor, the Royal Library of Alexandria. Plans are already underway to build an underwater museum that would showcase the submerged remnants of Cleopatra's palace.

For travelers seeking sun, sea and relaxation, the idea of private beaches that shield them from the prying eyes of curious locals may perhaps sound appealing. Some Alexandria residents are hoping the tourist-only beaches will attract more visitors to their city. Others see the move as an attempt to protect female foreign visitors from sexual harassment, which is widespread in Egypt despite a 2014 law criminalizing the behavior. Last April, Egypt introduced stricter penalties up to 10,000 Egyptian pounds ($558) in a bid to deter any kind of harassment and pestering of tourists.

"Those who thought of the idea [of tourist-only beaches] are pragmatic. They realize that the society and the culture have changed. Alexandria was once a cosmopolitan city where Egyptians and foreigners intermingled. Today, many visitors — especially foreign women — feel uncomfortable or unsafe walking in the streets of Egypt. Women in bikinis are likely to face harassment from Egyptian men if they share the same beach," 39-year-old Alexandrian Mira Adam told Al-Monitor. "Better safe than sorry," said Adam, who is single and works as a freelance translator and editor.

It is a far cry from the "Greco-Arab outpost where East met West," as the city was described by British writer Lawrence Durrell in his 1960 novel series "The Alexandria Quartet." The "seductive, sensuous city" portrayed in Durrell's novels is the Alexandria of the early 19th century when the city was home to a varied blend of communities including the Greeks, Italians, Armenians, Belgians and other foreign minorities who lived there and assimilated well into the liberal and libertine society of the time. By the end of the early 20th century, they had become virtually Egyptianized. Jews, one of the main themes in Durrell’s novel, also constituted an important part of this open society.

A surge in nationalism in the early '50s, following the 1952 Revolution that ended the monarchy, also marked the beginning of the end of "cosmopolitan Alexandria.” Members of Alexandria's foreign community and Egyptian Jews left the country after the enactment of regulations that paved the way for the arrests of citizens without charge, seizure of their businesses and nationalization of their assets. The Jews and foreign minorities were targeted by the Gamal Abdel Nasser regime's relentless clampdown on civil liberties.

The late '70s saw the rise in conservatism and growing religiosity that some analysts attribute to the Gulf oil boom when hundreds of thousands of Egyptians left to work in Saudi Arabia and returned home with ultra-conservative Wahhabi beliefs that were previously alien to Egyptian society. Perhaps the most visible impact of the conservative Islamic resurgence has been the steady increase over the course of the last four decades in the number of women wearing the hijab, the traditional headscarf worn by Muslim women. Alexandria is today a "hotbed of political Islam,” Hisham Melhem, the Washington bureau chief of news channel Al-Arabiya, was quoted by Foreign Policy as saying in a December 2014 article. James Traub, who wrote the story, contended that the city was also "the base of Egypt's Salafists," hard-line conservatives who support a strict imposition of Sharia, or Islamic law.

Since 2014, Islamists have been the primary target of an ongoing security crackdown on dissent in which tens of thousands have been detained. Meanwhile, the military and police are at war with Jihadi groups in the Sinai Peninsula. There is, however, another form of extremism that has Amro Ali "deeply worried," and that is extreme capitalism.

"The tourist-only beaches — this kind of segregation — is hyper-capitalism that respects no identities or creativity or narratives that make the city what it is. The Egyptian pound is the ultimate goal [for the profiteers], and nothing else really matters. It's all about making more profit even at the expense of the common good," he lamented.