In a bid to revive its historical heritage, the governorate of Alexandria repaired and rehabilitated historical trams that were manufactured in 1931. 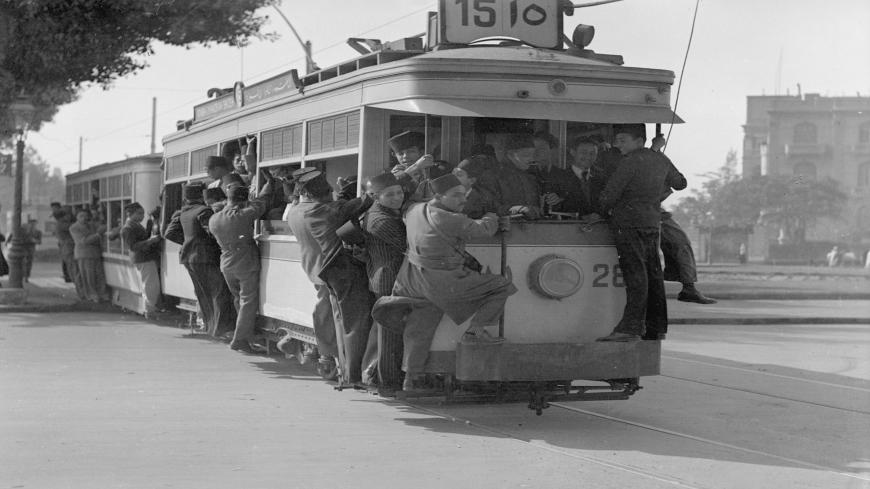 Passengers hanging on to the sides of a tram in Cairo, Egypt, February 1936. - Fox Photos/Getty Images

CAIRO — Alexandria governorate has recently launched a new project to stimulate tourism and revive the governorate's heritage, announcing the rehabilitation and operation of the Belgian-made historic trams manufactured in 1931.

Maj. Gen. Mohamed El-Sherif, governor of Alexandria, said in a statement Oct. 6 that bringing back the historic tram is a “wonderful” idea to revive the Alexandrian heritage, and remind the city's residents of the long history of the tram station that dates back more than 90 years.

The governorate was keen to preserve the shape of the tram carriages during the restoration works that began months ago. It kept the same brown color of the wooden carriage seats that had made them famous in the past.

The Alexandria Passenger Transportation Authority affiliated with the Ministry of Transport held training courses Oct. 1 — ahead of the inauguration of the tram — for drivers to teach them how to drive the Belgian tram, before using it on the streets of Alexandria. The authority announced the historic tramway would operate from 1 a.m. to 9 p.m.

Alexandria is famous for its trams that were first operated in 1860 and are still used by citizens to this day. Cairo, the capital of Egypt, had completely dispensed with the tram as a means of transportation after removing all the tracks by 2018.

In 1860, the Egyptian government granted British engineer Sir Edward St. John Fairman a concession to build a railroad connecting Alexandria and Raml. In 1897, a Belgian company was established in Alexandria under the name of the Alexandria Tramway company, which no longer exists, to operate the tram. The company established the trams and a number of lines across all neighborhoods of Alexandria.

Alexandria has always been trying to exploit the old and historic trams to stimulate tourism. In 2015, it launched the “Tram Cafe” tourist project aimed to develop dilapidated historic trams and transform them into mobile luxury restaurants.

The Ministry of Antiquities resorted to historic tram carriages in order to stimulate tourism before. In October 2019, it placed one of the oldest trams that was used in Egypt in the early 20th century in the garden of the recently restored Baron Empain Palace in Heliopolis.

Mohamed Metwally, director general of Alexandria and North Coast Antiquities at the Minsitry of Antiquities, said the tram is one of the most famous landmarks in Alexandria. “This drove Sherif to restore the historic trams to revive the Alexandrian heritage,” he told Al-Monitor.

He said that repairing and operating the historic carriages of the tram is set to boost tourism, as visitors enjoy a ride in a tram that is more than 90 years old.

Metwally added that many foreigners have lived in the governorate in the past, such as Greeks and Cypriots. “The state — through the Ministry of Immigration — is encouraging those nationalities to visit Alexandria again through an initiative dubbed ‘Return to Roots.’ Therefore, it is necessary to preserve the distinguished heritage monuments of the governorate, most notably the historic trams that tell the stories of foreigners who lived in ancient Alexandria.”

The Return to Roots initiative launched in 2018 consists of organizing tours for the descendants of the Greeks and Cypriots who once lived in Alexandria. It aims to introduce them to the governorate's history, its most important landmarks and the places where their ancestors lived. The initiative is part of the efforts of the Ministry of Immigration aimed to strengthen ties between Egypt, Cyprus and Greece.

Ibrahim Issa, head of the trade union committee for the employees of the Alexandria Passenger Transportation Authority and a tram driver, said that tourists who visit Alexandria always want to see the old trams.

Issa, who has been working as a tram driver for 21 years, told Al-Monitor that reoperating the historic trams came after intensive work and efforts. “The drivers of these vehicles have undergone training courses on how to deal with and maintain these vehicles,” he said. “The Alexandria Passenger Transportation Authority owns a number of historic trams and they will be used and reoperated in the coming period, in a bid to stimulate tourism in Alexandria.”

The head of the Heritage and Traditional Arts Association in Alexandria, and former head of Alexandria's tourist guide union, Eslam Assem, told Al-Monitor that Alexandria was the first Egyptian city to use the tram as a means of transportation. “This explains the strong connection between the tram and the Alexandrians,” he noted.

Assem said, “The reoperation of the historic trams will definitely encourage tourism in the governorate. However, tram passengers should be accompanied by a tour guide explaining to them the tram history and the areas where it passes through.”

In 2017, the governorate of Alexandria opened a small museum for the tram at Raml station. The museum tells the history of the Alexandria tram through miniature models of trams that have been used and developed over the years, along with historic items such as the bag of ticket collectors and photos of the shape of the tram carriages since the tram inception and throughout the stages of its development.

Assem concluded that the state is trying to restore the heritage in the city of Alexandria, whether by reviving historic trams or restoring historic palaces, in a bid to promote tourism in the city.