Egypt's post-revolutionary instability has contributed to the demolition of Alexandria's historic districts. 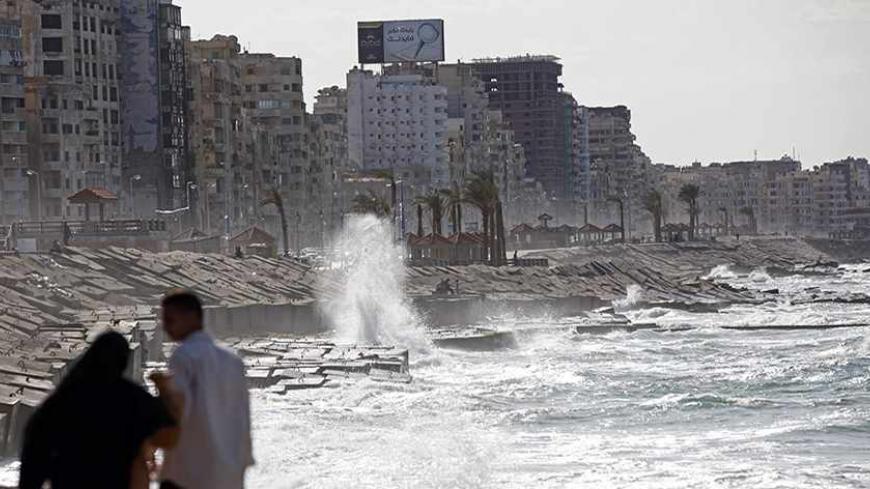 A couple walks near the shoreline in Alexandria, Nov. 14, 2010. - REUTERS/Goran Tomasevic 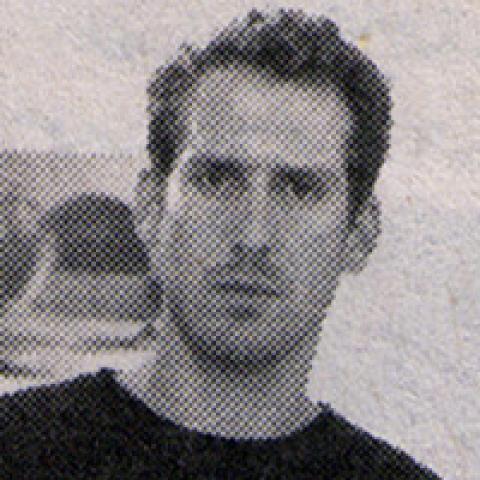 ALEXANDRIA, Egypt — The penthouse of a multi-story, brick high-rise erected close to the city center yields up sweeping views across Alexandria’s historic bay and old town. The apartment on Sultan Husayn Street — a leafy boulevard studded with graceful early 20th century apartment buildings — is guarded 24 hours a day by watchmen. Being the tallest in the area, its balcony affords uninterrupted views across Alexandria’s historic downtown: from the eastern harbor’s Ottoman-era fort to the glitzy hotels and patisseries where the city’s multicultural bourgeoisie once frolicked.

With an asking price of just $200,000, this dream penthouse address appears too good to be true.

And perhaps it is: The almost certainly illegal building is one of more than 27,000 to have sprouted in the city since Egypt’s 2011 Revolution overthrew Hosni Mubarak and ushered in an era of instability and void in authority.

“Revolutions are always like this,” said Fouad Taman, an Alexandrian poet and former military prosecutor who claims to have inherited the moniker "the Bard of Alexandria" from celebrated Greek poet Constantine Cavafy, who lived and died there. “They happen and are tumultuous, but then subside into stability. Until that happens, everyone takes advantage to build illegally.”

Now, as the buzz of dozens of simultaneous construction projects testifies, the new building’s unobstructed view is unlikely to last for long: two other high-rises are under construction in the same alley and more are shooting up around the city. What’s more, half the building consists of unsold and therefore unfinished, debris-cluttered apartment shells. As for its 24-hour watchmen, they are not there to protect gilded residents but to intimidate the neighbors and raise the alarm in the event the municipality or criminal gangs arrive demanding a payoff.

Egypt's post-revolutionary instability has contributed to rampant demolition and development in Alexandria's belle epoque districts. In recent years, thousands of turn-of-the-century villas and apartment blocks have been eliminated to make way for high-rise apartments in Egypt's second-largest city.

In the late 19th and early 20th centuries, the city used to be one of the Mediterranean’s most cosmopolitan locations, mixing Maltese, Greeks, Levantines, Italians, Jews and Europeans in a heady blend that inspired literary works such as Lawrence Durrell’s The Alexandria Quartet.

Now, in a bid to save some of the city's decaying architectural heritage, a small group of preservationists is seeking to halt the rampant development. Yet, a combination of overpopulation and neglect are complicating their task.

“We have no idea about the safety of these buildings,” said Mohamad Aboelkhier, an architect and co-founder of the Save Alex campaign. “They haven’t been tested, and we’re extremely worried about the first earthquake. Every couple of months another building collapses.”

Decades of governmental inertia under the previous regime coupled with still-active rent-control laws and an authority vacuum in the years since the revolution allowed Alexandria’s construction mafias to accelerate their unlawful building. They paid off residents or intimidated them into leaving their heritage homes, tore out doors and windows and flooded entire buildings with water as a prelude to inviting the municipality around to declare them unfit for habitation. Meanwhile, the streets of the historic center are swamped with unlicensed vendors, its stately buildings often have at least one illegal floor grafted on, and native Alexandrians avoid the area.

But not all of Alexandria’s architects are against the wave of construction. Many argue that history must be sacrificed before the needs of Alexandria’s exploding 6-million-strong population.

“What Alexandria needs is an entire new city to the west of it,” said Mohamed Temawy, a spokesman for a construction company called the Stanly Group. “This is the only way to fix what is happening here.”

“It’s a luxury to keep something looking to the past,” said Mai el-Tabbakh, a conservationist with a focus on sustainable heritage. “You have to keep peoples’ requirements foremost.”

The boomtown years of late 19th and early 20th-century Alexandria were sparked by a Dubai-style tax-free investment policy and a massive overhaul of infrastructure including electricity and a tramline, at a time when few cities on the Mediterranean boasted similar amenities. A motley collection of workers, adventurers and refugees washed up on Alexandria’s port, united by a desire for a new life. But despite creating what some hark to as a model melting pot of Western-style modernity and social excess, they failed to build lasting bridges with ordinary Egyptians.

“If current Egyptian society doesn’t feel any appreciation for these buildings, it’s due to historical and colonial reasons,” said Tabbakh, pointing to a collection of genteel buildings constructed in an eclectic range of architectural styles — neoclassical, baroque, art deco, neo-gothic. “The foreign communities recreated architectural Disneylands, lost homelands from which they’d been expunged and in whose place they erected nostalgic, Venice-style constructions. There was nothing organic about them, nothing linking them to Egypt.”

As Alexandria’s ballooning population brings its sewage and electricity networks under increasing strain, private companies are seeking to fill the vacancies the authorities have created through their absence.

Stanly Group is an Egyptian company formed in the United Arab Emirates (UAE), which has been on a public relations charm offensive since arriving in Egypt in 2011 in the aftermath of Mubarak’s ouster. It sponsors high-profile cultural events, inviting the Arab world’s best-known and priciest artists, holds well-recompensed architectural design competitions for its new projects and renovates public squares. Stanly Group constructed Alexandria’s first privately built police station in 2013 and has just inaugurated its first solar-energy-enabled school.

Still, activists are suspicious of the company’s motives and cite as evidence of a less-than-transparent agenda the company’s opaque beginnings in the UAE and its teaming up with the Greek Orthodox Patriarchate to allegedly renovate but actually demolish a heritage cinema that was Egypt’s first and oldest. What started as a renovation somehow turned into a demolition, and now a luxury mall project is to be built on the spot featuring a “VIP cinema” that was initially touted as a “replica” of the original but is now going to be “a new Rialto cinema with the old theme,” according to Stanly Group executive manager Fady Amin. All that will remain of the cinema will be some original ledgers and other memorabilia displayed in a small museum.

“Suddenly we found their hammers in front of the Cinema Rialto, and they were demolishing,” said Zahraa Adel Awad, a tour guide who runs the conservationist website Belle Epoque Alexandria.  “They have a lot of money, more than we can imagine. And this can buy off people.”

Stanly Group protests that its intentions are altruistic and it is only looking — as the company slogan states — to “raise standards.”

“We see a responsibility for Stanly Group to be like a truck powering the economy,” said Temawy. “When everyone started taking their money out of Egypt, we did the opposite. If we were just investors, we’d never invest — it’s because we’re Egyptians, and love this land that we’re here.”

But he also admitted, “It’s the perfect time for acquisitions. You cannot imagine how profitable it is.”

Temawy sees Stanly Group’s role as bringing UAE-style professionalism and architectural design to Alexandria’s luxury sector, with an eventual aim of privatizing social services. But he cautions that Egypt’s entrenched socialist economy is not conducive to business.

“We have a lot of schools but no learning, a lot of hospitals but no treatment. The future is in private schools, private hospitals, private traffic control. This is the way, but the lawmakers are not used to it.”

The ushering in of modernization of Alexandria will coincide with the uprooting of its historic past.

“Alex was meant to be cosmopolitan as a raison d’etre, with different races coming together in the spirit of Hellenism which was the spirit of the time,” said professor Mohamed Awad, the founder of the Alexandria Preservation Trust and a member of the remnants of Alexandria’s cosmopolitan set. “That’s why we say that Alex invented globalization.”

“There are only reminiscences left of it today,” he remarked during a late-night interview in his home, a villa crammed with objets d’art from the Middle and Far East. “A very small, minute cosmopolitan society that doesn’t exceed 300 people, and a city that’s crumbling.”

He sat back in his leather armchair. “We have lost the battles. And not just the battles, but the war as well.”

Back at the penthouse apartment, the sun is setting over a skyline increasingly tangled by lopsided brick towers. The man showing the penthouse is eager to sell: one way of safeguarding an illegal investment from a municipality demolition order is to sell the top floor, thus immediately rendering an eviction highly unlikely in a country where squatters have privileges.

“There were old buildings here, heritage,” the caretaker said. “In a few years, this view will have completely changed as new towers come up. … But it’s nice to have variation in the scenery.”