In natural gas, all pipelines go through Turkey

Natural gas from Iraq is to reach Turkey in 2017, Azeri gas is to arrive in 2018 and Iran, Russia and Israel also want to sell their natural gas via Turkey. 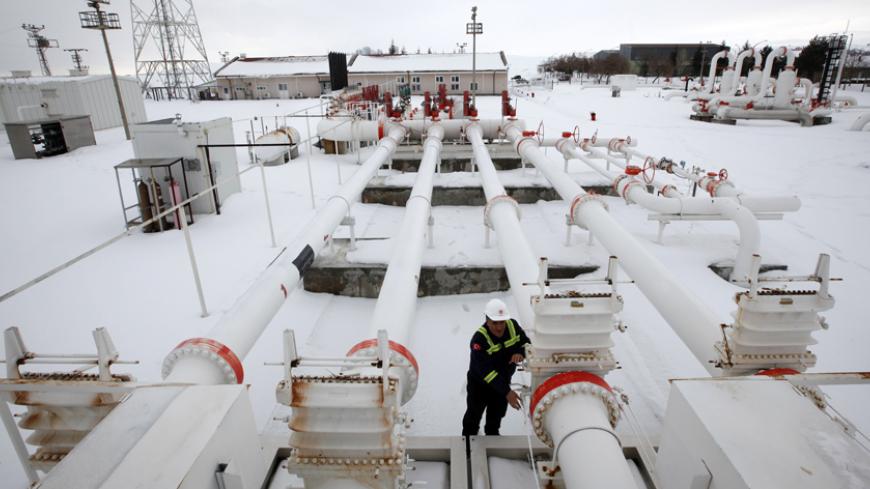 A worker checks the valves in a natural gas control center of Turkey's Petroleum and Pipeline Corp., west of Ankara, Feb. 14, 2012. - REUTERS/Umit Bektas

The number of projects that will turn Turkey into a natural gas bridge between East and West is increasing. Azerbaijan, Turkmenistan, Iraq, Iran, Russia and Israel all have a desire to transport natural gas to Europe viaTurkey.

Turkey itself is a major natural gas consumer with its annual demand of about 50 billion cubic meters. European countries that are committed to natural gas energy are frantically searching for alternative sources, mainly in the Middle East and the Caucasus, as alternatives to Russia. Producing countries are also searching for ways to reach European markets. In many of these projects, Turkey, with its bridge-like status between the Caucasus, the Middle East and Europe, is the best possible solution.

Can these projects be implemented? What is their status now?

The Nabucco project had stirred much excitement that led to agreements signed between countries. But there was a problem of finding a natural gas supply. Russia announced it would not supply gas to this pipeline and as an alternative introduced the South Stream project, which was to reach Europe via Bulgaria. South Stream meant Nabucco was stillborn. But the tension between Russia and Ukraine upended all plans. The United States and Europe imposed sanctions on Russia. EU member Bulgaria, which is a key junction to distribute to Russian gas to Europe, refused to allow the South Stream on its territory.

The Russia decision was a surprise also for Turkey. Legal infrastructure work for the construction has begun. Sergei Kupriyanov, a spokesman for Gazprom, said they will set up a new company called Gazprom Russkaya for the new pipeline that would go through Turkey.

As the work is at the preliminary project planning phase, it is not easy to firmly say that the Russia natural gas will be coming to Turkey. But there are projects that definitely will pass through Turkey. On top of the list is the TANAP project, which will carry Azerbaijan natural gas to Europe via Turkey. Its construction began in September. The work on the Turkey leg of the project will start on March 18, 2015. As of 2018, this pipeline is to annually carry 18 billion cubic meters of natural gas. The capacity is to increase to 31 billion cubic meters in five years.

Iran has indicated that it would also sell natural gas to Europe via TANAP. Now Turkmenistan is said to be interested in linking up to TANAP. Today, Turkmenistan gas is reaching Turkey via Iran. Iran, which meets 20% of Turkey’s gas needs, buys gas cheap from Turkmenistan and sells it to Turkey at a higher price.

Turkmenistan wants to have more direct access to Turkey and Europe and evade the Iranian barrier. Negotiations are ongoing between Turkey, Azerbaijan and Turkmenistan.

According to reports last week, Iraqi natural gas may reach Turkey before the Azeri gas.

Derbas Resul, the minister of reconstruction and development of the Kurdish Regional Government, announced a 50-year oil-and-gas agreement has been reached with Turkey and said: “All the process is compatible with the Iraqi Constitution. The plan is to move the gas by 2017. Since we have excess domestic supply we can transfer it to Turkey.” Iraq can supply Turkey with 20-30 billion cubic meters of natural gas, experts say. Iraqi gas is expected to be 50% cheaper than the Iranian gas.

As for the Israeli natural gas, tension between the two countries is not easing but the energy bureaucracy and diplomacy are working. A natural gas pipeline from Israel to Turkey might contribute to normalization of relations. A news analysis in daily Milliyet in April said the work on Israel-Turkey pipeline may start in 2015. Milliyet wrote:

“Reuters reported planning of an undersea pipeline between Turkey and Israel that will cost $2.2 billion and will annually transport 10 billion cubic meters of gas. In 2023, Turkey will become one of Europe’s biggest consumers of energy. A Turkish energy official told Reuters that the construction of this pipeline may start in the second half of 2015. It is believed that a 25-year gas agreement between Turkey and Israel will improve the relations between two countries.”

Recently there were reports of a major Turkish company negotiating in Tel Aviv to carry the Israeli gas to Turkey.

In sum, Turkey’s bridge status in natural gas should firm up in the coming three to four years, when Iraqi and Azerbaijani natural gas will be flowing to Europe via Turkey. Should the Russian and Israeli pipelines materialize, it would mean most of Europe’s natural gas demand will be met by pipelines crisscrossing Turkey.