Ankara doesn’t want to put all of its energy eggs into the Russian basket. 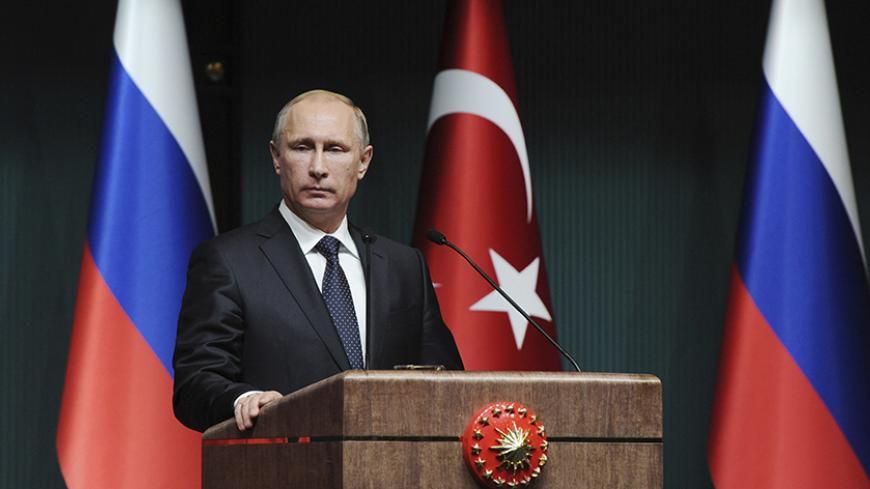 A new world seemed to be in the making when Russian President Vladimir Putin visited Turkey on Dec. 1. Putin, with his Turkish counterpart Recep Tayyip Erdogan at his side, announced that Russia and Turkey would boost their multibillion dollar trade by building a new natural gas pipeline, Turkish Stream. Fed up with the European Union’s foot-dragging, the Russian president canceled the South Stream project, which would have carried Russian natural gas under the Black Sea directly into the European Union via Bulgaria.

Putin hoped to accomplish several objectives through Turkish Stream: to enlist Erdogan as an ally in Moscow’s natural gas negotiations with EU members Greece, Italy and Austria, and to steer Turkey away from the West and in a more pro-Russian direction. Putin’s visit appeared so promising and the two leaders so defiant that one columnist talked about the “two Rambos, Putin and Erdogan,” and how they “were taking on the West.”

But despite initially optimistic analyses, Ankara and Moscow have yet to finalize a deal on Turkish Stream. Significant disagreements have slowed down the talks between the Turkish Ministry of Energy and Russia’s state-owned Gazprom. In fact, the treacherous nature of the international energy trade could wreck the proposed project.

Part of the problem lies in the conception of Turkish Stream. If completed, the new route would comprise four strings of pipelines, each carrying 15.75 billion cubic meters (556 billion cubic feet) of natural gas per year. Turkey expects to meet its growing domestic demand from one of the pipelines. The remaining three pipelines would carry 47.25 billion cubic meters into European markets through Greece.

One point of discord between Ankara and Moscow is the price of natural gas. During Putin’s December visit, the Russians promised a discount of 10.25% for the gas they were already selling to Turkey. The Turks want to get an official commitment from Russia on the discount first. Moscow, however, is reluctant to lower gas prices for existing exports before Ankara signs off on all four pipelines for Turkish Stream. Under current agreements, Turkey has a right to take its case to international mediation, which likely would rule in its favor because of the decrease in global gas prices since the 2008 economic crisis.

At any rate, the Turkish Ministry of Energy is interested in only one of the pipelines and wants Gazprom to find its own customers in Europe for the other three strings. Gazprom, however, wants Ankara to sign off on all four and help negotiate with European buyers. Economically dynamic but resource-poor, Turkey produces about 45% of its electricity from natural gas, nearly 60% of which comes from Russia. Unwilling to assume additional risks and worsen their already excessive dependence on Russia, the Turks are cautious about Turkish Stream.

But even if it were implemented fully, Turkish Stream would be born into a very complicated and treacherous global energy market.

First of all, Russia faces serious competition from Qatar. The Gulf emirate, with the third-largest gas reserves in the world, has built extensive facilities to ship liquefied natural gas to international markets. As a result, global prices have remained stable even as demand increased. At a time when Russia deals with decreasing gas revenues, its ability to finance projects such as Turkish Stream becomes questionable.

Geopolitical hurdles are even more serious than market challenges to Turkish Stream. Russia exports a majority of its natural gas through pipelines in Belarus and Ukraine. But because of its troubles with Kiev, Moscow has signaled its intent not to renew transit agreements with Ukraine, set to expire in 2019. Moscow wants to bypass land routes to reach lucrative markets in Europe and beyond.

Nord Stream is one such pipeline that allows Russia to circumvent Ukraine and Belarus and obviates the need for Turkish Stream. With a capacity of 55 billion cubic meters per year, Nord Stream sends Russian natural gas directly into Germany through a pipeline under the Baltic Sea. Because the system is still not working at full capacity, Germany hopes to become the main conduit through which Russian gas would flow into Western European markets. Plans are in place to build Nord Stream II, which would completely destroy the purpose of the four-string version of Turkish Stream.

Indeed, many experts are bearish about the fortunes of Turkish Stream. Edward Chow and Zachary Cuyler of the Center for Strategic and International Studies (CSIS) wrote in a recent article on the CSIS website, “There are many reasons to doubt the feasibility of the third and fourth strings of Turkish Stream and the South European Pipeline” that would carry Russian gas into the EU. Chow and Cuyler pointed out that “Russia and Europe will continue to be tied together by the gas trade” and “it is foolhardy to attempt to supplant Russian gas in Europe with alternatives from the United States and elsewhere, as some who look at energy through a geopolitical lens have proposed.” It would be best, they say, for Russia to use existing infrastructure and focus on its established markets in Europe.

Volkan Emre, an international energy expert based in Washington, does not dispute Chow and Cuyler’s assessment. He thinks Western countries — especially the United States — “are too hung up on Turkish Stream” and the 47.25 billion cubic meters per year that might flow into Europe via Turkey.

Still, Emre raises one important disagreement with Chow and Cuyler. He says Russia has a good shot at reaching customers beyond Western Europe. “The big bonanza for Russia,” he told Al-Monitor, “would be selling gas to Pakistan, India, China and Japan.”

Regarding Turkey’s energy needs, Emre argues that it should diversify its supplies with pipelines from Azerbaijan, Turkmenistan, Iran and Iraq. In order to do so, he recommends Turkey to be “more actively involved in the diplomatic attempts to solve the legal disputes in the trans-Caspian gas transits.” He also warns that Turkey should “support the infrastructure developments in Iranian and Iraqi natural gas sectors.” “Even if only some of these projects play out,” he said, “Turkey would become less reliant on Russia and come closer to becoming the energy hub at the intersection of Europe, Asia and Africa.”