TurkStream gas pipeline will bring Moscow, Ankara closer than ever

Turkey and Russia are set to inaugurate the TurkStream gas pipeline, which promises to increase Russian leverage in regional energy markets. 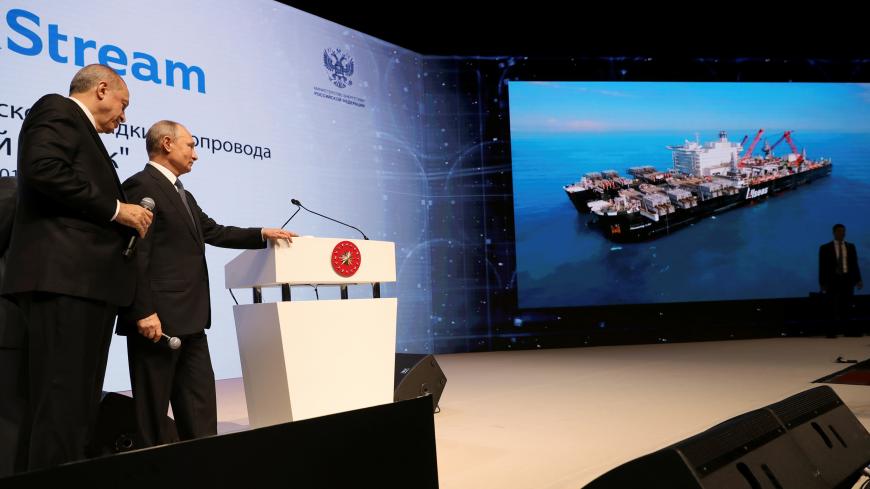 Russian President Vladimir Putin (R) and his Turkish counterpart Recep Tayyip Erdogan attend a ceremony to mark the completion of the undersea portion of the TurkStream gas pipeline, in Istanbul, Turkey, Nov. 19, 2018. - Sputnik/Mikhail Klimentyev/Kremlin via REUTERS

During a ceremony in Istanbul, the two leaders will inaugurate a project consisting of two pipelines, the first of which will begin supplying 15.75 billion cubic meters of gas to Turkish markets, while the second is scheduled to open later in 2020, carrying the same capacity to southeastern European countries.

Though the pair are expected to hold closed-door meetings regarding developments in Idlib and Libya, where Russia and Turkey back opposing sides, Turkish officials are calling the opening of TurkStream a significant advancement for the nation’s energy security.

The 930-kilometer (580-mile) pipeline linking the Russian Black Sea port of Anapa with Kiyikoy, just west of Istanbul, is opening less than two months after the inauguration of the Trans-Anatolian Natural Gas Pipeline, which transports energy from gas fields in Azerbaijan through Turkey and then to European markets.

While the developments strengthen Turkey’s position as a regional energy transit hub, the TurkStream pipeline will also increase Turkish dependency on Russian energy imports, according to Kerim Has, a Moscow-based analyst on Turkish-Russian relations.

“Russia will play the role of a hegemonic actor in Turkey’s gas market,” Has told Al-Monitor. “And from the Russian perspective, Russia can diminish its dependency on Ukraine as a transit country.”

The TurkStream is expected to largely replace the Trans-Balkan Pipeline, which runs through Ukraine to southeastern Europe but has experienced service interruptions since the 2014 Russian annexation of Crimea sparked tensions between Kyiv and Moscow. The Nord Stream 2 project, an underwater pipeline connecting Russia and Germany, is currently under construction to circumvent similar obstructions in overland routes through Ukraine.

Yet as Ankara officials position their nation as a new regional energy hub, Has points out Turkish consumers will not immediately benefit from the discounted energy prices normally afforded to transit countries. In EU markets, the average price for Russian gas is about $220 per 1,000 cubic meters, while the Turkish market will pay about $305 for the same quantity via the TurkStream pipeline, Has said.

“Even though Turkey is Russia’s second biggest gas client after Germany, … Turkey still couldn’t get any discount from the Russian side because so many political issues were involved in this process,” Has told Al-Monitor.

Since TurkStream was proposed in 2014, Turkish-Russian relations weathered turmoil when Turkish forces shot down a Russian jet near the Syrian border in 2015. Following the 2016 coup attempt, relations were restored but due to diverging Syria strategies, Has said Ankara officials made significant concessions when negotiating terms for the TurkStream project.

At the same time, Turkish imports of Russian gas through existing infrastructure have declined amid an ongoing economic recession that has seen Turkish consumers cut back on energy usage. In 2017, Turkey imported 28.6 billion cubic meters from Russia, while in 2018 imports fell to 23.6 billion before sliding further throughout 2019.

Still, alternative gas sources will be needed to offset energy imports from Iran that Turkish officials are halting to comply with US sanctions on Tehran.

Questions remain over the potential impact of new sanctions introduced through the Washington’s 2020 National Defense Authorization Act (NDAA), which includes penalties for companies engaged in pipe-laying services for the construction of the Nord Stream 2 and TurkStream pipelines. As the underwater construction phase of the TurkStream pipeline is complete, some legal analysts believe such sanctions may not impact Turkey and are more likely directed toward the Nord Stream 2 project.

During a panel discussion last month on the NDAA pipeline sanctions, John Herbst, former US ambassador to Ukraine and director of the Eurasia Center at the Atlantic Council, said the Nord Stream 2 and TurkStream pipelines would help Russia increase its leverage over eastern Europe through an expanded energy supply network that can isolate traditional transit nations such as Ukraine, Poland and Belarus.

“The Kremlin is determined to exert its influence in Europe by weakening the EU as well as weakening NATO and reestablishing its sovereignty over the nations whom it had fully in its thrall 40 years ago,” Herbst said.

by Murielle KASPRZAK and Joseph SCHMID | AFP | May 26, 2022
END_OF_DOCUMENT_TOKEN_TO_BE_REPLACED