Ankara and Moscow have inaugurated a portion of a natural gas pipeline under the Black Sea while the latest Turkish news on murdered Saudi journalist Jamal Khashoggi includes his refusal to send a message to his son. 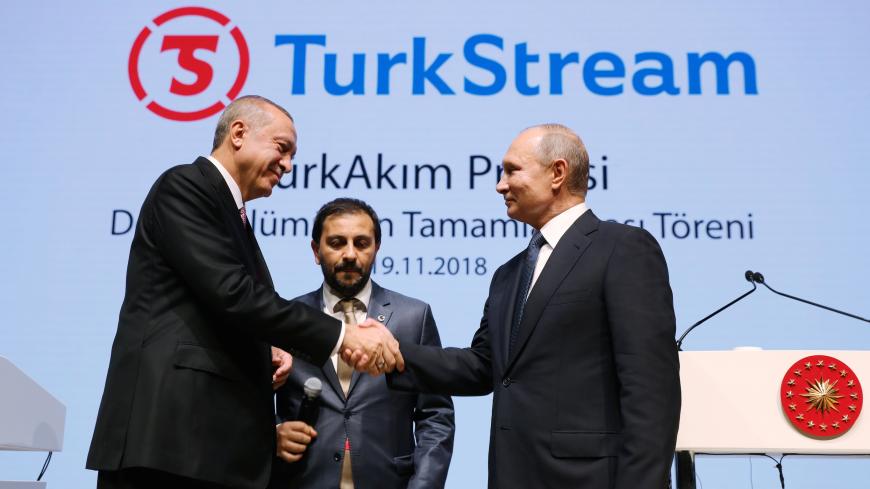 ANKARA — Turkey and Russia marked the completion of a natural gas pipeline under the Black Sea with a short ceremony in Istanbul Monday attended by their presidents.

“TurkStream is a historic project and we put in a lot of effort to realize it,” President Recep Tayyip Erdogan said of the twin pipelines that run 930 kilometers (580 miles) from the Russian port of Anapa to the coastal village of Kiyikoy in northwest Turkey. When the onshore work is completed by the end of next year, the pipelines will deliver 31.5 billion cubic meters of natural gas per year.

At a time when US President Donald Trump is scolding European countries for their dependency on Russian energy, Turkey has no qualms about increasing its purchase of natural gas from its big neighbor to the north.

“Countries’ decisions on how to obtain natural gas according to their circumstances must be respected,” Erdogan said in a clear reference to Trump. “Pressure, which violates sovereign rights and prevents states from serving their citizens, will benefit no one.”

Turkish Energy Minister Fatih Donmez told the audience in the Istanbul Congress Center that the one pipeline will deliver 15.75 billion cubic meters for Turkey’s own consumption. The other will deliver an equal amount to customers in the Balkans and further afield.

“The gas coming from the first pipeline can provide for the consumption of 15 million houses per year,” Donmez said. “We used to get gas via Russia, Ukraine, Romania and Bulgaria. Sometimes we had technical problems on the way but now, with the new pipeline, the distance will be shorter and we do not expect to have any technical difficulties with the supply,” the minister added.

After making short speeches in which they complimented each other, Erdogan and Russian President Vladimir Putin stood together on the auditorium stage and spoke via video link to the Turkish and Russian chief engineers in the control room where the pipelines come ashore in Kiyikoy. The next stage of the project is to build the overland pipelines to Luleburgaz, a town 65 kilometers (41 miles) to the southwest.

In Luleburgaz, the Turkish pipeline will be connected to the national grid, while the other pipeline will proceed either west to Greece or northwest to Bulgaria.

The route of the extension has not yet been determined, and it is the decision of the Russian corporate supplier Gazprom. On Monday, Putin said that after Luleburgaz, the second pipeline would go to “east and southern Europe.”

Putin announced that Russia would build TurkStream after a summit in Ankara in 2014. Gazprom began construction in May last year. The project followed years of tension between Moscow and Kiev over supplies of natural gas to western Europe via Ukraine.

Russian supplies amounted to 51.8% of Turkey’s total imports of natural gas in 2017, according to the official Anadolu Agency. It is unclear as to how much this percentage will rise when the first TurkStream pipeline comes online as it will replace an existing pipeline.

Separately on Monday, a pro-Erdogan columnist in the mainstream Hurriyet newspaper published another purported account, captured by Turkish intelligence, of what happened to Washington Post journalist Jamal Khashoggi in the Saudi Consulate in Istanbul Oct. 2.

Khashoggi, a critic of the Saudi government who went into exile last year, had gone to the consulate to collect a document necessary for his pending marriage to a Turkish woman. He was never seen again. After 18 days of denial, the Riyadh government admitted that Khashoggi had been killed in what it described as a botched operation intended to bring him back to Saudi Arabia.

The columnist, Abdulkadir Selvi, said a recording of Khashoggi’s interrogation revealed his interlocutors had demanded that he send a message to his son Salah in Saudi Arabia. Selvi claimed the interrogators told Khashoggi to send the message, “otherwise we will take you to Saudi Arabia.”

Selvi did not reveal how he came to know the contents of the recording, but he is known for his extensive government contacts. He speculated the interrogators wanted Salah Khashoggi to receive a message because they planned to kill his father and they wanted his family to believe that Jamal had not been harmed in the consulate.

Khashoggi refused to send the message in an exchange that became a shouting match. His interrogators put a bag over his head and strangled him, Selvi wrote.

Numerous accounts of what Turkish intelligence recorded in the consulate have been published. Turkey says it has given copies or transcripts of the recordings to several Western governments, including the United States, Britain, France and Germany. But it has not released any recordings to the media. Turkish Foreign Minister Mevlut Cavusoglu has said Turkey would release the whole file once its prosecutors had finished their investigation.