Is Turkish Stream a pipe dream?

Turkey and Russia appear keen on the Turkish Stream pipeline project, setting aside differences, but analysts suggest there is more political than economic logic involved. 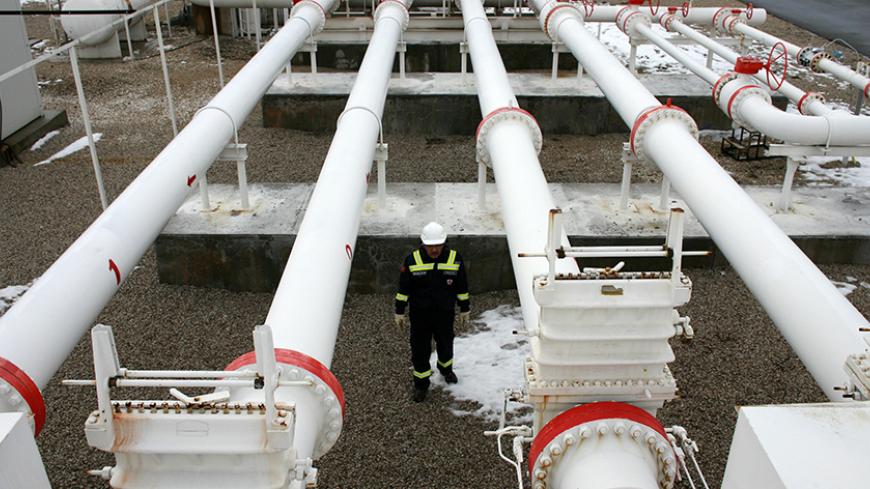 Turkish-Russia ties were strained in an unprecedented manner recently after President Vladimir Putin gave strong support to the widespread belief that the Armenian massacres during World War I were genocide, which Turkey officially rejects, and attended the commemorations in Yerevan to mark the centenary of the event.

Ankara responded angrily by listing Russian atrocities in Ukraine, Caucasus and Central Asia, while President Recep Tayyip Erdogan turned down an invitation to attend the Victory Day Parade in Moscow to mark the 70th anniversary of the defeat of Nazi Germany.

Meanwhile, reports have appeared in the Turkish media suggesting that Ankara had cooled toward the so-called Turkish Stream pipeline project between the two countries, which is expected to deliver vast amounts of Russian natural gas when completed.

Developments are, nevertheless, proving again that despite differences the two countries have on regional issues such as Ukraine, Crimea and Syria, and the angry remarks they may exchange over sensitive issues such as the Armenian question, it is business as usual in terms of economic cooperation, particularly in the strategic energy field.

Putin announced in early December during his visit to Ankara for the fourth meeting of the High Level Cooperation Council that he was scrapping the pipeline project that would have carried Russian gas to Europe via Bulgaria, and diverting it instead to Turkey, from where it could reach Greece and then Europe.

Putin’s “gift” to Turkey came after the European Commission objected to the South Stream pipeline that would have gone through European Union member state Bulgaria, which submitted to EU pressures and cooled toward the project. It also came at a time when Moscow’s ties with the West, which has slapped sanctions on Russia over Ukraine, are strained.

Speculation among energy industry sources suggested at the time that Moscow was acting impulsively and that the "Turkish Stream" pipeline, the name given to the project announced by Putin in Ankara, was not feasible.

Alexei Miller, the chairman of the management committee of the Russian gas company Gazprom, was in Ankara on May 7 for talks with Energy Minister Taner Yildiz and officials from the Turkish pipeline company BOTAS.

“Agreement was reached on the commencement of operation and gas supply via 'Turkish Stream' in December 2016,” Miller said in a statement after his talks.

The agency also quoted a Turkish official who said Gazprom had only started building the line for the 16 billion cubic meters of gas for Turkey’s domestic consumption, but has not begun the construction of the other three lines that will carry gas to Europe. It said it was not clear when this construction would start.

The United States is reportedly pressurizing Greece to refrain from participating in this project by acting as a conduit to Europe for Russian gas. State Department envoy Amos Hochstein was in Athens on May 8, a day after Miller’s talks in Ankara, trying to dissuade Greek officials from accepting a Russian proposed pipeline to connect with the Turkish Stream pipeline.

Talking to diplomatic correspondents in Ankara, John Bass, the US ambassador to Turkey, also reflected Washington’s displeasure over the Turkish Stream pipeline project. He indicated that oil and gas should not be manipulated to increase political pressure on individual countries.

“Our approach to South Stream and our approach to any possible successor pipelines that Gazprom seeks to negotiate will be viewed very much through that prism and from that fundamental principle,” Bass said. He added, “We do not want to see development of gas infrastructure in Europe that increases the dependence of individual countries on one sole supplier."

Moscow is reportedly countering US pressures by wooing Athens, which is in the throes of an economic meltdown, with the promise of $5 billion against future profits from the pipeline to be built in that country.

Meanwhile, Greek Prime Minister Alexis Tsipras and Putin discussed energy cooperation in a telephone conversation on May 7. Putin reportedly expressed Moscow’s readiness to finance a Greek company that will participate in the construction of a pipeline in that country to carry gas to Europe.

“If Putin can't resolve his problems with the EU, there is no European market for him for the gas Russia sends via Turkish Stream, the overwhelming bulk of which is supposed to be delivered to Europe,” Pamir told Al-Monitor. Pamir sees the Turkish Stream pipeline project as it stands today more in a political light than an economic one.

He said, “Putin is trying to show the West that he is not without alternatives to the route over Bulgaria that the EU opposed. As for Turkey, it wants to conclude an intergovernmental agreement with Russia for this project before the June 7 general elections to impress the electorate."

Pamir added that all the talk of making Turkey an energy hub in terms of natural gas also rings hollow since it is not clear what re-export rights Ankara has secured from Moscow for this hub to be profitable for Turkey.

Pamir, who indicated that Turkey currently does not have anything near the storage capacity for it to become such a hub, also sounded a warning. He suggested that if Moscow overcame its differences with the EU in the near future there is nothing stopping it from scrapping the Turkish Stream pipeline project as it was originally proposed.

Government sources in Ankara consider Pamir’s views as partisan because of his CHP affiliation, but the main points he makes are shared by independent experts. Kerim Has, from the Ankara-based International Strategic Research Organization (USAK), indicates that Turkish Stream is not just a commercial venture but a project with political consequences.

He cautions, however, that the sides have not yet signed a binding agreement concerning this venture, pointing out that there is only a memorandum of understanding between Gazprom and BOTAS.

“For Turkish Stream to be constructed there is the need for an EU decision on the construction of the interconnected lines, especially in Southeastern Europe,” Has told Al-Monitor. He said there was as yet no agreement between Russia and Greece, and that the declaration on this topic, signed by the foreign ministers of Turkey, Greece, Hungary, Serbia and Macedonia, was nonbinding.

Echoing Pamir, Has also underlined that important particulars such as the price of the gas to be delivered through Turkish Stream had yet to be negotiated and finalized between Turkey and Russia before this project can finally go ahead.

While Ankara and Moscow are keen to reflect a positive outlook concerning this project — mostly, it appears, for political rather than economic reasons at this stage — serious doubts linger about its feasibility, which make it unclear if the undertaking will materialize or remain a pipe dream.