Russia’s political difficulties with the United States and Europe provide what appears at first sight to be a windfall for Turkey. 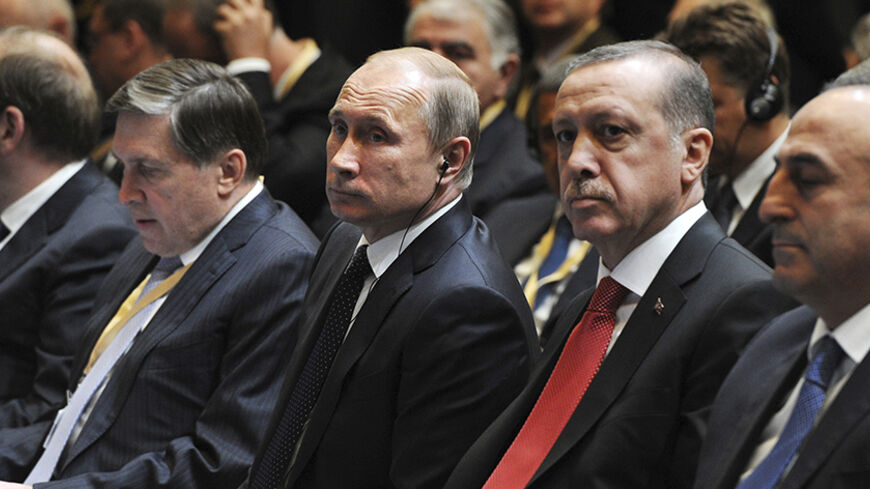 Turkey and Russia may be on different pages on issues like Syria and Crimea, but Russian President Vladimir Putin appears to be successful in opening up the “new horizons” in ties between the two countries that he promised prior to his recent visit to Ankara.

The international isolation in which the two countries increasingly find themselves over a host of issues is also pushing Moscow and Ankara closer. The personal chemistry between Turkish President Recep Tayyip Erdogan and Putin is another contributing factor.

The two leaders have similar attitudes toward democracy and freedom, compounded by their shared suspicion — bordering on enmity at times — of the United States and Europe. They have made it more than apparent in recent speeches that they have serious axes to grind with the West.

Turkish-Russia ties took an unexpected turn during Putin’s one-day visit to Ankara for the fourth meeting of the High Level Cooperation Council, which was established in May 2010, and which once again appeared more like a joint Cabinet meeting with no fewer than 10 ministers on either side of the table.

The main topic during the official talks concerned the target of $100 billion in bilateral trade by 2020. The unexpected surprise, however, came when Putin declared that they were scrapping the $22 billion South Stream pipeline project for carrying Russian gas to Europe over Bulgaria, and would favor a pipeline to Turkey instead.

During his news conference with Erdogan, Putin cited the EU’s opposition to South Stream and EU member Bulgaria’s decision to opt out of the project, saying Russia could not go ahead with this pipeline under these circumstances.

Putin said they had agreed that the capacity of the existing Blue Stream pipeline between Turkey and Russia would be expanded by Gazprom, the Russian natural gas company, to meet Turkey’s growing energy demand. He also announced that the gas supplied to the Turkish market would be increased by 3 billion cubic meters.

“Given Turkey’s growing demand, we are ready to not only expand the Blue Stream pipeline but also build another pipeline system to cover the growing needs of the Turkish economy,” Putin said.

“And if it is deemed expedient, we can build an additional gas hub for the South European consumers on Turkish territory, near the border with Greece,” he added. If realized, this could turn Turkey into a main conduit for Russian gas to Europe in the future.

The crisis between the West and Russia over Ukraine appears to have resulted in a windfall for Turkey, showing once again that its delicate geopolitical place on the map provides advantages as much as risks.

The New York Times referred to Moscow’s decision to scrap the South Stream project and redirect it to Turkey as a “rare diplomatic defeat for Mr. Putin” and a “rare victory for the European Union and the Obama administration,” going on to say that “if there was one winner it was Turkey.”

Ankara appears a double winner because Putin also announced, during his press conference with Erdogan, a 6% reduction as of Jan. 1 in the price of gas sold to Turkey. This is highly welcome news for Prime Minister Ahmet Davutoglu, given that the reduction will come in the middle of winter and help reduce household heating expenses.

There are analysts who argue that the international drop in oil prices will also reduce the cost of oil imports by Turkey from Russia and help Ankara reduce its current account deficit and inflation rate. Turkish opinion, however, is mixed as to whether Turkey is indeed a winner here, even though it may appear to be so at first glance.

Necdet Pamir, a leading Turkish energy expert and occasional contributor to Al-Monitor, who also heads the energy commission of the opposition Republican People's Party, is among the skeptics. Pamir underlined that $25 billion of the current $32 billion in bilateral trade between the two countries represented imports by Turkey from Russia, the bulk of which covered gas, oil and coal purchases.

“This is not dependence on Russia for energy but overdependence. We are dependent up to our necks and now there are plans to increase this even more, including in the field of nuclear energy. This does not sound very rational,” Pamir told Al-Monitor.

Ankara and Moscow have concluded agreements for the construction by Russia of a nuclear power plant in Turkey, a topic also referred to by Putin during his news conference in Ankara.

Pamir also questioned whether Putin’s announcement of the 6% reduction in the price of gas sold to Turkey was such a great favor, given that Moscow is already selling gas to Europe at a unit price which is $10 less than the price of gas it is selling to Turkey.

Pamir went on to indicate that despite the deep political differences Ankara and Moscow had over regional issues, it was an important political message, by means of these economic projects, that Putin and Erdogan were trying to give.

“Russia is in a corner in its relations with the West. Turkey is isolated over Syria, Egypt and its support for the Muslim Brotherhood. Erdogan and Putin are merely signaling to their publics that they are not alone and have important friends with who they are continuing to do business,” Pamir said.

Suat Taspinar, a Moscow-based expert on Turkish-Russian ties, and editor of TurkRus.com, also believes that Putin and Erdogan are essentially signaling that they are moving ahead with their strategic cooperation in spite of Western efforts to undermine it.

In an article for the BBC’s Turkish service, published on the day of Putin’s visit to Turkey, Taspinar said Moscow appreciated Ankara’s refusal to comply with Western sanctions against Russia over Ukraine and saw this as a “welcome breach in the wall.”

“It is also possible to see a shared stance in Putin and Erdogan’s continually increasing anti-Western rhetoric,” Taspinar wrote, arguing that Western pressures against Russia and Turkey’s differences with the West over a host of issues appear set to bring the two leaders even closer in the future.

As matters stand, it appears as if Turkey has much better ties today with Russia, despite the serious political differences the two countries have, than it does with its NATO allies, starting with the United States.

Erdogan and Putin are united in the belief that the West is out to ultimately undermine and destroy their countries. During his presidential address to the Federal Assembly on Dec. 4, Putin said the West wanted to dismember Russia the way it had done with Yugoslavia.

Using some of his strongest language ever, Putin said they would resist this the way they had resisted “Hitler with his people-hating ideas, who set out to destroy Russia and push us back beyond the Urals.” He said everyone should remember how that attempt ended.

Erdogan, in a similar vein, has accused the West of being behind the anti-government riots, which started with the Gezi Park protests in 2013, to topple the Justice and Development Party government and undermine Turkey’s progress.

He raised eyebrows again on Nov. 27 with an address to the Standing Committee for Economic and Commercial Cooperation of the Organization of Islamic Cooperation in Istanbul with remarks targeting the West.

“Outsiders like the oil, the gold and the diamonds of the Islamic geography. Believe me they do not like us. Outsiders who appear to us as friends like to see our children die,” Erdogan said.

With such views being expressed at the highest level on both sides, it is clear that Erdogan’s Turkey and Putin’s Russia will continue developing ties by using the highly fruitful economic dimension, while making sure to keep political differences on the back burner.