Ankara is not prepared to spoil ties with Russia over Ukraine. 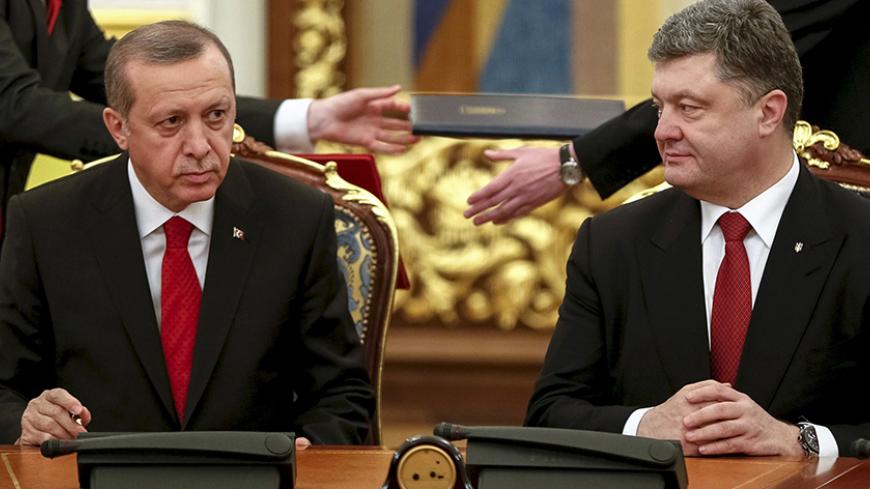 Turkish President Recep Tayyip Erdogan was in Ukraine on March 20 for a day of official talks with President Petro Poroshenko against the backdrop of the Ukrainian crisis the West and Russia are currently embroiled in. Erdogan’s visit was billed as the fourth meeting of the High Level Cooperation Council set up in 2011 to promote political and economic ties between the two countries.

Erdogan’s carefully choreographed balancing act in Kiev, however, had much more to do with the Turkey’s delicate ties with Russia than it did with any considerations about potential Western sensitivity. There have been grumblings in Western capitals because Turkey is not toeing the line on Ukraine, by refusing to support Western sanctions against Moscow, despite being a key NATO ally.

Ankara defends itself by pointing to its refusal to accept Russia’s fait accompli in Crimea, and stressing the importance it gives to Ukraine’s territorial integrity. It has, however, maintained what amounts to a relatively neutral position by refusing to get actively dragged into the Ukrainian crisis.

The balancing act Turkey has been maintaining between Russia and Ukraine is not only based on geostrategic considerations but also has to do with its vast economic interest in both countries worth tens of billions of dollars in trade and contracting, not to mention the energy sector.

The lack of official statements and the scant media coverage in Europe and the US clearly suggest that Erdogan’s visit was followed more closely in Moscow than it was in the West, where it appears governments are resigned to the fact that there will be little input from Ankara to increase the pressure on Russia over Ukraine.

It was also noteworthy that Erdogan held a 30-minute phone conversation with President Vladimir Putin on March 17, a few days before he traveled to Kiev, during which they reportedly discussed Ukraine.

A Western diplomat told Al-Monitor, on condition of anonymity due to his sensitive position, that Erdogan must have assured Putin during this conversation that he would not be pulling any unexpected punches in Kiev other than repeating Turkey’s known views about the Ukrainian crisis. Moscow has learned to live with these views, which ultimately lack any teeth.

“It is likely that not everyone in Moscow was happy about Erdogan’s visit to Ukraine. But not everyone in Ankara was happy about Putin’s recent visit to Cairo,” a source close to the government, who wished to remain unnamed because he is not authorized to comment on policy matters, told Al-Monitor. “But we have an understanding and this ensures that both sides keep their points of dissatisfaction to themselves,” he added.

Reuters quoted an unnamed Turkish government official ahead of Erdogan’s talks with Poroshenko who said: “Nobody should expect from this visit a step from Turkey that could strain ties with Russia.”

Other than the Ukrainian crisis, there are significant political disagreements between Ankara and Moscow, most notably over Syria, which under normal circumstances should have strained Turkish-Russia ties, but which have not, leaving the two countries forging further ties.

Habibe Ozdal of the Turkish International Strategic Research Organization (USAK) indicates that the upward trend in ties between Ankara and Moscow, despite differences over Syria and Ukraine, is the result of “compartmentalization.”

“The nature of their current bilateral relations can be conceptualized as the ‘compartmentalization’ of negative issues in order to focus on the positive aspects. This strategy enables bilateral economic and socio-political ties to flourish, whilst also allowing Turkish-Russian relations to weather the storm over Ukraine with minimal damage,” Ozdal said in an article for the European Leadership Network.

Erdogan nevertheless struck the right chords for Ukraine while in Kiev, clearly aware he had to do this as part of his delicate balancing act. During his press conference with Poroshenko after their talks, he said Turkey was ready to further develop “the strategic partnership” between the two countries.

“Including Crimea, we have always expressed our support on every platform for Ukraine’s independence and territorial integrity. We also consider Ukraine’s desire to develop its ties with European institutions to be legitimate and we support it,” he added, also giving Ankara’s support to the cease-fire brokered in February by Germany and France in Minsk.

In order to show that he did not come to Kiev empty-handed, Erdogan also announced that Turkey was offering a $50 million loan to Ukraine in addition to which it would also provide $10 million in humanitarian aid.

Erdogan was also aware of the other balancing act he had to do in Kiev, this time between the Ukrainian authorities and Crimean Tatars, who are related to Turks. “We also desire the continuation of Ukraine’s stance concerning the protection of ethnic and minority rights, especially of the Crimean Tatar Turks, who have shown their loyalty to their country during this crisis,” Erdogan said.

The Crimean Tatars, while continuing to look for support from Turkey — not just in Ukraine, which has not always been a friendly country toward them, but also against Russia on the Crimean peninsula — are unlikely to have listened to Erdogan’s words with great expectations.

Ankara has not gone beyond expressing concern over the fate of the Tatars, and has not made this an issue of any sort in its ties with Russia. Turkey’s larger interests with Ukraine and Russia have tied its hands in this respect.

Suat Kiniklioglu, the director of The Center for Strategic Communication (STRATIM), an Ankara-based influential think tank, and a columnist for Today’s Zaman, says the intense public concentration on domestic politics in Turkey is also working against the Crimean Tatars.

“What happens to Ukraine and Crimea is of utmost importance to Turkey. Unfortunately, Turkey is fully consumed by its own internal polarization and has little energy left for Ukraine, Crimea and our ethnic brethren, the Crimean Tatars,” Kiniklioglu wrote prior to Erdogan’s Ukrainian visit.

“These days, Turkey is fatigued by overextension in Syria and the Middle East in general. The public mood is not favorable for Turkey lending more support to its ethnic brethren abroad. The Turkish government has pivoted Turkey so much toward the south that few are willing to entertain the important issue of the Crimean Tatars,” he added.

Erdogan’s remarks in Kiev, which contained nothing unexpected, are unlikely to have perturbed Moscow much. Russian officials must have also noted Erdogan’s defense of the gas pipeline project over Turkey that Putin announced during his visit to Ankara in December 2014.

The cancellation by Putin of the South Stream pipeline project, which would have supplied gas to Europe via Bulgaria, and his favoring a pipeline through Turkey had caught everyone by surprise and was considered a major gift to Ankara.

“They came to us with this offer and we found it reasonable,” Erdogan told reporters in Kiev in response to a question on the topic. He added that Russia was the main country supplying natural gas to Turkey. In saying this he appeared to be underlining why no one should expect Ankara to spoil its ties with Moscow over Ukraine, or over any other regional crisis.