The Justice and Development Party introduces a vague morality clause for the naturalization of foreign spouses to impose its own definition of marriage. 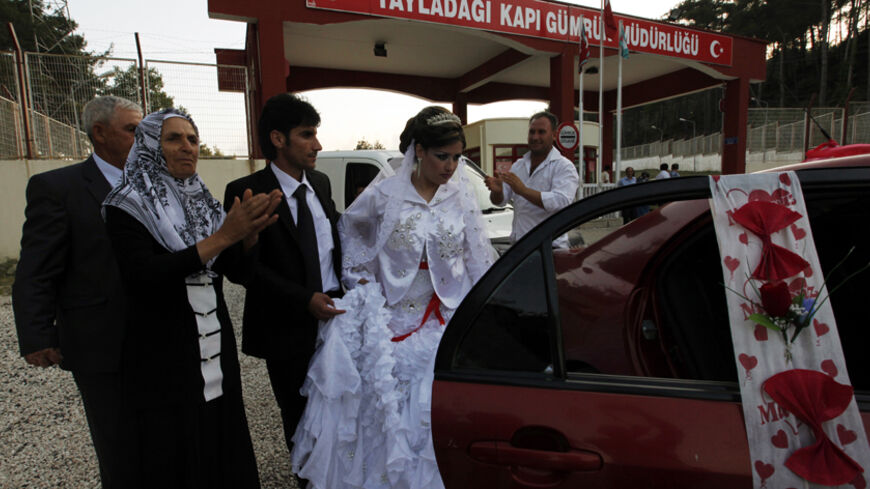 Syrian bride Reme and her Turkish groom, Rasim Yuce, leave the Turkish side of the Yayladagi border gate between Turkey and Syria in Hatay province for their wedding, June 25, 2011. - REUTERS/Umit Bektas

On Nov. 24, the Justice and Development Party (AKP) submitted an omnibus bill to the Turkish parliament referred to as the “Domestic Security Package.” It was labeled in newspapers as the “Super Omnibus Bill,” since it introduced changes in 19 different areas. Many news media outlets focused on a section that introduced changes for the naturalization of foreign spouses.

The headline from Diken news outlet was “Ivan Watson’s Turkish Citizenship No Longer Possible! A Morality Clause Being Introduced for Foreign Spouses.” Although Watson, CNN’s Istanbul correspondent, has not applied to acquire Turkish citizenship, news outlets referred to him to make the point that for any foreigner arrested, naturalization could be impossible. The proposed omnibus bill — which is likely to be passed with few or no amendments, given the track record of the AKP administration — has initiated a public debate about what should be the criteria to acquire Turkish citizenship.

Barbara Pusch, 2014-15 Mercator-IPC fellow, argued in her column for the T24 news network: “The proposed changes to the law are much worse than what made the headlines in Turkey. In 2003, the law was changed to discourage fake marriages. But now, the lawmakers are not just investigating the authenticity of marriage, but also are scrutinizing the morality. What exactly the public morality means, no one knows yet. Would the beer that the foreign spouse consumed the night before, or a miniskirt worn out in public be against the public morality? Maybe the law only would target the men and women engaged in prostitution and other paid sexual work. Whatever the lawmakers were thinking, the results can be devastating. There is no explanation about what sort of criteria would be used to evaluate morality.”

Pusch’s observations were confirmed by the news, which mainly focused on foreign brides. Even though the law has the same requirements for both grooms and brides, we see that most of the foreign spouses in Turkey are brides. For instance, in 2011, 3,286 foreign grooms were recorded in Turkey and 15,164 foreign brides.

Turkey has experienced different waves of foreign brides. Particularly young women from Eastern Europe and the Russian Federation in the post-Cold War era, and recently the Syrian refugees have generated a deep suspicion in Turkish society, which suffers from high levels of xenophobia. There is a strong prejudice against Russian and Western women that their social morals are lax and they are available for premarital sex.

Serkan Ergul, a well-known attorney who focuses on citizenship and family law, told Al-Monitor, “There have already been stringent rules on the naturalization process since 2003. For instance, the cohabitation rule. How it is applied in Turkey is noteworthy. If your spouse has to travel due to work abroad or out of town and this is reported, the chances of approval are lowered. One of my clients, a Ukrainian, applied for naturalization, for instance. During this legal process, her husband had a serious traffic accident. They were living in Antalya — a Mediterranean city known for its popularity among Russian tourists — but he had to be transferred to an intensive care unit in another city. During that time the naturalization commission, which was still in Antalya, told my client, “A woman’s residence is with her husband, so we cannot accept your application while you are not in the same city with your husband.” The husband was in a different city, but he was in a coma. He did not respond to treatment and passed away. Our court case is still not over. This is just one example to see how the Turkish mentality can be reflected to the spirit of the law.”

Ergul was concerned about the morality clause. He said, “This new condition is open-ended. No one can gauge how far it can be taken. However, to deny citizenship arbitrarily, such as with the excuse of a miniskirt, is against the international agreements Turkey has ratified. So if this omnibus bill is approved, and the naturalization law is changed to include the morality condition, then we will most likely witness the legal process be prolonged, and applicants will incur more financial costs.”

As an attorney, Ergul posed a difficult question to the lawmakers: “In addition, public morals are culture- and time-dependent. We must ask what is a fair expectation from a foreigner who is from a different ethnic, religious and cultural background. If the shoe is on the other foot, what if other countries expect Turkish nationals to match their public morals to naturalize, if a Catholic country expected Turkish nationals to follow and adopt their public morals, would that be welcome in Turkey?” All attorneys Al-Monitor contacted agreed that the vagueness must be clarified by stating clear criteria, which can be proven with evidence in a court of law.

So are the fears of pundits that foreign brides will be ostracized further especially if their public morals do not satisfy the administration? A quick look at Turkish popular culture provides a bleak picture. For instance, a “Bachelor”-genre TV show, titled “Foreign Bride” aired in 2009. Some of the dialogue from the show is eye-opening. A foreign bride-to-be asks one of the prospective Turkish grooms: “Why do you want to marry a foreigner?” Groom-to-be replies: “Well, I think the Turkish girls do not appreciate a good man, and I had a few relationships with foreign girls, I was happy.” Then the young woman inquires further: “Why did you not marry one of those girls then?” The groom-to-be rests his case: “Well, they were seasonal affairs.”

A similar attitude is observed toward Syrian women who are in Turkey as refugees. Several young women and girls enter into official or unofficial marriages of convenience in Turkey. Turkish women are particularly distraught that Syrian girls brought into their homes with the excuse of a “helping hand for housework” promptly turn into second wives (polygamy is illegal in Turkey and second wives have no legal rights). One bumper sticker reading, “If you say no, there are plenty of Syrians around,” has been circulating on social media, being cherished by some and scolded by others.

Perhaps the question why the AKP wants to introduce such an ambiguous bill is best answered by a waiter in his mid-30s, at a boutique hotel in Istanbul. He told Al-Monitor, “Good morals are essential and the state should guard the morality of the youth. Now, I support marriages with foreign girls. My older brother took a Moldavian wife, and we had doubts because, you know, she was not Muslim. She converted to Islam and is an obedient wife now. My brother found one with good morals, but if she was rotten then I think the state should not approve that marriage and protect the Turkish youth.”

Intriguingly, for those who define what good morals are so promptly, the law may be easy to comprehend: As long as a foreign spouse is not "rotten," they are welcome to Turkish citizenship!