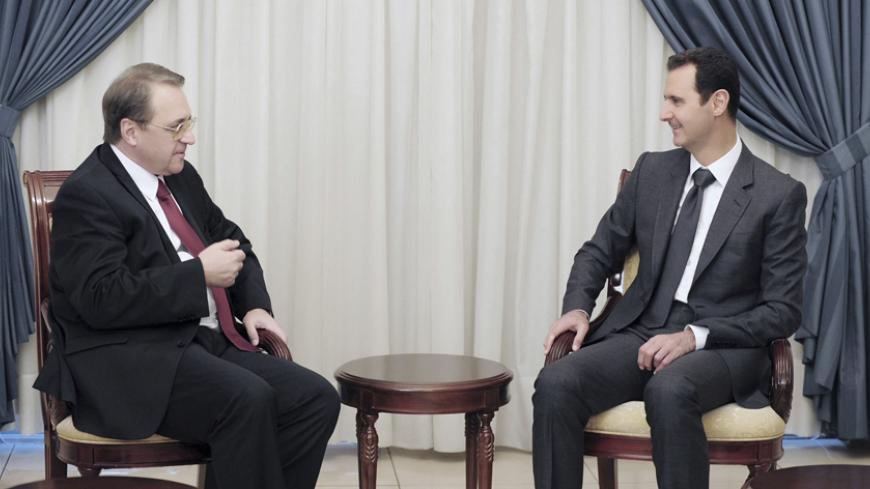 Russian Deputy Foreign Minister Mikhail Bogdanov’s visit to Damascus on Dec. 10-11 drew the attention of many. After the Russian official met with Syrian President Bashar al-Assad, Damascus issued an official statement about the meeting, stating that Assad stressed, “Russia has always stood by the Syrian people and proved that it supports people’s right to self-determination and respects the sovereignty of states and international laws.” Moreover, Assad also said, “Syria is confident that any Russian diplomatic action will be based on these principles, and on this basis it deals positively with the efforts exerted by Russia and aimed at finding a solution to the crisis.”

According to the same official statement, Bogdanov said after the meeting, “We always discuss the bilateral relations and the situation between the two parties, and the consolidation of the future relations between our two countries and our two peoples.” He added, “We tackled the crisis in Syria and the political solution, and how we can settle this matter as soon as possible. Our basic and most important mission is to fight terrorism.”

These words have multiple meanings, connotations and interpretations, which must be examined and decrypted.

The diplomatic source who accompanied Bogdanov on his visit, and was informed of his movements in Syria and its surroundings, told Al-Monitor on condition of anonymity that this visit may only be understood in light of the developments in Russian-Syrian relations in the past three months. This is due to the major change in the nature of the alliance between Damascus and Moscow since the start of the Syrian war in 2011, which was made public with the visit of a high-level economic delegation from Syria to the Russian capital in the second half of October. The Syrian delegation included mostly government officials in charge of financial and economic issues in Syria. It seemed that the purpose of the visit was mainly to get additional aid from Moscow. However, Syrian officials issued surprising statements afterward denying that Damascus had asked Moscow for any financial loans or a "line of credit."

The same diplomatic source said that this formal speech in Damascus aims to cover up that the demands of the Syrian economic delegation to Moscow included Russian loans, or a so-called line of credit of about $3 billion. However, the Russian side failed to meet this demand. This Syrian denial then arose merely to cover up the Russian rejection. Such a rejection can be justified because Moscow is dealing with other pressing priorities at the moment, including the Ukraine crisis and the global decline in the prices of energy resources; more important, Moscow must clarify some points with Damascus, not only on the level of economic aid and military logistical support, but also on the political level, in terms of the general behavior of the two allies regarding the ongoing events in Syria.

Syrians understood their ally’s request for political cooperation as a type of new condition for the continuation of economic and military aid. After this development, Syrian Foreign Minister Walid Moallem headed to Moscow, accompanied by Syrian officials from economic departments. This gave the impression that Damascus had agreed to the Russian demand. Thus, Russia entered a new phase, enjoying the ability to influence the internal Syrian position and Syria’s management of the war raging for over three years.

Then another remarkable and concurrent twist of events emerged, represented by Russia's openness to Turkey and Putin's visit to Ankara. Thus, Moscow suddenly gained ownership of most of the trump cards to deal with the parties of the Syrian crisis.

It is in this context that Bogdanov’s movement became clearer. The official came to Beirut but did not go directly to Damascus. He went to Istanbul instead to meet with some of the pillars of the Syrian opposition there. It is worth mentioning that the “Syria-Istanbul opposition” group is practically affiliated to the Muslim Brotherhood in Syria. It is the group that the former Damascus officials categorically refused to deal with. Moreover, Assad once called them “the Devil’s Brotherhood.”

Nevertheless, it was clear that the Russian diplomat succeeded in bringing about a breakthrough in the relationship between the two parties. He was able — thanks to his relationship with Ankara — to influence the Muslim Brotherhood in Syria, and in return, he was able to convince Damascus officials thanks to the economic pressure exerted by Moscow on its ally, in a secret and undeclared manner.

The same diplomatic source concluded that it is too early to judge whether the Russian effort in Syria will succeed or not. But it seems that a new phase of pressure on the regime has begun. After the pressure exerted by opponents and enemies, allies and friends have also started to exert pressure. Indeed, this is a more influential and effective practice, and was indicated by a prominent statement by Hezbollah’s deputy secretary-general, Sheikh Naim Qassem — concurrently with the beginnings of the Russian-Syria transformations in mid-October — that “everyone should expect painful compromises to reach a political solution that will save Syria from the crisis plaguing it.”

It is worth mentioning that Bogdanov himself had met Hezbollah Secretary-General Hassan Nasrallah in Beirut, before heading to Istanbul, and from there to Damascus via the Lebanese capital.

Moscow may succeed or fail in reaching a breakthrough in the Syrian impasse. Yet, in both cases, what must be monitored is whether Moscow has become a “partner” in Damascus’ management of the Syrian situation or whether it has become even more than a partner!