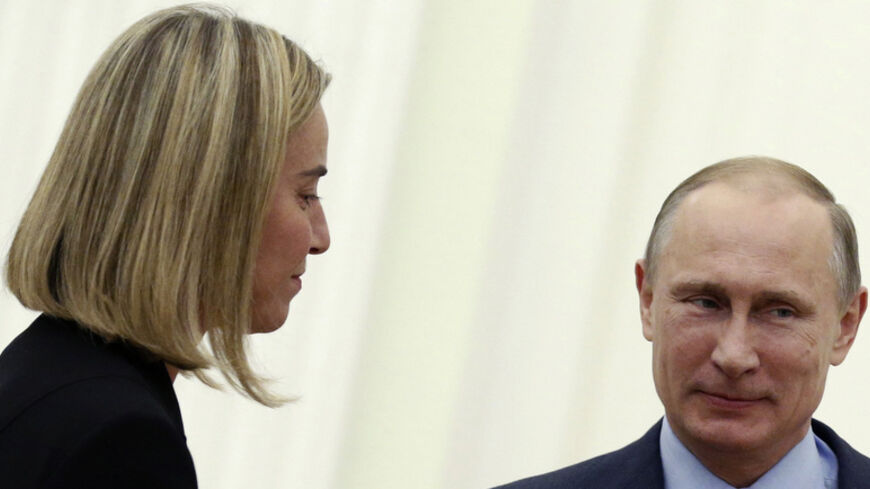 The European Union agreed last week to support UN Syria envoy Staffan de Mistura’s efforts to broker a cease-fire or “freeze” in Aleppo by providing food, medicine and other humanitarian assistance. On Dec. 15, EU High Representative for Foreign Affairs Federica Mogherini backed engagement with Russia and Iran toward a political settlement in Syria.

This column has covered the Russian diplomatic surge to jumpstart a political dialogue between the Syrian government and opposition political parties, which has complemented de Mistura’s initiative.

An Al-Monitor correspondent in Lebanon wrote that the Dec. 10-11 visit of Mikhail Bogdanov — deputy foreign minister and Russian special presidential representative for the Middle East and Africa — to Damascus may have provided Russia with an opening to push Syrian President Bashar al-Assad’s government closer to a political solution:

“Moscow must clarify some points with Damascus, not only on the level of economic aid and military logistical support but also on the political level, in terms of the general behavior of the two allies regarding the ongoing events in Syria.

“Syrians understood their ally’s request for political cooperation as a type of new condition for the continuation of economic and military aid. After this development, Syrian Foreign Minister Walid Moallem headed to Moscow, accompanied by Syrian officials from economic departments. This gave the impression that Damascus had agreed to the Russian demand. Thus, Russia entered a new phase, enjoying the ability to influence the internal Syrian position and Syria’s management of the war raging for over three years.”

Bogdanov’s regional tour included stops in Lebanon, where he met with Hezbollah leaders, perhaps including Secretary-General Hassan Nasrallah, as reported by Al-Monitor, and Turkey, where Bogdanov met with Syrian opposition leaders.

On Dec. 16, Syrian Prime Minister Wael al-Halqi told Iranian President Hassan Rouhani in Tehran that Damascus “will review any practical initiative that does not damage the country`s national sovereignty and help promote solidarity,” according to an official Iranian report of the meeting. The same day in Moscow, Bogdanov met with Abdollahian to discuss the latest on Syria and the Middle East.

In a meeting with Turkish Foreign Minister Mevlut Cavusoglu in Tehran on Dec. 17, Rouhani said that “Iran, Turkey, Syria and Iraq are four important states in the region,” and that “Tehran and Ankara have common views about the campaign against terrorism and the neighbors' territorial integrity,” according to an official Iranian press statement.

Readers of this column may recall that in February 2014 we wrote about the need for “a new, regionally based mechanism to address counterterrorism taken up by those countries most affected by the rise of forces affiliated with al-Qaeda and jihadists, including Turkey, Iraq, Jordan, Syria and Lebanon. … Over time, this dialogue could be expanded to bring in Iran and Saudi Arabia as well as other countries affected by the growing terrorist threat from Syrian-based jihadists.”

The need for such a regionally based initiative is greater than ever. US President Barack Obama called for new counterterrorism alliances in a speech in May, just weeks before the Islamic State advance into Iraq. He should return to this theme and back such a regional alignment, beginning with Turkey and Iran, as a complement to the US and coalition military actions against terrorists in Syria and Iraq.

Mustafa al-Haj reports from Damascus that the Syrian government’s loss of two military camps near Idlib to Jabhat al-Nusra may allow the al-Qaeda-linked group “and other pro-Jabhat al-Nusra Islamic battalions to advance toward Abu al-Duhur military airport and the city of Idlib, the only remaining city under the regime's control in this province. It can even lead it to advance to Hama to the south. Also, this loss is a personal defeat for Col. Suhail al-Hassan, Syrian President Bashar al-Assad’s favorite officer, and it may lead the Syrian army to give up on its ambitions to control a long road extending from Hama in the center to Aleppo in the north.”

Edward Dark writes of the radicalization that has poisoned the conflict in Aleppo and Syria in general, “The radicalization did not stop at the pulpit … the jihadists were later superseded by radical clerics — proper ideological holy men who were better versed in Islamic scripture, more coherent and more capable of convincing the skeptics and would-be recruits of their fanatical interpretation of Islam. Many of them were foreign, from all sorts of nationalities, some spoke with a thick foreign accent and clearly did not look Arab, and were possibly from the Caucasus.

“This seemed to be quite an organized affair, as these clerics would set up shop in mosques after sundown prayers and ran special classes. All were welcome to attend, and those who did were given vouchers for aid and food was handed out by special distribution centers that had started to spring up across east Aleppo. They were attempting to win over the people and more fighters to their cause through a clever campaign of providing much-needed aid to the poorest of areas, and free classes mostly focusing on religious education, but also including basics such as Arabic reading, writing and grammar. The emphasis, however, was on Quran recital and there were monetary prizes for those who would memorize chapters by heart. This would be mixed with radicalization as there would always be stories glorifying the martyrs of global jihad, including the freedom fighters of Afghanistan and Iraq.”

Hamas is seeking to bury the hatchet with Iran over Syria.

Adnan Abu Amer reports on Hamas’ recent statements of gratitude and the long-anticipated visit of Khaled Meshaal, head of the movement’s political bureau, to Iran.

“Ahmed Youssef, a senior political adviser to former Hamas Prime Minister Ismail Haniyeh, told Al-Monitor, ‘Hamas seeks to improve its relationship with Iran in light of the imposed siege and isolation. These require that the movement breaks through its isolation and siege and be present in the regional political scene, through its reconciliation with Iran.’

“A former Iranian member of parliament, who spoke on condition of anonymity, told Al-Monitor, ‘Hamas’ visit to Iran at such a high level, and the al-Qassam Brigades expressing its thanks to Tehran publicly in front of millions of people are certainly not for free, but rather in exchange for a price that Hamas has received from Iran.’

“In a telephone interview from Tehran, he added, ‘The remaining question, to which no one has an answer except for Hamas and Iran, is whether Hamas’ visit and thanks to Tehran was preceded by the transfer of financial aid or was it an Iranian condition to resume support?’”

Hamas’ overtures to Iran take place at a time when it is conducting rocket tests and attempting to restock its arsenal after last summer’s Gaza war.

Shlomi Eldar writes on the movement’s preparations for the next round of conflict: “Israeli defense officials maintained that Hamas wanted to rebuild its launching capabilities, which were seriously compromised during the summer confrontation with the Israel Defense Forces (IDF). Hamas is trying to learn lessons from the fact that hundreds of rockets fired at Israel during Operation Protective Edge caused no serious harm due to their poor accuracy on the one hand and the success of the Iron Dome missile defense system on the other. The assessment in Gaza is that to create a significant deterrence, the organization’s rocket lineup has to be drastically improved.”