US gives new priority to foreign fighters in Syria

US regional allies, including Turkey, may finally be forced to crack down on extremists in Syria. 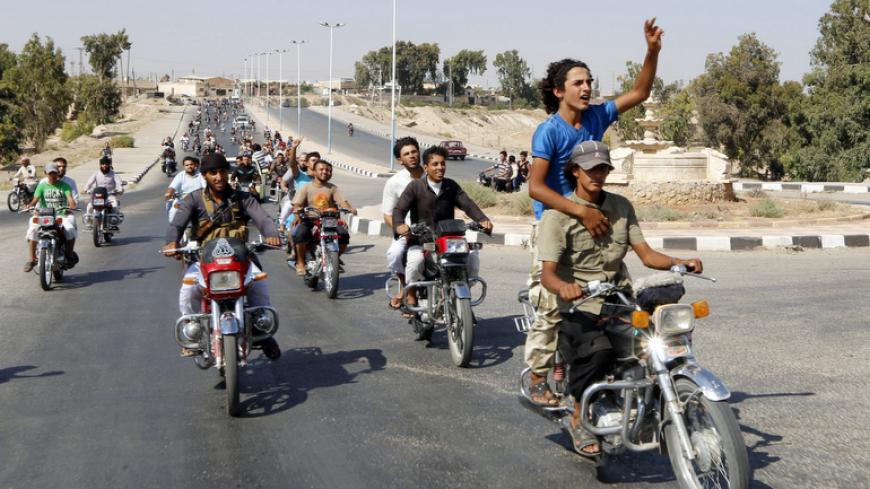 Residents of Tabaqa city and Islamic State militants tour the streets in celebration after militants took over Tabaqa air base in northeast Syria, Aug. 24, 2014. - REUTERS/Stringer

US President Barack Obama will convene a heads of state meeting at the UN Security Council in September to address the threat of foreign fighters in Syria, according to US deputy national security adviser Ben Rhodes.

Speaking at a press briefing on Aug. 22, Rhodes said the United States considers foreign fighters returning from Syria a threat to US "homeland security" and the Obama administration expects "to enlist the support of partners in the region and the international community" to contain and defeat the Islamic State (IS).

The shift to a more aggressive US strategy to combat foreign fighters puts pressure on Washington’s regional allies to show a new accountability in their actions against IS.

On Aug. 24, foreign ministers from Saudi Arabia, Qatar, the United Arab Emirates, Jordan and Egypt met in Jeddah to discuss the Syria war and the threat from extremists. The next day, Iran’s undersecretary for Arab and African affairs, Hossein-Amir Abdollahian arrived in Saudi Arabia to discuss regional matters, including Syria, with Saudi Foreign Minister Saud al-Faisal.

Ali Hashem reports that these states “have all arrived at this conclusion: Any tactical advantage they might have in a particular area does not stand up to the strategic threat of IS. Moreover, the status quo and ongoing side battles are only providing IS with opportunities to expand and become a power in the region, especially given the situation on the ground, including IS control over water and energy resources, which contributes to making it an even bigger threat to neighboring states.”

Abdulmajeed al-Buluwi writes for Al-Monitor that the stakes are high for Riyadh: These jihadist groups "pose a security and ideological threat to the Saudi political system, as they are based on the same religious sources that the Saudi state is built upon."

Turkey, in particular, could face increased scrutiny for its policies toward Syria.

Kadri Gursel blames Turkey for contributing to the growth of the jihadist threat in Syria:

“If Turkey had not opened its border with Syria in both directions to al-Qaeda-derivative Islamic State (IS), if so many fighters had not crossed the border into Syria with their guns and equipment and if this group had not used Turkey as a base, IS could not have amassed its current strength in Syria.”

Turkey is now experiencing the blowback from its Syria policy that this column warned about in January. Bunyamin Aygun, a Turkish photojournalist held captive by IS for 40 days, told Al-Monitor’s Amberin Zaman that his captors, who cursed Turkish President Recep Tayyip Erdogan and Prime Minister Ahmet Davutoglu as infidels, “claimed that if Turkey sealed the border gates that were under IS control they would hit one Turkish village after the other and trigger a civil war inside Turkey.”

President Obama’s plan to develop new counterterrorism alliances, as he outlined in a speech at the United States Military Academy on May 28, is more relevant than ever. In February, this column called for “a new, regionally based mechanism to address counterterrorism taken up by those countries most affected by the rise of forces affiliated with al-Qaeda and jihadists, including Turkey, Iraq, Jordan, Syria and Lebanon. … Over time, this dialogue could be expanded to bring in Iran and Saudi Arabia as well as other countries affected by the growing terrorist threat from Syrian-based jihadists.”

There is an all too obvious strategic rationale in recognizing that the Syrian military could be an asset in defeating IS, whose foreign fighters are now described as a threat to the US homeland. There may be a slow and quiet trend in this direction. While no one is calling for the West to embrace Syrian President Bashar al-Assad, especially given the crimes and excesses his government has carried out during the war, no one has ever accused Assad of being a threat to the US homeland, as is the case with IS, which is also a mortal enemy of the Syrian government.

An alternative policy — intensified arming of moderate Syrian opposition forces, with the intent of their defeating both the Syrian government and IS — seems not only unrealistic, but a recipe for more war, more refugees and more ungoverned spaces; in other words, a perfect setting for the further proliferation of extremists and armed groups. When advocating for regime change in Syria, some might consider what is taking place in Libya.

US Sen. Rand Paul, R-Ky., wrote this week in the Wall Street Journal: “Some now speculate Mr. Kerry and the administration might have to walk back or at least mute their critiques of Assad in the interest of defeating the Islamic State.”

In the meantime, the Syrian people are paying a terrible price for what UN High Commissioner for Refugees Antonio Guterres this week called “the biggest humanitarian emergency of our era.”

Edward Dark writes, “The very survival of the rebel movement in Aleppo hangs in the balance, with serious implications should it be replaced by the terrorist Islamic State.”

Dark adds that while residents fear an IS victory, “many of Aleppo’s residents have little sympathy for the rebels, whom they largely blame for destroying their city.”

Alawites in areas under government control are also watching the rapid advance of IS with unease.

An Al-Monitor correspondent in Syria reports that the mood is grim: “As IS and Jabhat al-Nusra move closer to Alawite areas, Alawite residents prepare for what many here see as an existential fight.”

Tensions have also flared between groups of Bedouin and Druze in Suwayda near Daraa, known as the birthplace of the revolution, which had previously been untouched by heavy fighting.

Khaled Atallah writes, “The confrontations were ignited by the Aug. 14 arrest of Bedouin leader Jamal Belaas. Bedouin groups responded on Aug. 16 by attacking a car in the area between Dama and al-Ariqah in Suwayda, which is a Bedouin zone. The car's passengers were injured and the driver was killed, activist Rami Ismail told Al-Monitor in a small cafe in the old city. Ismail said the incident prompted NDF [National Defense Forces] members to target Bedouin gatherings, and Bedouin gunmen responded by storming the Druze villages of Dama and Deir Dama, kidnapping some members of the Popular Committees and raising the banners of Jabhat al-Nusra.”

Speaking to a high-ranking member of the Israel Defense Force’s (IDF) General Staff, Ben Caspit describes an Israeli view of the situation:

“This is a totally new reality. Once upon a time, there was one address in Syria. Today, there are dozens. In order to win [in the past], you had to beat the Syrian armored divisions. And that is something that the IDF knows very well how to do. The army is built for that. Today, the story has become far more complicated, elusive, difficult and shadowy.”