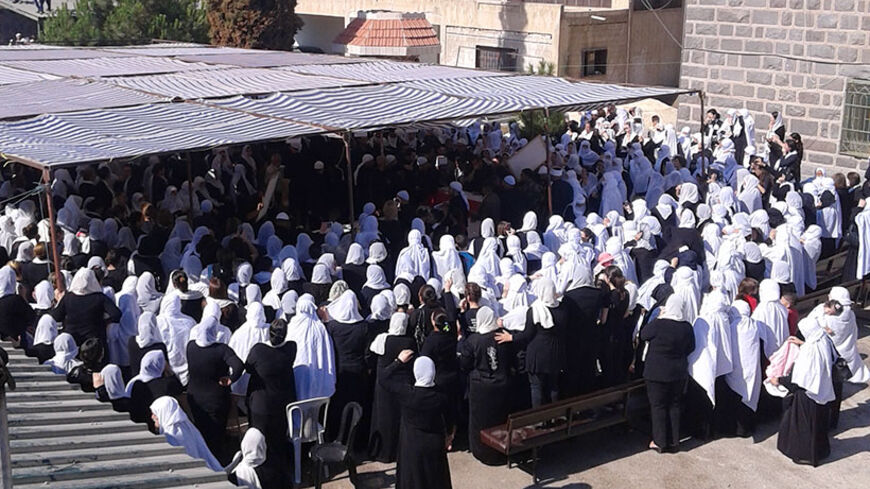 SUWAYDA, Syria — Southern Syria's Suwayda province, close to Daraa, the cradle of the protests, is no longer removed from the battles ravaging other parts of the country. In the province, over which calm had prevailed since March 2011, the village of Dama witnessed a series of clashes beginning Aug. 16 between Druze residents supported by the Popular Committees and the pro-regime National Defense Forces (NDF) and Sunni-armed Bedouin groups backed by Jabhat al-Nusra as well as other armed opposition battalions stationed in al-Lajat, which borders Baraa and Suwayda.

On the outskirts of Suwayda city, the checkpoints of the local committees and NDF search for cameras, laptops or anything else considered a threat to the authorities. They ask why visitors are there. If the answer is not convincing, they will likely take personal identity cards to check whether visitors are wanted by the authorities.

Suwayda's entrances are decorated with pictures of President Bashar al-Assad and slogans supporting the army and NDF. Only a few shops were open, as most of the city’s residents were preoccupied with the funerals of victims of the clashes with the Bedouins. Massive crowds gathered on the main road to pay their respects.

The confrontations were ignited by the Aug. 14 arrest of Bedouin leader Jamal Belaas. Bedouin groups responded on Aug. 16 by attacking a car in the area between Dama and al-Ariqah in Suwayda, which is a Bedouin zone. The car's passengers were injured and the driver was killed, activist Rami Ismail told Al-Monitor in a small cafe in the old city. Ismail said the incident prompted NDF members to target Bedouin gatherings, and Bedouin gunmen responded by storming the Druze villages of Dama and Deir Dama, kidnapping some members of the Popular Committees and raising the banners of Jabhat al-Nusra.

Al-Monitor's correspondent had to travel a bumpy road to reach the Bedouin areas, assisted by Abu Jassem, an activist from Suwayda’s small opposition. “The Bedouins only attacked the Dama area after the Popular Committees and NDF provoked them,” Jassem said. “The Popular Committees have consistently kidnapped and arrested many of us, and we remained silent. They are trying to displace us. We attacked this area because its youth are responsible for what has happened to us.”

Thousands of Bedouins live in the area, some of them in neighborhoods close to or within the city of Suwayda. Others move with their tents among the province’s villages, especially those close to Daraa province. Their presence in the region dates back to the 1920s, when they opted for a nomadic life to escape military service.

Bedouin families were driven out of the province’s villages and their houses were burned in Ariqah and Najran, all against the background of the current clashes, according to Jassem. After three Druze spiritual leaders were killed in the battle to take back Deir Dama, hundreds of Druze in Suwayda gathered in front of the Ayn al-Zaman shrine with their spiritual leaders and demanded weapons to counter the Bedouins, local residents told Al-Monitor.

Rima Fleihan, a Syrian writer and opposition activist based in Amman, said the protests calling for arms were the result of anger and fear of extremists: “The demands for armament were certainly the consequence of angry outbursts and fear of extremists, based on what has happened in the region. Some local authorities were undoubtedly behind this mobilization, but thankfully, there are wise people capable of dealing with the local community and leading it to a safe harbor. To be dragged into the fighting does not serve anyone's interest, except for [that of the] regime and extremists from both sides,” she told Al-Monitor by phone.

Fleihan said, “The events did not happen overnight. Rather, they are the consequence of many kidnappings of civilians in the villages of Suwayda, the shootings and provocations by the Popular Committees.”

The Syrian army, backed by NDF, has managed to regain control over Deir Dama following clashes with Bedouin groups and factions supporting them, according to one NDF member. During the funeral of a fellow NDF member, he told Al-Monitor, “The army managed to enter the village along with members of NDF from Suwayda on Aug. 18 at night, after the 404th Artillery Regiment paved the way for their entry and facilitated the launching of air raids by warplanes. Yet, the Deir Dama and Dama villages are still subjected to heavy mortar shelling from time to time.”

The Syrian Arab News Agency reported Aug. 17 that the Syrian army and NDF managed to counter an attack led by “terrorist groups” against the Dama village in the countryside of Suwayda.

Sheikh Abu Ibrahim, a Druze cleric who took part in the confrontations as a volunteer to protect the mountains, said the people of Suwayda will not remain silent if attacked and demanded that the regime and opposition halt the violence. “As soon as the attack on the Dama village took place, everyone raced to take up arms. Youth from Jaramana and Ashrafiyat Sahnaya near Damascus came to defend the mountain area. We cannot allow the forces of darkness to attack us. The regime shall know, before the opposition, that Suwayda will not be another Maaloula or Kassab. Stop the exploitation of bloodshed,” he told a local radio station.

Druze spiritual leaders issued a statement calling on the “Druze community to hear the voice of wisdom, to not be dragged into strife and to not listen to those who cause it, as it is worse than killing and will only lead to destruction, deaths and sabotage of decent living and the homeland.” They also warned against “attempts by terrorists and their masters, since the beginning of the war on Syria, to revive strife among the various groups of the same country, to serve the interests of the enemies of the homeland and implement a malignant colonial plan designed for the region and the country.”

Civil activists have been unable to plan an effective role to end the violence, according to civil and development activist Qusai Muqallid. He received Al-Monitor in his home, where he said that the Syrian authorities had blocked access to the Internet and disabled communication in the entire province during the clashes. On Aug. 24, Internet access was available again. “We could not do much, as restrictions were significant. But we managed to communicate with some activists in Daraa and Bedouins in an attempt to defuse strife,” he said.

Muqallid said the conflict between Druze and Bedouins has always been an instigator of strife in the southern mountain area. He said the funeral of those killed in Suwayda was not of a political nature, and the residents prevented any official body from attending.

The tension between Bedouin and Druze goes back a long way. In 2000, bloody clashes took place after a two-week dispute over grazing areas, leaving 20 dead and 200 injured. The fighting stopped only after the Syrian army intervened. With tensions high, many fear the sporadic violence here could develop into something much more dangerous.