The people of Suwayda in southern Syria were outraged when a Syrian army officer insulted the spiritual leader of the Druze community in the governorate, and high-ranking officials are trying to defuse the tension by offering apologies to the community. 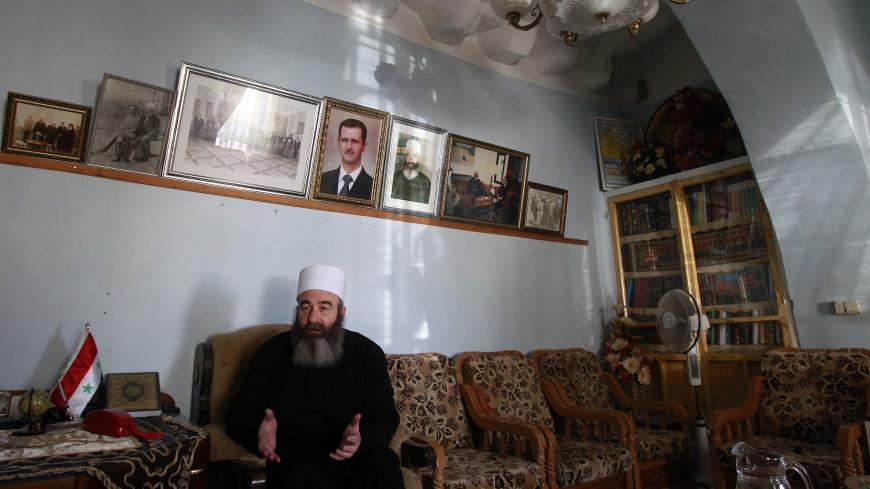 Sheikh Hikmat Hajri, a top Druze cleric, sits in his home in the southern city of Suwayda on Jan. 23, 2013. - JALAA MAREY/AFP via Getty Images

ALEPPO, Syria — During a Jan. 25 phone call to discuss the fate of Druze detainees from Suwayda held by the regime, the regional head of military intelligence for the Syrian regime, Brig. Gen. Luay al-Ali, insulted Sheikh Hikmat al-Hajri, the spiritual leader of the Druze community, prompting him to end the call. No details were provided pertaining to the nature of the insult.

The Sheikhdom of the Unitarian Druze Community in south Syria's Suwayda governorate said in a statement on Facebook, “High-ranking figures in the state offered an apology and ensured that this mistake has been mended in all its dimensions.”

“What happened happened, and fences were mended, as things should be by respecting people’s rightful demands. We hope that everyone would abide by our directives for calm and to avoid escalation and strife,” the statement added.

Tension began to escalate in the community, as people were outraged by the insult. People tore up pictures of President Bashar al-Assad and wrote anti-regime phrases and slogans against the Iranian presence in the governorate. People also took to social media to express their anger.

Several local militias in Suwayda, such as al-Fahd Forces and the Sultan Pasha al-Atrash Battalion — both established by the Druze community to fight the Islamic State — demanded an official apology from the regime, Ali's dismissal and the end of the arrests of anyone expressing criticism of the regime.

In a Jan. 26 Facebook post, al-Fahd Forces said, “An insult to His Eminence, Sheikh Hikmat al-Hajri, by an arrogant officer is an insult to all the community. Should the competent authorities fail to hold this officer accountable for his behavior, they would be considered participants in the offense. The community would then respond in kind and more. Forewarned is forearmed.”

A Druze activist from Suwayda who did not want to be named told Al-Monitor, “The village of Qanawat, where Sheikh Hikmat al-Hajri resides in the countryside of Suwayda, has had several visits from official delegations of the Assad regime. These are efforts to defuse tension and mend fences with Hajri. Among the figures that visited Hajri were the Suweida governor, the secretary of the Baath Party branch in south Syria, the police chief in the governorate and a member of the central leadership of the Baath Party, Maj. Gen. Yasser al-Shoufi.”

On Jan. 26, the Syrian regime released Siraj al-Sahnawi, a young Druze anti-regime activist from Suwayda who had been detained by regime security forces since January.

In response to the Sahnawi’s arrest, local militias in Suwayda detained an officer and members of the regime's forces in a bid to pressure authorities to release him. The tactic is a common way for militias to pressure the regime.

On Jan. 31, Assad called Hajri and promised that Ali would no longer command in Suwayda. But the Suwayda 24 news website reported Feb. 1 that Ali went to work in his office in the Daraa governorate, though its sources said that he had been ordered not to intervene in Suwayda's affairs.

During 2020, Suwayda had witnessed recurrent protests demanding the regime's ouster over their poor living conditions. The regime responded by arresting a number of activists.

Ayham Assaf, a journalist from Suwayda living in Greece, told Al-Monitor, “Assad’s apology to Hajri comes in a bid to alleviate the popular anger in the governorate, which has lately seen several protests, most recently against the candidacy of Assad for the presidency. Despite the current cautious calm, the state of discontent persists.”

“Suwayda has always been a source of concern for the Syrian regime ever since the outbreak of the Syrian revolution. The regime has tried over the years to strong-arm and punish the governorate over the increasing numbers of young men who dodged the [military] draft and the increasing protests against the poor living conditions. In May 2020, protesters called for the ouster of the regime,” Assaf added.

He went on, “Russia and Iran are always trying to increase their influence in Suwayda. Russia is trying to send a message to the international community that it is capable of controlling the situation in southern Syria and form security forces to stop the expansion of Hezbollah and Iran in anticipation of the upcoming presidential elections slated for mid-2021. This is perhaps evident in Moscow’s efforts to enlist young people who had backed [a political] settlement by joining the First Brigade of the Syrian army, provided that they serve in the southern part of the country. Russia is competing with Iran, which is also seeking to increase its influence in Suwayda by supporting the [pro-regime] National Defense Forces. Iran’s role in Daraa has declined to the benefit of Russia’s presence there.”