Local figures in Syria’s southern province of Suwayda have been considering solutions to the clashes and tension ongoing with regime affiliates in the province. 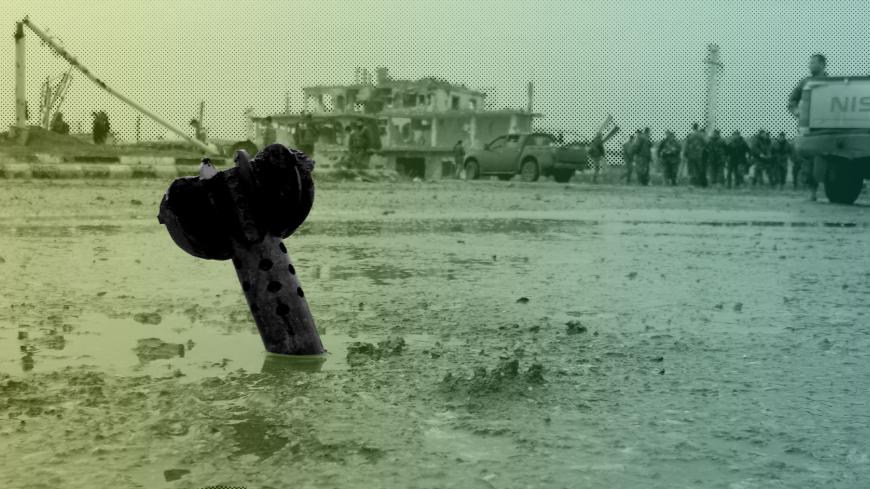 An unexploded mortar shell sticks out of the ground in front of Syrian pro-government forces standing on a street in the town of Sheikh Miskeen, west of Suwayda, Syria, Jan. 26, 2016. - STRINGER/AFP via Getty Images
Mohammad Alawad

SUWAYDA, Syria — Residents in the southern province of Suwayda have been taking to the streets since January amid popular anger, calling for improving the living conditions and loosening the security grip imposed on them by the Syrian government.  Despite initiatives promising better conditions for the province where the security situation has been relatively calm, the popular demands are far from being met, as no actual solutions to the daily crises have been proposed. In fact, the security branches affiliated with the regime have been imposing more restrictions, by arresting people and recruiting young men in their ranks and fueling the situation by ignoring the appeal of the elders to stop the arrests and kidnappings amid harsh living conditions and ongoing demonstrations.

Mohammad al-Hammadi, a journalist from Daraa who works with local newspapers, told Al-Monitor that the regime’s offensive in northern Syria to control the area and the ongoing arrest campaigns in the province of Daraa after the regime took control of it in 2018 have all affected Bashar al-Assad’s policy in Suwayda.

He noted that Assad now seeks to subjugate the province of Suwayda by imposing restrictions on its residents, especially since his control there has become less apparent lately. Assad is thus pursuing this policy to impose state prestige through a systematic blockade that brings the province back under the regime’s control with minimal losses, Hammadi added.

The Syrian regime wants to escape responsibility from the deteriorating situation in Suwayda and blame it on local factions. Chaos has thus ensued, despite elders from the area constantly demanding that the government forces play their role effectively and hold those responsible from both sides accountable. Activists on social media have reported over 20 incidents of kidnapping and detention by unknown perpetrators in February.

As different parties show reluctance to make any concessions, there are concerns the situation might further escalate in the near future, notably after regime forces arrested a number of youths on the pretext of dealing with the Israeli government and being hostile to the Syrian regime, Hammadi added.

He said the successive security violations, arrests and many cases of kidnappings and murders, in addition to the arrogant method the security branches have opted for in dealing with these conditions that locals blame them for, contributed to adding fuel to the flames.

Suleiman Murshid, an activist from the city of Salkhad in Suwayda province, told Al-Monitor that the regime forces kidnapped in February a young man from Salkhad who is a member of a local faction called Sheikh al-Karama Forces. The latter retaliated by kidnapping six officers from the Syrian army and other members of the air intelligence branch in the city after a clash inside one of the city's communications centers.

According to Murshid, Sheikh al-Karama Forces stormed one of the regime’s security headquarters on Feb. 23 after kidnapping the officers, in an attempt to find their kidnapped member and help him escape, since the regime had refused to release him or give them any information about his whereabouts.

He said that the regime forces responded to this kidnapping and armed attack against its security branch by calling in military reinforcements on Feb. 24 and vehicles carrying medium weapons, which were deployed throughout Salkhad.

Murshid pointed out that the regime forces erected checkpoints in and around the city, one of which was attacked by unknown individuals only hours after the regime forces were deployed near Tal al-Lawz, western Sarkhad. Clashes erupted but no significant losses on either side were reported on Feb. 24 hours after the military outposts were deployed in the vicinity of Sakhlad.

Sheikh al-Karama Forces published a statement on its Facebook page Feb. 23 claiming responsibility for the kidnapping of five regime officers and a soldier in response to the kidnapping of one of its members who was accused of collaborating with Israel.

In the same statement, Sheikh al-Karama Forces accused the Syrian regime of betraying its people by protecting the Israeli borders, in addition to allowing Iranian militia and Russians to get involved in the Syrian war, killing civilians and displacing them, noting that the faction will remain on full alert until its demands are fulfilled and it is ready to respond to any attack.

A media official in Sheikh al-Karama Forces told Al-Monitor on condition of anonymity that the statement clearly shows the faction’s intentions to carry out more kidnappings if the regime continues its arrests, refusing to reveal any future plans should the regime forces respond.

Speaking about solutions to the current conditions, Ryan Maarouf, editor of Suwayda 24 news website, told Al-Monitor that religious and social organizations and leaders of the local factions held a meeting Feb. 21, attended by several spectra from Suwayda to discuss the security situation and draw up a plan to reach a final solution and prevent further bloodshed and violence.

However, Maarouf said the meeting was fruitless, since tension immediately resumed and the regime forces kidnapped the Sheikh al-Karama Forces member on Feb. 23.

According to Maarouf, the meeting took place in the traditional leadership house of the Atrash family in the town of Ira, in western Suwayda, in the presence of a large number of prominent figures, in addition to senior Sheikhs al-Aql of the Druze community Yousef Jarbou and Hamoud al-Hinnawi, and the deputy bishop of Suwayda. Attendees called on the Syrian regime, represented in its departments in the province, to work on finding a solution to end the quarrel between outlaws and urging the competent authorities to disregard them. They further emphasized the need for security branches to adhere to controlling the situation and commit to achieving security and stability in the area, provided that the local community organizations support them in doing so, Maarouf added.

Maarouf concluded that the same figures had held similar meetings months ago, during which they called for a set of reforms and solutions that were not eventually implemented and chaos thus remained prevalent.