With Russia’s diplomatic base relocated from Damascus to Beirut, Moscow is refining its strategy on the Syrian crisis as the second Geneva conference nears. 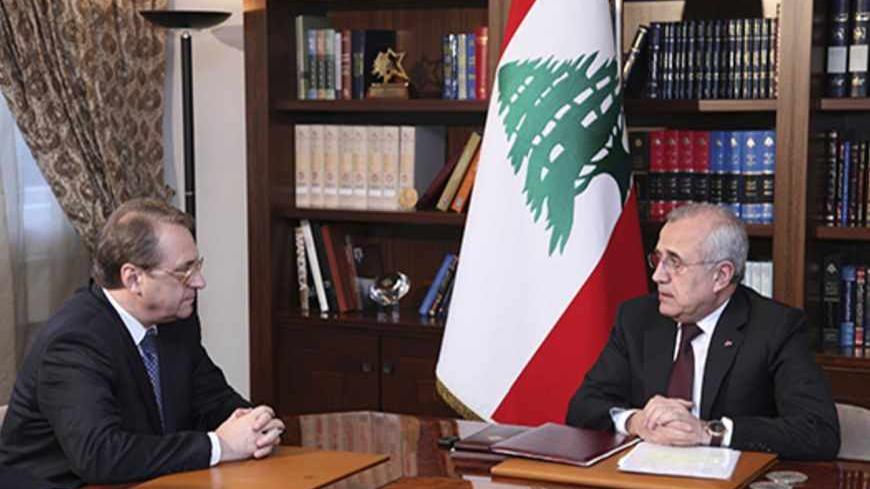 Since the visit of Russian Deputy Foreign Minister Mikhail Bogdanov to Beirut on April 26, the Russian Embassy in the Lebanese capital appears to be a crisis management group charged with solving the Syrian file or a working group preparing for the second Geneva conference. This is the case for several reasons.

Russia’s diplomats have moved from Damascus to Beirut, as have a majority of the diplomatic missions to Syria. In Beirut, the Russians have been able to communicate and interact with external parties on the Syrian crisis more than they could in Damascus. Beirut was chosen over other capitals in states neighboring Syria to be the base of Russian diplomatic work in view of historical, geographical and personal considerations.

Historically, Beirut was the base of the “czarist consul” in the Orient, as well as for other European consuls, during the Ottoman Empire and the period of the emergence of the modern Mashreq countries a century ago. Moreover, Beirut is closer to Damascus than any other neighboring capital.

Regarding personal considerations, one should first note that Bogdanov, in charge of major issues involving Syria at the Russian Ministry of Foreign Affairs, is a personal friend of the Russian ambassador to Lebanon, Alexander Sasbekean. They have been friends since the early 1970s, when they were classmates at the Institute of International Relations, also known as the diplomats’ school, affiliated with the Soviet Ministry of Foreign Affairs.

In addition, Sasbekean's only son is also a diplomat, working within Bogdanov’s Syrian team in Moscow. Thus, the Russian Embassy in Beirut plays an important role in regard to events in Syria. This role gained new impetus following Bogdanov visit to Beirut.

The Russian official tried to impress upon his guests that they have an exceptional opportunity and that they should take the initiative and seize it. He stated, “We are preparing for the Second Geneva Conference. We agreed with the Americans on the general framework of this conference. We are even involved in choosing the participants, whether from the regime or the opposition. Therefore, we say to you, be prepared to take on this role and we are ready to support you.”

Nevertheless, the Syrian opposition seemed to be reluctant and indecisive, for a number of reasons. The Syrian participants required time to consult with other members of the opposition. This left the Russians with the impression that their interlocutors either feared the reaction of the jihadist forces should they agree to take part in the second Geneva conference or that they suffered from a legitimate representation crisis, which would be exposed if they took part in a dialogue and agreed to implement the ensuing results on the ground.

It is clear that Bogdanov’s meeting with the Syrian opposition did not lead to the desired results. Hence, Russian Embassy diplomats have been turned into a work group to follow up on the mission after Bagdanov left the country.

According to reliable information provided to Al-Monitor, Ambassador Sasbekean has been holding meetings in preparation for the second Geneva conference. He has been in contact with Moscow as well as Damascus to this effect and has been requesting that his interlocutors submit proposals they deem useful to consolidate Russia’s views at the conference. In this context, a number of points have been discussed, of most importance the following:

First, there is a need to emphasize that there is no connection between the conference and the departure of Syrian President Bashar al-Assad.

Second, the conference must be followed with work regionally and locally, especially in regard to the situation of minorities in the region given the threat to them posed by  jihadists. This is necessary in supporting the Russian view on the Syrian issue, not to mention that it is part of the official rhetoric of the new Russian foreign policy. While, “Soviet Russia” considered liberation movements of people to be an integral part of the regime’s ideology and foreign policy, the “Orthodox Moscow” of today places the issue of religious minorities in this region at the core of its policy.

Third, already extensively discussed financial issues, reconstruction projects and compensation should be addressed at the second Geneva conference. The Russians appear to be interested at the moment in the official Syrian reading of the material and human losses of the past two years. This is to create some sort of balance in the upcoming international conference regarding accountability for events as well as the responsibility of other nations, at a later stage, in helping Syria out of its predicament.

Fourth, reliable sources confirmed that the Russian Embassy in Beirut has also been discussing the issue of the international parties to be invited to participate in the conference. It is possible for a number of reasons that the Russians might consider inviting Palestinian President Mahmoud Abbas to take part. First, Palestinians are involved in the events in Syria given the refugee camps there. Second, such a move could consolidate international support for Abbas’ legitimacy. Third, Syrian authorities would welcome this step as retaliation for Hamas’s stance toward the Syrian regime, given that Khaled Meshaal has adhered to the official position of the Muslim Brotherhood regarding the Syrian crisis.

Thus, whatever the outcome, the agendas or the possibility of holding an international conference to resolve the Syrian crisis, one thing is for sure: The Russians have something simmering in Beirut.