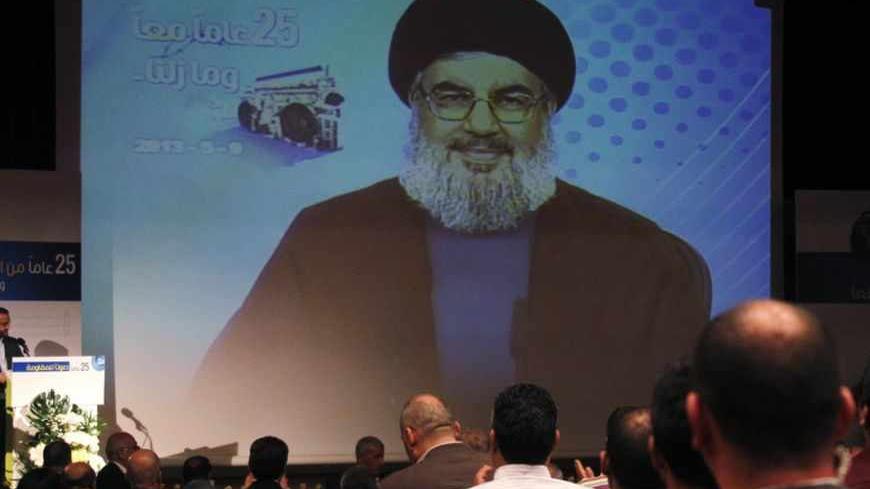 Lebanon's Hezbollah leader Sayyed Hassan Nasrallah appears onscreen during a live broadcast to his supporters at an event marking the 25th anniversary of the establishment of Al-Nour radio station, which is operated by the Hezbollah in Beirut, May 9, 2013. - REUTERS/Sharif Karim

For the second time in nine days, Hezbollah Secretary-General Hassan Nasrallah appeared in a televised speech, knowing that both appearances fall into the same political context — one that was previously discussed in this column to indicate three reasons behind the timing of the two appearances and speeches.

The previous article detailed the first reason behind the appearance of Nasrallah, which was to confirm the religious tenets and the ideological justification of Hezbollah’s stance on the Syrian situation. The second reason was directly related to the political developments in Lebanon and its neighboring regions, starting with the visit of Russian Deputy Foreign Minister Mikhail Bogdanov to Beirut on April 26 and 28. The Russian minister’s visit to the Lebanese capital after Tehran and Damascus is not without meaning. Clearly, Russia, Iran, Syria and Hezbollah have been coordinating at some level and have tackled all the regional developments and stances taken in this regard by any of the elements of this new axis.

However, amidst this coordination, the role of Lebanese leadership was attributed to Hezbollah. Two signs confirmed this idea in Beirut. For form’s sake, the Russian official ended his visit to Lebanon on the evening of April 28 with a long meeting with Nasrallah. This was the first indicator, while the second indicator that was more related to the actual content of the issue was represented by the confirmations of Russian diplomatic sources in Beirut that the Iranian officials whom Bogdanov met in Tehran only tackled the Lebanese affair from a general perspective. They expressly told him that the issue depends on Hezbollah’s stance and on Bogdanov’s meeting with him.

Meanwhile, sources in the know on the results of Bogdanov’s visit to the Lebanese capital revealed to Al-Monitor that the conversation clearly tackled the role of Russia in protecting the forces that are close to it in the region, as well as the importance of facing Washington and returning the balance to the global system in its Middle Eastern side at least. Moreover, both officials discussed the prospects of imposing the demarcation of the international spheres of influence in this region. In a clear and straightforward conversation, they brought up the different as well as matching ideological, economic, geostrategic and security-related interests of Moscow and local forces in achieving these goals.

Consequently, it seemed that Moscow, in its comprehensive attack opposing Western action on the Syrian situation and the other related situations, acknowledged the leading and exceptional role of Hezbollah.

Nasrallah’s speech, thus, carried a new and different dimension after the visit and in the wake of the developments that followed it. It is noteworthy that this direct axis of coordination has set another meeting date on the April 14 in Marrakesh, where the Russian administration is organizing a research forum about the region through one of the scholar organizations related to it. Components from this same axis have been called on to participate.

In fact, the days that separated Nasrallah’s first speech, on April 30, from his second speech on May 9 carried various other developments in Syria and confirmed the solid coordination and integration between the sides of this axis.

After the Israeli attack on Syrian targets near Damascus a few days ago, the axis took a stance of expansive alert and complementary action in terms of the roles played by the different sides.

Putin called Netanyahu, while the Iranian foreign minister arrived in Damascus after Amman. Meanwhile, Nasrallah was getting ready to give his speech. Moreover, some Syrian officials and sources close to Hezbollah confirmed to Al-Monitor that the option of attacking Israel with a conclusive war that might become an open regional one is being seriously discussed and prepared for once again.

Syrian officials told Al-Monitor that the Israeli raid was coordinated among some armed opposition forces in Syria.

Followers of this affair do not separate this specific development from the third reason behind the timing of Nasrallah’s two speeches. This time, the reason is related to the military developments. The advancement of the Syrian regime’s army on several regions in the past two weeks indicates a fundamental step that is about to take place. The Syrian regime is planning to tighten its grip on the Lebanese border.

The specific attacks launched by the regime on Darya, south of Damascus, Ghouta in the east of the Syrian capital and the Homs suburbs allow Assad’s regime to embrace its Lebanese security blanket. Meanwhile, sources close to Hezbollah implied the likelihood of two nearing field developments, the first being in Qusayr, which is the latest of Hezbollah’s residences in the Homs suburbs, and the second in northern Ghouta, to continue building the Damascus wall.

These developments are paving the way for a military achievement that cannot exist without political repercussions in Syria, and especially in Lebanon. The latter is standing at a crossroad between two crises, with the failure to form a new government and to reach a new electoral law to avoid a parliamentary vacuum, knowing that the parliamentary term ends on June 20.

Consequently, this chain of thought voiced by Nasrallah in his speech becomes comprehensible, starting with the regional incidents and reaching his total peace of mind vis-à-vis Lebanese developments. Nasrallah has finally assured his opponents that he is ready for anything now or anytime. Meanwhile, his opponents are still wondering about the secret behind the timing of his appearance.