Russian Deputy Foreign Minister Mikhail Bogdanov met with a wide range of Lebanese leaders during a visit to Beirut and told everyone what they wanted to hear. 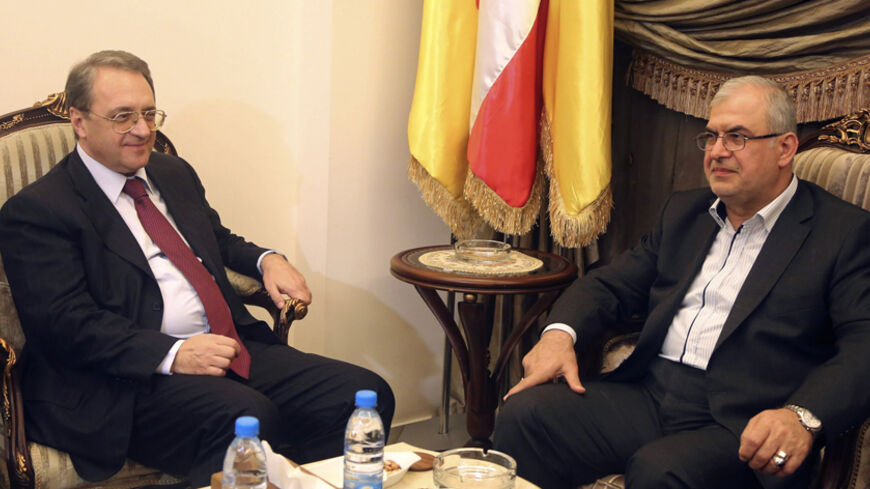 Russian Deputy Foreign Minister Mikhail Bogdanov visited Beirut for three days before moving on to Turkey and Syria. More than 20 Lebanese political figures from the different parties met with him, and he held some 10 news briefings, during which he touched on a number of issues, including the Syrian situation, the Iranian nuclear file and the Lebanese presidential elections.

His statements about Lebanon's situation were, however, characterized by vagueness. Several sources who attended meetings between Bogdanov and representatives of Hezbollah and the Change and Reform Bloc told Al-Monitor that his hosts got the impression that he “told each party what it wants to hear” about Moscow’s stance on the Lebanese situation, a practice that raised questions.

Bogdanov was all over the Lebanese news Dec. 5–7. He met with parliament Speaker Nabih Berri and then visited the Cabinet’s headquarters and met with Prime Minister Tammam Salam. He later traveled to the Foreign Affairs Ministry and visited all the political parties. He had dinner at Druze leader Walid Jumblatt’s place and spoke with the Christian leader Michel Aoun. He also had an elaborate meeting with the Sunni Future Movement parliamentary bloc and met with former Presidents Amin Gemayel and Michel Suleiman and the head of Hezbollah’s parliamentary bloc, Mohammad Raad. He also made time to visit Orthodox figures and personalities from different political orientations and sects.

People who attended these meetings noted that Bogdanov’s statements were contradictory and varied depending on the host and the place. Some issues were consistent throughout his stops, and most were general headlines, along the lines of Russia supporting Lebanon’s independence and stability and Moscow's position that there is no solution for the crisis in Syria except through dialogue. Bogdanov also asserted that Russia is counting on a final agreement between Iran and the P5+1 (the five permanent UN Security Council members and Germany) on Tehran's nuclear program.

These general headlines did not, however, satisfy his Lebanese hosts, because they were impatiently waiting to hear Russia's stance on the Lebanese crisis, especially the election of a president, pending since May 25, 2014. It was surprising that Bogdanov seemed removed from the issue, acccording to several politicians who met him and later spoke to Al-Monitor.

The information Al-Monitor received suggests that Bogdanov tried to compensate not approaching the presidential elections as a serious agenda item by seemingly agreeing with everyone on the issue. For instance, one Future Movement parliamentarian told Al-Monitor on condition of anonymity that at least Bogdanov had agreed with the movement on the pressing need to elect a president on whom all parties agree. When Future Movement members expressed their concern that further electoral delay increases all sorts of risks, Bogdanov merely seconded their opinion. He emphasized Moscow’s attempts to consolidate opinion by its calling on the different local and foreign parties.

Bogdanov was told that Lebanon can no longer afford a weak president or one who is affiliated with foreign states or does not adequately represent Christians in a way that guarantees balance among the Lebanese and fulfills the requirements of governing compacts.

Bogdanov was told that the presidency will remain vacant until conditions become suitable for electing a strong candidate who can provide solutions to Lebanon's crises. Hezbollah and Aoun believe this to be much better than proceeding to elect a weak president or someone simply willing to take the job, as such a move might make matters worse. The same sources told Al-Monitor that it was significant that Bogdanov agreed with his hosts on this point and supported them, while noting that he and Russian leaders totally understand this reasoning.

These rather discordant information raised a perplexing question: What was behind this duality in Bogdanov’s statements in Beirut regarding Lebanon? There are several possible answers.

For instance, Moscow’s envoy is well aware that progress on the Lebanese issue remains at a standstill and requires a regional settlement, which still has obviously not been reached. As a result, it might have been too early or impractical for him to take public stances or make commitments.

Another theory suggests that the purpose of Bogdanov’s visit was not aimed at launching an initiative, mediation or stance, but was simply a matter of protocol and a fulfillment of the Lebanese foreign minister’s invitation to celebrate the 70th anniversary of bilateral relations between Moscow and Beirut.

The most interesting theory holds that Bogdanov's visit was planned exclusively around Syria, not Lebanon, and that his three days in Beirut were solely to meet with Hezbollah Secretary-General Hassan Nasrallah. After all, Nasrallah is a key player in the Syrian crisis, on the ground and politically. No details were leaked about their talks, which leaves room for interpretation. Thus, Bogdanov’s wide-ranging visit to Lebanon might have only aimed at discussing Russian moves in Damascus and its plan to gather the warring parties around a new negotiating table to take a slightly different path than the Geneva conference.