Prime Minister Benjamin Netanyahu’s stubborn insistence on pushing through the nationality bill is not driven by political motives alone, but reflect his and his cohorts' belief that the Palestinians are not even a people. 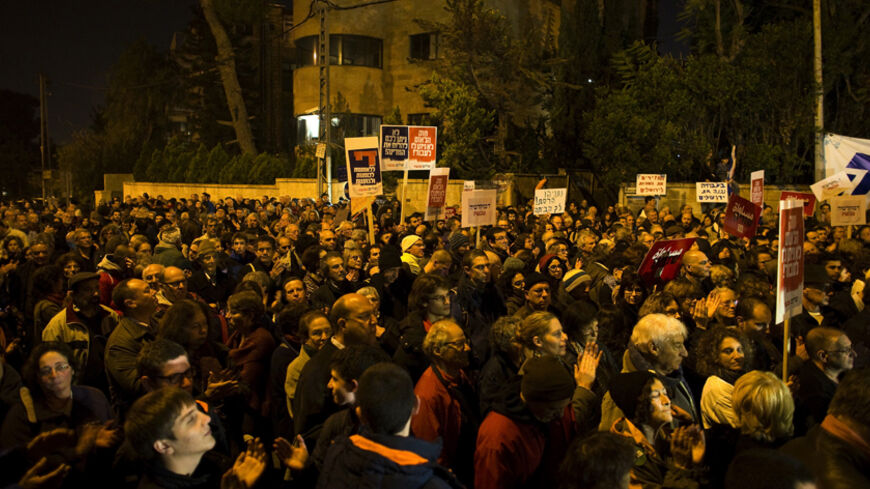 Leftist Israeli activists attend a rally against a contentious bill that would define Israel as a Jewish nation-state and enshrine certain rights for Jews, in Jerusalem, Nov. 29, 2014. - REUTERS/Ronen Zvulun

At the memorial service for Israel's first Prime Minister David Ben-Gurion on Nov. 27, former President Shimon Peres deviated from accepted protocol for such events. In the presence of high-ranking guests and journalists from Israel and abroad, Peres called the nationality bill “an attempt to subjugate the Declaration of Independence to fleeting political needs.” The criticism directly targeted Prime Minister Benjamin Netanyahu, who had also come to honor the memory of the first prime minister. It was no trivial occurrence for a former president to accuse a current prime minister of making short-term capital out of the founding document of their state’s national movement.

On the face of it, Netanyahu’s motives seem clear: the coalition is unstable, elections are on the horizon, polls indicate that the public is veering to the right and the prime minister is stomping on the gas. He wants to make sure that no one passes him from the right on the way to the ballot box. This is a legitimate interpretation, but only partial and not entirely fair. Allegedly, the move aims to siphon power from Israel's radical right by attracting votes to the moderate right. In fact, Netanyahu is working to distance the possibility of establishing a Palestinian state next to Israel.

The crux of the matter lies in comments Netanyahu made at a Nov. 24 meeting of his Likud Party’s representatives in the Knesset. The prime minister pledged that the law would protect Israel as the “nation-state of the Jewish people — and only of the Jewish people.” This message fits with what Netanyahu said in the Knesset plenary March 19. “The past cannot be changed,” he cried from the benches at a session in honor of visiting British Prime Minister David Cameron. “Not the biblical past and not the post-biblical past, and not events that occurred in the Land of Israel in the 19th and 20th centuries.” He was willing to concede that “there has been a Palestinian side since 1943,” but not a year earlier.

Denying the existence of the Palestinian people and dismissing the historic link of the Palestinians to Jaffa and Hebron is a staple in Netanyahu’s close circle. In her book “Leap of Faith: Memoirs of an Unexpected Life,” Queen Noor, the widow of Jordan’s King Hussein, writes that in a conversation with Sara Netanyahu in October 1997, the wife of the prime minister claimed that when the Jews arrived in the region, there were no Arabs there at all. According to the woman closest to Netanyahu, the Palestinians “came to look for work when we built cities. Before that, there was nothing.”

In 2011, American gambling tycoon Sheldon Adelson, probably the Jew with the most influence over Netanyahu, recommended that young people taking part in the "Birthright" project "read the history of those who call themselves Palestinians, and you will hear why [former speaker of the US House of Representatives Newt] Gingrich said recently that the Palestinians are an invented people." At the Nov. 9 conference of the Israeli-American Council held in Washington, Adelson, the publisher of the pro-Netanyahu paper ''Israel Hayom," claimed that the Palestinian people had come into this world only to destroy Israel.

Obviously, a made-up people whose only goal is to destroy another people has no national nor legal rights to any land or any right of return. In a speech he delivered in March at the annual meeting of the American Israel Public Affairs Committee, Netanyahu drew a link between recognition of Israel as the national state of the Jewish people and the Palestinian claim to right of return. He claimed that the refusal of Palestinian President Mahmoud Abbas to recognize Israel as the state of the Jewish people lies in a dark conspiracy to flood Israel with Palestinian refugees. The Palestinian side argues that acceding to Netanyahu’s demand constitutes an admission that they are not even “a people,” but rather an amalgam of nationless individuals. Obviously, no Palestinian leader worth his salt would lend credence to such claims, and thus the peace process comes to an end. And to complete the job, the nationality law will put an end to the nightmare of a “terrorist state” for an “invented people,” and the dream of a greater Zion will be salvaged.

But reality is not so simple. Israel's Center for Educational Technology, a nongovernmental organization established under a 1971 government regulation and now operating independently, defines a “nation-state” as “a sovereign state of a people, most of whom live within its boundaries and constitute a majority within it.” It explains, “The nation-state provides symbolic or legal priority to the values of the nation and to its common ethnic foundations.” Israel is indeed a sovereign state, but many if not most of the world's Jewish population lives outside its borders. More to the point, to this day, the State of Israel does not have an agreed-upon and recognized border. During Netanyahu’s terms in office, the prospects of agreeing on a permanent eastern border are slim to none. Therefore, the Jewish people do not constitute a majority between the Mediterranean Sea and the Jordan River, and they are gradually losing their legitimacy to prioritize the values of the nation and their common ethnic foundations.

At the Ben-Gurion memorial service, Netanyahu took a page from the book of the prime minister who stood at the cradle of the state’s birth. He said that Ben-Gurion, too, “knew that Israel is the state of the Jewish people.” Netanyahu left out that Ben-Gurion agreed to the UN’s partition plan and also rejected suggestions to call Israel a Jewish state. Vive la différence.