Netanyahu campaigning early for next term 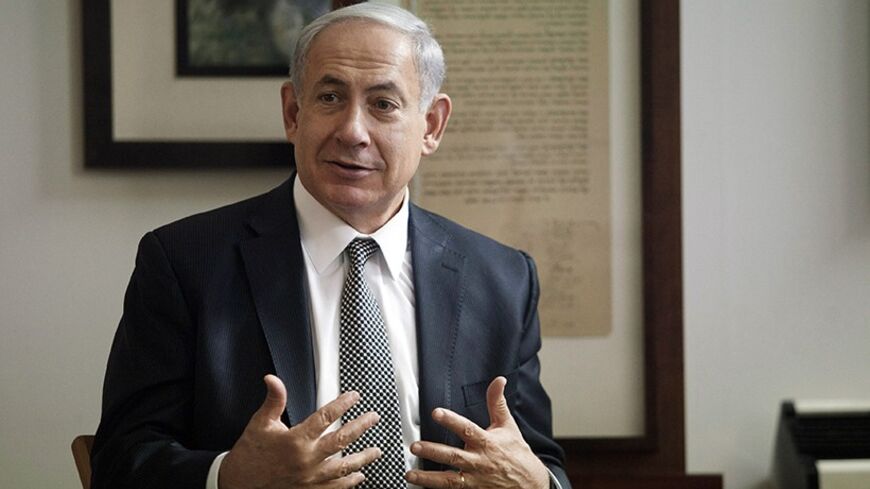 Israeli Prime Minister Benjamin Netanyahu delivers his speech during a news conference in the Independence Hall of Israel in Tel Aviv, May 1, 2014. - REUTERS/Dan Balilty

At the end of my Al-Monitor article marking Israel’s 66th Independence Day on May 5, I quoted the responses of two past Israeli prime ministers, David Ben-Gurion and Menachem Begin, to the United Nation’s partition resolution of Nov. 29, 1947.

Ben-Gurion’s enthusiastic response in favor of the resolution represented the pragmatic approach, also called the “Mapai Party” (precursor of the Labor Party) approach: “another dunam, another goat.” In a speech in April 1955 to mark Israel’s seventh Independence Day, the country’s first prime minister said, “History is not made with words but with deeds.”

In contrast, Begin represented the dreamy revisionist approach, characterized in the words of the song “The Left Bank of the Jordan,” one of the most famous anthems of the Beitar youth movement: “Two banks has the Jordan: This is ours and that is as well.”

Prime Minister Benjamin Netanyahu has managed to turn things upside down. Under his leadership, the left is perceived as cut off from reality. Jews who advocate an end of the conflict with the Palestinians and reconciliation with the Arab world are considered delusional. The very word shalom (peace) became a rude expression.

At the same time, the right is portrayed as being a camp well-connected to reality. On the one hand, it builds homes in the occupied territories, but at the same time it also knows how to ''manage'' the peace process, which is enough to preserve Israel’s foreign relations, including its diplomatic relations with two neighboring Arab countries, Egypt and Jordan. Netanyahu would have had a hard time doing this — if he could even do it at all — without the active help of his partners from that political range called the “center,” including Finance Minister Yair Lapid and Justice Minister Tzipi Livni. The populist demands that Netanyahu placed at the spearhead of his negotiation position — namely recognition of Israel as a Jewish state and a united Jerusalem — pushed the Labor Party into a defensive position, where it is effectively paralyzed.

By using verbal means and placing the symbolic before the practical, Netanyahu is not only able to consolidate forces under his long leadership but to actually shape reality. His demand that Palestinian President Mahmoud Abbas recognize Israel as a Jewish state pushed major issues of practical importance such as borders, Jerusalem and refugees to the side. Once he was able to focus the public debate in Israel on the Palestinians’ refusal to comply with his demands, Netanyahu could attempt to shift his success to the local arena. There are indications his declaration that he intends to promote a "basic law," which would determine that Israel is the nation-state of the Jewish people, is doing precisely that.

“Of course, there are those who do not want the state of Israel to be defined as the nation-state of the Jewish people,” said Netanyahu at the start of the most recent Cabinet meeting on May 4. “They want a Palestinian nation-state to be established alongside us and that Israel should gradually become a binational, Arab-Jewish state inside shrunken borders. But I simply say that one cannot hold the national stick at both of its national ends. They cannot say that they want to separate from the Palestinians to prevent a binational state, which has a certain logic, and also sanctify a binational, Jewish-Arab state within the permanent borders of the State of Israel.''

It is safe to assume that in speaking about “they,” Netanyahu was also referring to those “leftists,” who are expected to oppose his proposal, and “who have forgotten what it means to be Jewish,” as Netanyahu declared in October 1997. Firing off poison arrows at the left has been proven to pay off politically, but it is even more important to examine the actual claim — according to which it is impossible to keep hold of the national stick from both ends. This is certainly a valid claim, logically speaking, but in reality Netanyahu advocates a policy that exposes him precisely as the one wishing to hold the rope by both its national ends.

In the virtual-diplomatic world, Netanyahu talks in favor of establishing a Palestinian state alongside the state of Israel. In the real world, however, he is signing off on plans to expand and perpetuate the settlements, initiatives that impede the establishment of such a state.

Furthermore, Netanyahu’s demand in the negotiations that the Palestinians recognize Israel as the nation-state of the Jewish people, sabotages any chance of a diplomatic arrangement that will lead to a separation. That very same separation intended to prevent Israel from becoming a binational state. A separation which, according to Netanyahu himself, carries a “certain logic” to it. But since this ''certain logic'' is not enough so as to lead Netanyahu into separating also from those territories where that population lives — the only way left for him is to ensure the Jewish character of Israel through legislation.

The exact wording of Netanyahu’s proposed law has yet to be formulated; however, some indication of the spirit of the law might be found in the formula of the Basic Law bill, “Israel: The Nation-State of the Jewish People,” which was submitted in July 2013 by Knesset members Ayelet Shaked (HaBayit HaYehudi), Yariv Levin (Likud) and Robert Ilatov (Yisrael Beitenu).

They propose that “Hebraic law will serve as a source of inspiration for legislators and judges in Israel,” and that whenever the court is unable to find guidance for legislation, be it in an explicit ruling or clear parallels with such existing ruling, it will make its decisions “based on the principles of freedom, justice, integrity and peace as found in the heritage of Israel.” Subjecting the rulings of Supreme Court justices to the values of Jewish religious law would make it difficult for the state of Israel to exist as a democracy that grants equality to all of its citizens. It is impossible to tell today whether the judge will prefer in the future a dogmatic approach or a liberal one of the Hebraic Law.

Accepting another clause in that proposed law, which limits the right to exert national self-determination in the State of Israel to the Jewish people, could be translated into practical measures against Palestinians who are Israeli citizens, attempting to express their collective rights.

In 1915, national poet Hayim Nahman Bialik wrote a founding article titled “Revealment and Concealment.” Generations of Israeli students studied this essay, which was a compulsory topic on the national matriculation examinations. The article begins, “Every day, people sow tangible words and their various combinations to the wind, intentionally and before they are thought through, but very few people know what those words were in their glory days.”

This method of sowing words to the wind yields Netanyahu short-term political returns, but ensures a major loss to the large public. At the same time, Netanyahu’s long term in office, which is approaching Ben-Gurion’s record, is evidence that this approach actually works.