Once a young, creative and peace-aspiring country, Israel is missing the spirit that animated its founders. 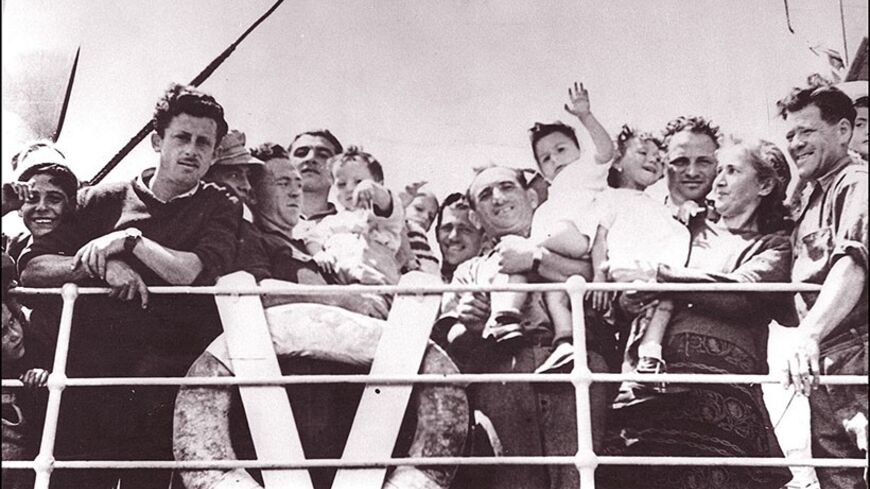 A crowd of Jewish immigrants waves from the deck of trawler Andria as they arrive in Tel Aviv harbor, May 20, 1948. - AFP/Getty Images

The first 66 years in the life of a state are a period of mentoring and adaptation, of putting down roots and of growth. Not so in Israel’s case. Few states, if any, have reaped a comparable harvest of accomplishments in the first seven decades of their existence. A state born on the morrow of the Holocaust, on a land poor in resources but saturated with the blood of its fighters, became in an instant fertile soil for new Hebrew creation, for a flourishing industry and a burgeoning scientific hothouse. The security threat that kept hovering over the young state, as well as the economic, social and cultural challenges, turned it into a vibrant, creative, ambitious entity.

The Middle East arms race, Palestinian terror and Arab refusal to make peace sucked up the best of the state’s human resources. Defense considerations and the politics of fear left no room for diplomatic initiative and the politics of hope. For most of its first 40 years, the Western world — with the United States at its head — stood unquestioningly at Israel’s side. In the first 20 years after its conquest of the territories, Israel was the darling of the international community and, of course, of the Jewish communities around the world. The settlement enterprise was considered in those years an integral part of the “startup,” dubbed in Orwellian parlance “enlightened occupation.”

Since the first intifada, which broke out at the end of 1987 and was accompanied a year later by the Palestinian Declaration of Independence, the roles keep reversing. Israel started showing early signs of weariness and complacency, and the Palestinians took the initiative and started displaying creativity. From a terror organization with which contact was banned by Israeli and US law, the PLO turned into a recognized ruling party whose diplomatic representatives are scattered around dozens of world capitals. The UN repeatedly condemns the construction in the settlements, and more and more states and organizations around the world are joining the boycott of settlement products. The Palestinian signing of the Oslo Accord in 1993 brought about a split of Israeli society and division among the Jewish communities in the West. The member states of the Arab League and of the Organization of Islamic Cooperation are adhering to the 2002 Arab Peace Initiative and providing the Palestinians with total backing to proceed, guided by the beacon of this plan.

The last diplomatic initiative with which Israel has been credited in the arena of the conflict was its unilateral withdrawal from the Gaza Strip in the summer of 2005. Since then, Israel excels at imposing punishments and making threats in response to Palestinian initiatives. In November 2012, 138 states voted in favor of Palestine’s acceptance by the UN as a nonmember observer state. Besides Israel, only the United States, Canada, the Czech Republic, the Marshall Islands, Micronesia, Nauru and Palau voted against the resolution, which grants Palestine a status similar to that of the Vatican. In addition to its symbolic significance, the move strengthened the Palestinians’ international standing and their demand for an end to the occupation. And what did Israel do? It berated the world for failing to demand that the Palestinians recognize Israel as the nation-state of the Jewish people, it continued to expand the settlements and display helplessness in dealing with violent settlers who perpetrate acts of terror known as “price tag.” Despite it all, the Palestinians insisted on staying at the negotiating table, showed restraint and rubbed their hands in glee at the international community’s growing criticism of Israel.

The expected failure of the initiative by US Secretary of State John Kerry found Israel once again with no alternative diplomatic plan. While Israeli chief negotiator Tzipi Livni dashed from one television studio to another in a pathetic attempt to excuse her continued participation in the right-wing government, the Palestinian Authority (PA) joined a series of international treaties. While Israeli Prime Minister Benjamin Netanyahu was working hard to keep his coalition whole, Palestinian President Mahmoud Abbas was taking advantage of Hamas' weakness to establish a unity government. The reconciliation agreement was designed to refute claims by those opposed to the recognition of a Palestinian state that the PA does not control significant portions of.

An exhaustive opinion written in 2012 by the Jerusalem Institute for Israel Studies regarding the issues raised by the Palestinian application to the UN stresses that the lack of clarity or the dispute over borders do not negate the existence of the state.

The study notes that a Palestinian state could provide the International Criminal Court with authority to try the war crime of transferring the population of the occupying state to the occupied territory — the main reason why Israel is not part of the ICC Statute was the inclusion and wording of this article. Nonetheless, the Palestinian state will be held responsible for violations of international law on the part of organizations operating from its territory, or for failing to prevent armed activity.

In addition, with the establishment of a Palestinian state within temporary borders, Israel will not be considered an occupying power of certain areas in the West Bank. The Palestinians will be responsible internationally for whatever takes place there, which will increase the mutual interest of coordination and cooperation to a high degree, even without a permanent agreement.

But it does not occur to anyone in the government in Jerusalem that Israel should welcome the establishment of a Palestinian state and conduct serious negotiations with it over borders, Jerusalem, security and the refugees. They prefer to sanctify the status quo and bequeath the conflict to future generations.

Kerry’s apology for using the term “apartheid” does not change the fact that the status quo works in Israel's disadvantage. As Kerry said, “a unitary state winds up either being an apartheid state with second-class citizens, or it ends up being a state that destroys the capacity of Israel to be a Jewish state.”

Data issued by Israel’s Central Bureau of Statistics (CBS) in advance of the state’s 66th Independence Day, along with data of the Palestinian CBS, indicate that Israel is a “Jewish state” only because the residents of the territories who live under its occupation are devoid of basic political rights. Out of a total of 12,610,000 residents between the Mediterranean and the Jordan River, 6,135,000 are Jews (48.65%), 5,824,000 are Arabs (46.19%) and 651,000 (5.16%) are defined as “others” — non-Arab Christians, members of other religions and those with no religious affiliation.

After the UN vote on the Partition Plan on Nov. 29, 1947, which allotted Israel 55% of mandatory Palestine, the small Jewish community in the land welcomed the decision with song and dance. The Arabs reacted with war declarations and opened war on all fronts. The political leadership in Israel was divided. The commander of the pre-state military underground organization Etzel, Menachem Begin, expressed the revisionist stance, which demanded to battle over all the land of Israel's territories. “We are not happy. And in our great sorrow lies our greatest historic mission,'' he declared. ''Because the homeland has not been freed. The homeland was bisected.”

David Ben-Gurion, then-chairman of the Jewish Agency, adhered to a pragmatic approach. He knew that the freeing of the entire homeland would not enable implementation of the historic mission of establishing a Jewish and democratic state. Ben-Gurion, who later became Israel's first prime minister, said the partition resolution was “the greatest achievement of the Jewish people in a single moment of its long history since becoming a nation.” And indeed, the UN resolution paved the way for the establishment of an independent, prosperous State of Israel. Sadly, 66 years after the establishment of the state, the current state leadership is following in Begin’s footsteps, while the Palestinian leadership has adopted Ben-Gurion's legacy.