Statements by opposition leader Isaac Herzog supporting the demand that the Palestinians recognize Israel as a Jewish state might pave his way into Benjamin Netanyahu's government, but be detrimental to negotiations. 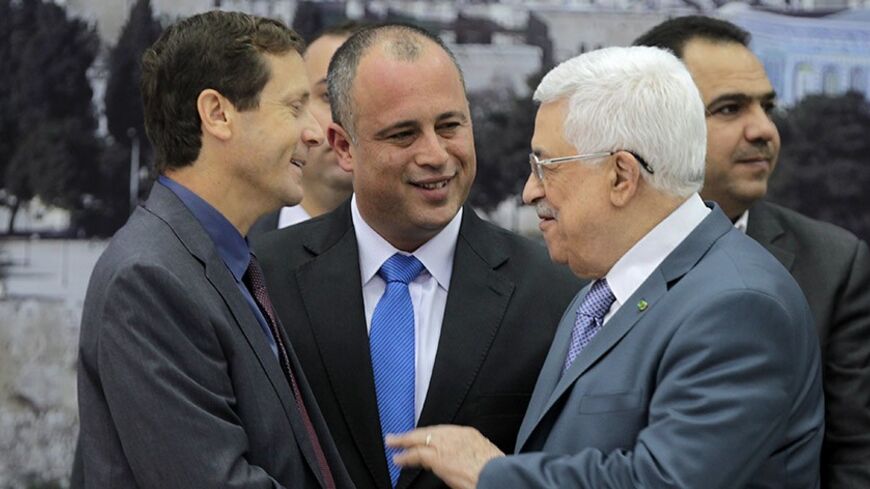 It’s all a question of timing. This is how Israeli opposition leader Isaac Herzog explained, in a Feb. 7 interview with the website NRG, Palestinian Authority President Mahmoud Abbas' declaration in a Feb. 2 interview with The New York Times that Israel’s demand to recognize it as a Jewish state was “out of the question.”

Ehud Olmert was also asked about Abbas' declaration. The former prime minister expressed with certainty on Feb. 7 that “at the moment of truth” — meaning, “when the Israelis and Palestinians will be on the verge of signing a permanent agreement” — a solution will be found to the recognition problem, as well. What is that “timing”? When will the “moment of truth” come?

Based on the interview given by Secretary of State John Kerry to The Washington Post on Feb. 2, crunch time will not arive with the anticipated presentation of the US framework in the coming weeks. Kerry said the sides will be allowed to “express reservations about the US-drafted parameters” and explained that this process is the only way for Prime Minister Benjamin Netanyahu and Abbas “to politically be able to keep the negotiations moving.”

If there is any truth to the reports that the framework will include the two words “Jewish state” or “the nation-state of the Jewish people,” one can assume that Abbas will express total reservation. Matti Steinberg, a Middle East scholar who served as adviser on Palestinian affairs to four Shin Bet directors, told Al-Monitor that he does not believe that presenting “this obstructive condition,” in his words, will enable Abbas “to politically keep the negotiations moving.”

On top of that, the Israeli Supreme Court in October rejected the existence of an Israeli nationhood distinct from the Jewish identity of the State of Israel. It determined that from its inception, Israel was “immersed” in Jewish content. In other words, “the State of Israel” is the same as saying “a Jewish state,” so there’s no need to elaborate. In addition, in the 2002 Arab Peace Initiative, which offers Israel peace and normalization in return for a withdrawal to the 1967 borders (with agreed-upon border changes, or land swaps, as was later added to the initiative), there’s no mention of recognizing Israel as a Jewish state.

This demand has no precedent in the peace treaties with Egypt and Jordan, both of which have a distinct interest in and close affinity with the Palestinian issue. It is highly doubtful that such a demand would have enabled the leaders of those states to sign these agreements.

Israel’s first prime minister, David Ben-Gurion, who was also the leader of the Labor movement, was adamantly opposed to adding any attributes to the name of the state describing Israel’s Jewishness. Now, Herzog, his successor in the office of Labor chairman — who also aspires to occupy Ben-Gurion’s chair in the prime minister’s office — declares (in the NRG interview), “The demand that the permanent agreement include Palestinian recognition of Israel as the nation-state of the Jewish people is justified, and I support it.” Herzog even said he believes Kerry “will find a formula which will bring the Palestinians to recognize a Jewish state.” His remarks ignore the question of the identity of more than 1 million Israeli Arab citizens, including the tens of thousands who supported him in the latest Labor primaries. Al-Monitor had the opportunity to pose two questions to Herzog:

Al-Monitor: Do you, indeed, support the demand for recognition of Israel as the nation-state of the Jewish people?

Herzog: I think that in the permanent agreement itself, it’s legitimate to include the definition of Israel as the nation-state of the Jewish people, and of Palestine as the state of the Palestinian people. This is exactly how it’s defined in the Geneva agreement and stems directly from UN Resolution 181 of Nov. 29, 1947. Nonetheless, I think it’s wrong to demand this as a condition for negotiations, and Bibi made a serious mistake on this issue in the past. [In the 2003 Geneva Accord, which is a voluntary, non-binding agreement, there’s no explicit demand for Palestinian recognition of the State of Israel as a Jewish state].

Herzog: I bring up the Arab and Israeli peace initiatives all the time and get positive feedback. I’m in favor of a creative formula which doesn’t condition acceptance of the document of principles on Palestinian recognition of a Jewish state, but you should know that a nation-state is a unique thing that requires a ratifying statement.

Steinberg, responding to Herzog's response to the first question, lashed out, “The learned distinction of opposition leader Herzog between the conditions for a framework agreement and the conditions for a permanent agreement is rubbish.” He added, ”What’s the point of gaining a few additional months of negotiations, if the possibility of reaching an agreement is shelved within several months?” He suggested, therefore, that the Labor Party integrate into the Likud Party and conduct a dignified funeral for the two-state principle.

Herzog’s answer to the second question implies that the dispute between him and Netanyahu regarding the condition of recognizing Israel as a Jewish state is purely a matter of tactics, not of principle. After publicly expressing support, in principle, for Netanyahu’s demand, how will Herzog be able to criticize Netanyahu’s reservations about the forthcoming US framework document if it lacks the clear condition of recognition of a Jewish state?

It’s unlikely that the reservations will enable Abbas to “politically be able to keep the negotiations moving,” as Kerry said, and to overcome this obstacle. On the other hand, they might, of course, make it easier for Herzog to overcome the chasm between the opposition benches and the safe haven of the government table in the Knesset. Herzog, in response, said, “I am not hatching any plot to join the government, and there’s no need for guesswork. Let’s await developments.”