Israeli Prime Minister Benjamin Netanyahu uses the excuse of self-defense to target other regimes and to make a mockery of decisions by the international community. 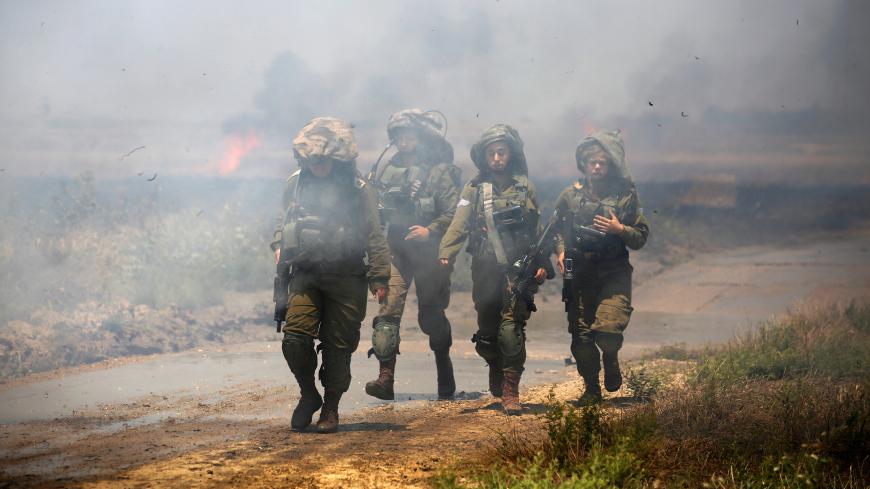 Israeli soldiers patrol near a burning field on the Israeli side of the border between Israel and Gaza, May 14, 2018. - REUTERS/Amir Cohen

Following his May 9 Kremlin meeting with Russian President Vladimir Putin, Israeli Prime Minister Benjamin Netanyahu told reporters he had explained to his host that “it is the right of every state, certainly it is Israel's right, to take such steps as are necessary to defend itself against this aggression.” At almost the same time, Transportation and Intelligence Minister Yisrael Katz was explaining, “Only offensives now, today, can prevent violence and war tomorrow.” Education Minister and defense Cabinet member Naftali Bennett bolstered their remarks, telling a gathering of young Israelis, “If I had to summarize the policies of the Israeli government and the security establishment in this era, I would say, 'If one rises up to kill you, kill him first.'”

Obviously, Iran did not deploy missile launchers throughout Syria out of any peaceful goals. However, where is the famous “red line’’ — those hostile military actions unacceptable by Israel? What turns a series of (allegedly Israeli) strikes in the sovereign territory of a neighboring state into “self-defense”? If, as Katz argued, offensives today can avert war tomorrow, a responsible (Israeli) government must also bomb the missiles deployed by the Iranian-backed Hezbollah militia in southern Lebanon. And what about the long-range missiles Iran can launch from the outskirts of Tehran at Israel’s nuclear facility near the town of Dimona?

If the name of the game is “self-defense,” then Iran, too, might have good reasons to attack Israel. It is no secret that had it not been for the strenuous objections by the heads of Israel’s defense agencies and late President Shimon Peres, Netanyahu and his former Minister of Defense Ehud Barak would have probably bombed Iran’s nuclear facilities. At this point, we should also remember that the government of Israel — not of Iran — was the one that thwarted a conference planned in Helsinki for 2012 on a nuclear-free Middle East, supported by former US President Barack Obama. Not only that, according to foreign media reports, Israel is the only country in the Middle East equipped with dozens of nuclear bombs, and the only one consistently refusing to sign the Nuclear Non-Proliferation Treaty. Israel is also a leading weapons exporter to murderous regimes in Africa and elsewhere. All, of course, for the sake of self-defense.

However, one can discern a different motivation for Israel’s actions against Iran between the lines of the boastful chatter by members of the defense Cabinet. Katz said the government’s strategy was to “act to remove Iran from Syria.” Bennett went a step further, suggesting the Iranian people emulate the grassroots Israeli protest movement called Four Mothers, whose pressure is credited with Israel’s decision to pull its forces out of Lebanon 18 years ago. “If you do a Four Mothers and get out of Syria, you might somehow survive as a regime,” the minister promised. On the other hand, “If you keep wasting billions and impose sanctions on yourselves because of a country located dozens of kilometers from you, the regime will be replaced.”

In the milieu of Jerusalem’s celebrated champion US President Donald Trump, this policy is known as “regime change.” Prior to becoming Trump's national security adviser, John Bolton said in July 2017 that the United States must work to ensure a change of regime in Iran “so that the Islamic Republic will not last till its 40th birthday” next year. Bolton and Trump’s attorney Rudolph Giuliani are both supporters of the Mujahedeen-e-Khalq, a main Iranian opposition group operating abroad. As a member of Congress, current Secretary of State Mike Pompeo suggested in 2014 that the United States mobilize an international coalition to strike Iran’s nuclear facilities. He even mentioned the number of aerial sorties that would be required to destroy them (under 2,000).

In a May 10 Washington Post opinion piece, senior analyst Fareed Zakaria wrote, “Three of Trump’s closest advisers have views on Iran that are so extreme that it is hard to think of anyone outside of Saudi Arabia or Israel who shares them.” Netanyahu feels at home with the members of Trump’s aggressive, perhaps even verging on the megalomaniacal, inner circle. For the past year, the prime minister has repeatedly crowned Israel “a rising world power,” a comment reminiscent of the dream espoused by Israel’s first Prime Minister David Ben-Gurion, borne on the euphoria of Israel’s 1956 conquest of the Sinai Peninsula, about “the Third Kingdom of Israel."

Israel’s record in terms of Middle East regime change is hardly stellar. Israel is still paying the price of “the new order” then-Defense Minister Ariel Sharon sought to instill with his military invasion of Lebanon in 1982 in order to hand the regime to the country’s Maronite Christians. It ended with the expulsion of the PLO from southern Lebanon under the leadership of Yasser Arafat. Instead, we got the Iranian-backed Hezbollah on our northern border. To dislodge the Palestinian Fatah movement from the West Bank and Gaza Strip, the unity government of Yitzhak Shamir, Shimon Peres and Yitzhak Rabin encouraged Muslim clerics to establish Hamas in the 1980s and 1990s, which has since turned into a terror organization. Defense Minister Avigdor Liberman from the West Bank settlement of Nokdim speaks openly about his aspirations to replace Palestinian President Mahmoud Abbas with a more suitable — for Israel, of course — figure. Israel’s cruel Gaza siege policy, just like decades of international sanctions on Iran, did not give rise to regimes that were any friendlier to the United States or Israel. There is no indication this could happen in the foreseeable future.

Obviously, the restraint displayed by Iran’s rulers vis-a-vis Israel’s recent attacks on Iranian forces in Syria does not stem from recognition of Israel’s right to self-defense. The Iranians are letting Netanyahu celebrate Trump’s decision to violate the Iranian nuclear deal. The other five partners to the deal are watching from the sidelines as Netanyahu cheers on the American president as he displays his contempt for the United Nations’ resolutions on Jerusalem and pulls the United States out of the consensus enjoyed thus far by the Middle East Quartet (composed of the United States, Russia, the UN and the European Union).

On these two critical issues — the clash with Iran and the conflict with the Palestinians — Netanyahu, under criminal investigation by police, is betting on volatile Trump. However, even their mutual patron, casino mogul Sheldon Adelson, cannot promise them that their gamble on a regime change in Tehran, Ramallah and Gaza will succeed. And, as always, their subjects will pay the price once they lose.