Pentagon braces for Iranian response to Trump withdrawal from deal

The US president’s decision to reimpose sanctions is sparking concerns that Tehran could retaliate against US assets and allies. 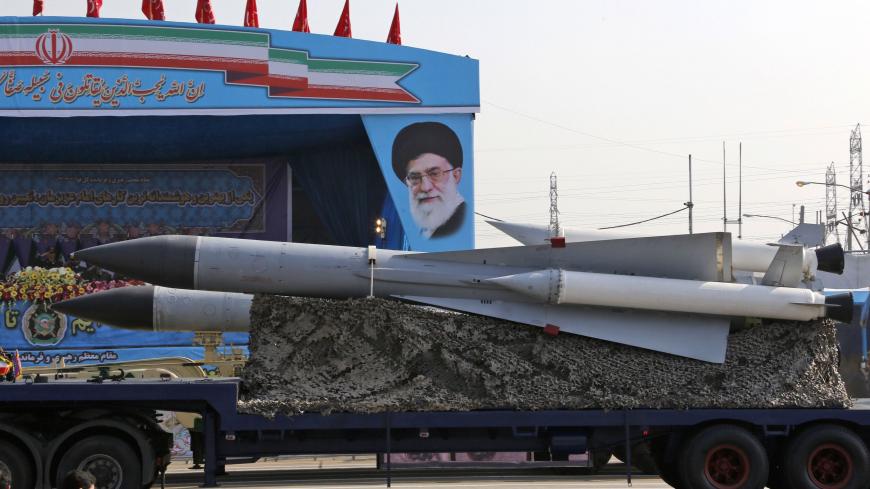 An Iranian military truck carries surface-to-air missiles past a portrait of Iranian Supreme Leader Ayatollah Ali Khamenei during a parade on the occasion of the country's annual army day on April 18, 2018, in Tehran. - GETTY/Atta Kenare

President Donald Trump’s announcement today that he is pulling out of the nuclear deal with Iran is sparking concerns that Tehran could retaliate against US troops and allies in the Middle East.

As the White House prepares to reimpose sanctions lifted under the agreement, experts fear Iran could draw upon the Islamic Revolutionary Guard Corps or proxy militias such as Hezbollah to target US forces in places such as Iraq, Syria, Yemen and Afghanistan. Israel and US Gulf allies, which have long lobbied against the deal and applauded today’s decision, may also be at risk.

"I sure as hell hope that the Trump [National Security Council] has a [government]-wide plan in place to deal with potential Iranian dialing up the heat in the region," tweeted Kelly Magsamen, formerly the Iran director at the National Security Council under Presidents Barack Obama and George W. Bush. "Huge risk to our allies and forces."

Melissa Dalton, a former Pentagon official and now senior fellow at the Center for Strategic and International Studies, agreed.

“When [the Iranians] feel like they have their backs against the wall, typically, they lash out,” she told Al-Monitor. “It is reasonable to expect that Iran will leverage its various assets and capabilities in the region.”

A Pentagon spokesman declined to comment on whether Central Command planned to adjust force protection levels for American troops in the region, but said that “[US] forces are more than capable of defending themselves should the need arise.” British Maj. Gen. Felix Gedney, deputy commander of the US-led coalition fighting the Islamic State in Iraq and Syria, told Pentagon reporters today that he’d seen “no change” in Iranian activity in Syria in recent days.

“Today, we have definitive proof that this Iranian promise was a lie,” Trump said when announcing the US withdrawal. “Last week, Israel published intelligence documents long concealed by Iran, conclusively showing the Iranian regime and its history of pursuing nuclear weapons.”

In a statement, the White House said the United States is seeking a new deal that forces Iran to cease ballistic missile development, halt support to Shiite proxies and stop calls to destroy Israel in addition to a handful of other requirements. Iranian President Hassan Rouhani, for his part, said he planned to remain in the 2015 deal with Britain, France and Germany, whose leaders huddled on a conference call this afternoon. But he also made clear that Iran would continue to pursue its strategic interests in the region, which include supporting US antagonists such as President Bashar al-Assad in Syria and the Houthis in Yemen.

“If the US’ goal is for our country to have no independence and influence in the region,” the Iranian leader said in a Monday speech broadcast on state TV, “our people will stand against them as fiercely as they have done over the past 40 years.”

Trump administration officials also adopted a strident tone after the president’s remarks, which hinted at the need for regime change in Tehran.

“This has been for many years the central banker of international terrorism,” national security adviser John Bolton said at a briefing after Trump’s announcement. “To really deal with this threat, you have to go after the whole thing.”

Bolton denied, however, that pulling out of the deal was a precursor to a US invasion.

Meanwhile, some lawmakers explicitly urged a military buildup as the threat of conflict with Iran increases.

“Now that the president has decided that the United States will withdraw, we must have two critical priorities,” House Armed Services Chairman Mac Thornberry, R-Texas, said in a statement. “One is to further enhance our own military capabilities. The other is to strengthen our alliances.”

Experts say a head-on collision with US forces remains unlikely. Yet 2,000 US troops in Syria have faced resurgent attacks from Iranian-backed groups over the past year, including at al-Tanf base on the Iraqi border. Some believe Iran could target US forces operating near the Syrian regime’s largest oil field.

“That’s where the fires are going to get lit,” Phillip Smyth, a fellow at the Washington Institute for Near East Policy, told Al-Monitor. “The Iranians are taking this now as 'we’re going to do some more covert stuff.'"

Iran could also increase maritime activity against US assets in the Arabian Gulf, which had dropped precipitously in recent months. Iran has also launched more Scud missile attacks on Saudi Arabia and buzzed the US aircraft carrier Dwight D. Eisenhower more than a dozen times last year.

Elsewhere, Iran has dispatched hundreds of elite officers to Iraq to help train Shiite militias, US intelligence officials told the Pentagon’s inspector general, as 5,200 American troops began leaving the country ahead of this weekend’s elections.

Experts say Iran is more likely to continue to pursue its current strategy through proxies and play to international sympathies over the collapse of the deal. Iran could also pursue new capabilities, such as nuclear-powered submarines, instead of an assault on US troops.

“Picking a fight for the US makes no sense for them,” said Kenneth Pollack, a resident scholar at the American Enterprise Institute. “It just gives us an excuse to clobber them.”