The Donald Trump administration has reportedly asked Egypt to contribute money and troops to the Syria fight even as President Abdel Fattah al-Sisi has proven a challenging ally in battling the Islamic State at home. 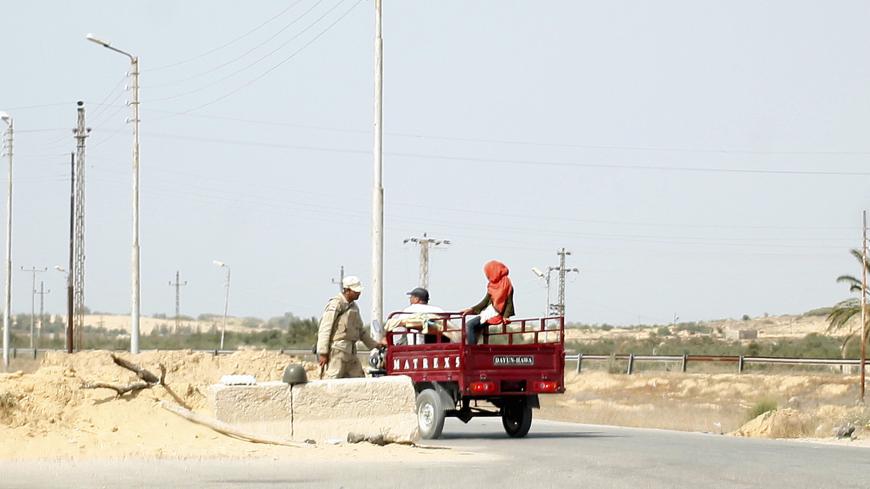 An army soldier is seen talking to locals at a checkpoint between the northern Sinai cities of el-Arish and Sheikh Zuwayed, May 25, 2015. Authorities in the Sinai Peninsula are battling insurgents who support the Islamic State, the militant group that has seized parts of Iraq, Syria and Libya. - REUTERS/Asmaa Wagui

President Donald Trump’s announcement of a US-led strike on suspected Syrian chemical weapons sites last week signaled a changing of the guard in the war-torn country. As missiles struck three Syrian facilities, the US commander-in-chief said he would seek to hand off more responsibility in the yearslong conflict to Arab partners.

As the dust cleared from more than 100 American, French and British precision-guided missiles, The Wall Street Journal reported that national security adviser John Bolton soon got on the phone with top Egyptian officials to ask for Cairo to contribute troops to the US-led effort to defeat the Islamic State (IS) in Syria’s northeast.

“We have asked our partners to take greater responsibility for securing their home region, including contributing large amounts of money for the resources, equipment and all of the anti-[IS] efforts,” Trump said. “Increased engagement from our friends, including Saudi Arabia, the United Arab Emirates, Qatar, Egypt and others can ensure that Iran does not profit from the eradication of [IS].”

The White House has asked those Arab nations to contribute funds and troops to stabilize Syria after 2,000 US troops leave the country. But Saudi Arabia and the United Arab Emirates remain embroiled in Yemen, and Egypt’s weak commitment to the terror fight has frustrated the United States despite $1.3 billion in annual military grants.

Dating back to the Barack Obama administration, experts say the Pentagon has struggled to get Egypt’s armed forces to deal with a lingering terrorist threat despite repeated high-level visits to the country and efforts to realign military doctrine to fight Islamist insurgents.

The Trump administration has continued Obama-era policy to get Egypt to focus on expelling Islamist insurgents that exploited the country’s power vacuum to gain a foothold in the Sinai Desert by limiting expensive defense purchases. In September, the Pentagon hosted a scaled-down version of Operation Bright Star, a bilateral military exercise that had been suspended since 2013, reshaping the 10-day mission to focus on dealing with terror.

“What the Egyptians would like to do is kill their way out of the problem,” said Kenneth Pollack, a resident scholar at the American Enterprise Institute, a Washington think tank. “Humanity has learned time and again that you cannot kill your way out of a terrorist or insurgency problem.”

Ever since the Obama administration lifted suspended deliveries of large-scale military systems on Cairo in 2015, handed down after violence against Muslim Brotherhood protesters, Egyptian military officials have pressed their American counterparts for high-value military technology such as surveillance drones, former US officials told Al-Monitor. Meanwhile, Egyptian officers have mostly rejected repeated efforts to apply counterinsurgency tactics that were first popularized by Gen. David Petraeus during the Iraq troop surge of 2007 and focused on minimizing civilian casualties and building local communities, citing equipment shortages.

“They believed that we had technology that didn’t exist, that was out of a sci-fi novel,” Andrew Miller, a former National Security Council director for Egypt, told Al-Monitor. “Some technology that if they got their hands on it would change the situation on the ground," Miller said.

Despite the resumption of US-led exercises and Bolton’s reported call with Cairo last week, military ties with Egypt under Trump appear to be backsliding. Last year, then-Secretary of State Rex Tillerson reprogrammed nearly $96 in military and economic aid and withheld another $195 million in Foreign Military Financing (FMF) after Sisi failed to meet human rights thresholds outlined by Congress and passed a harsh nongovernmental organization law over US opposition.

Lawmakers have also added language to the foreign operations funding bill for next year that calls for a probe into Egypt’s longstanding ties with North Korea.

At the same time, the terrorist threat in Sinai has become increasingly challenging, with gunmen killing 305 mosque-goers in November in the deadliest attack ever on Egyptian soil. Since then, The New York Times reported in February that Sisi had approved more than 100 Israeli airstrikes in the desert province.

In recent years, Congress has also probed the viability of the Egyptians as partners on human rights grounds. Sen. Patrick Leahy, D-Vt., as far back as 2015 called into question whether the Pentagon could legally supply units that had committed extrajudicial killings in Sinai with the guns it would need to succeed on the ground in Syria. The State Department’s annual country-by-country human rights report, released April 20, said an Egyptian drone strike in Rafah killed 10 civilians in January and an artillery shell that exploded on a crowded home later that month killed eight people.

“The [Department of Defense's] perspective was that the priority placed on human rights made the problem more difficult,” Miller said. “With or without that scratchiness, the Egyptians were a difficult partner.”